That saying “everyone knows someone or is related in some way” really applies in Belize. Our trip down south on the Hummingbird Highway was full of “oh, that’s my friend so-and-so” and “oh look, I met her in college!” We made a pit-stop for food, and there was a friend helping serve food! In fact, even before we got into our rental car (from the super nice folks at Crystal Auto), our travel companion Nana was surprised to find out she would be reconnecting with someone she’d met in MY home village back in the 1980’s! Oh yes, our road trip was destined to be one of memories: both old and new.

We may move away, stay away, or run away, but our backgrounds remain with us no matter how far we are. This is the story of my aunt Aurora Garcia-Saqui, an entrepreneurial Yucatec Maya woman who married into a Mopan life, and has managed to artfully balance both cultures into one successful, happy life! 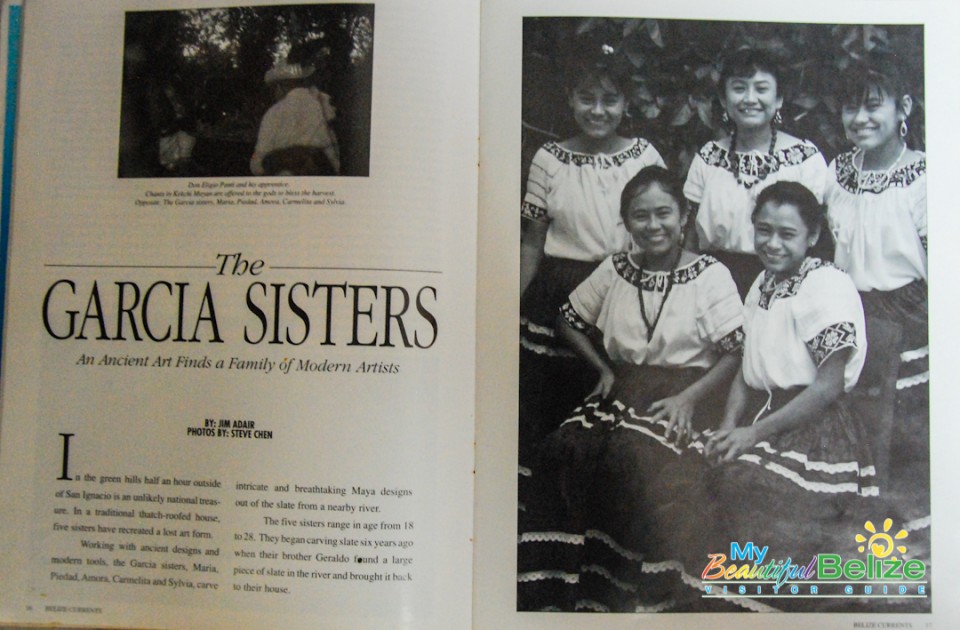 Many years ago, five sisters lived in a small village called San Antonio in the Cayo District. Surrounded by mountains, forest and wildlife, but still remote from the bustle of the main town, the Garcia Sisters had discovered something unique and befitting their artistic nature: carving on slate. The soft black rock lent itself to sharp tools, allowing images to be carved into its surface, and soon, there were full images showing up in sharp relief, getting more and more intricate as the girls’ skill manifested. The stones’ edges remained rough, but their smooth façade shone after polishing. Aurora, second-born daughter, soon put her marketing and entrepreneurial skills to use. 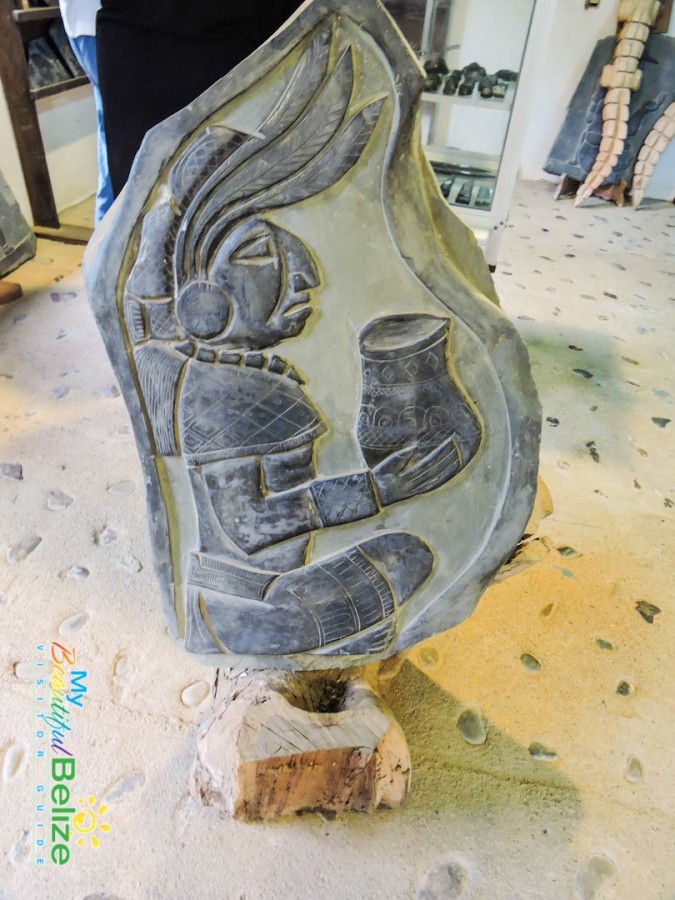 “We had no idea how much people would like our art. We went to the market in town on Saturdays and soon enough, people began buying,” said Aurora. The market she speaks of is considered one of the largest and busiest in Cayo, and sees hundreds of locals and travelers passing through making purchases. “I remember one day we were just about to get up; it was about five in the morning, and we could hear a vehicle pull up, beeping loudly.” It was a van full of tourists who wanted a piece of slate carving for themselves; word had spread. “We had no idea how ideally situated we were. Our little village is in the right spot for visitors to pass through on their way to the Mountain Pine Ridge, and Caracol…” Business began booming, and the Garcia Sisters became legendary within tiny Belize. 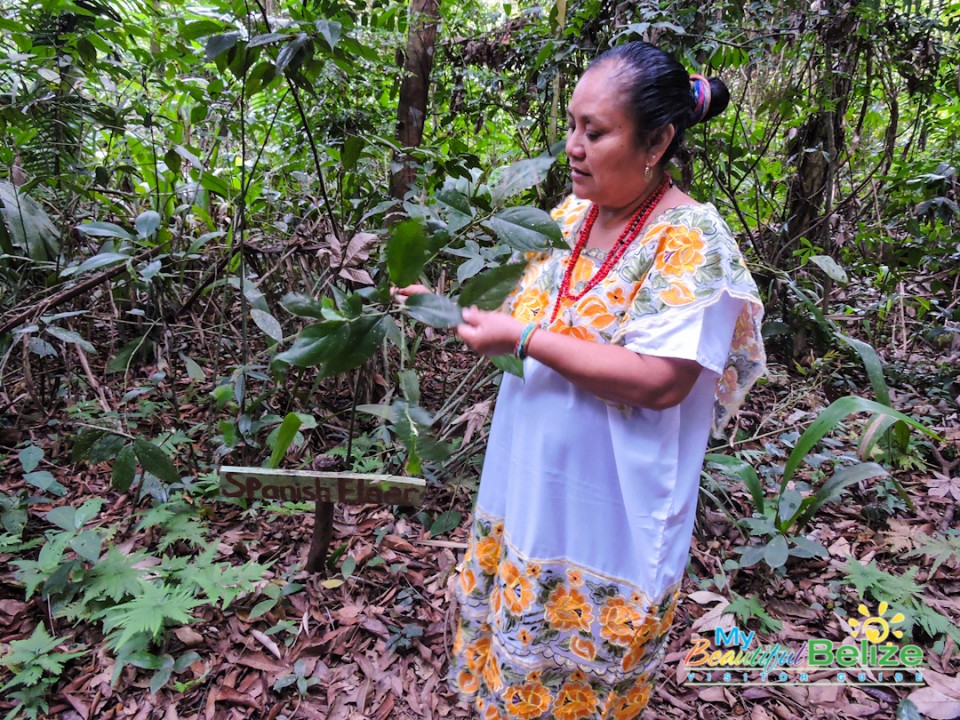 But slate carving was not Aurora’s only forte. Her mother Paulina was an herbal healer, and she utilized the trees and forest surrounding their village to the best of her abilities, taking care of her children’s ailments as they grew up. Also living in the village at the time was legendary healer Don Elijio Panti, a man Aurora refers to as Tio (uncle). “My mother always told us to learn to take care of ourselves.” Along with her sister Maria, Aurora apprenticed with Don Elijio, learning a great deal from the man considered to be one of Belize’s greatest natural healers of the 20th century.

From art to herbal medicine (which is a form of art itself), Aurora had been braced for a lifetime of knowledge. She knew her strengths and developed them as best she could. They all did. When their father dismissed their slate carvings: “Who’s going to buy a piece of stone?!” They marketed themselves nonetheless, and the cash earnings from their sales one day saved his cattle-farming business.

And then, love found its way to her heart. 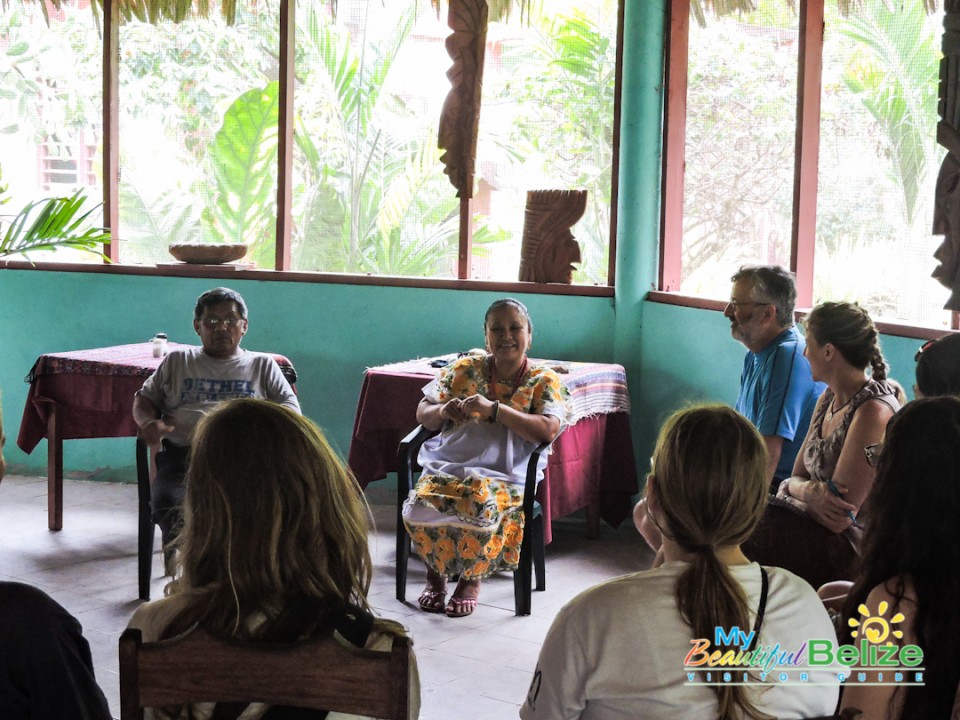 A blushing 24 years old, Aurora met Ernesto Saqui, a Mopan Maya from the southern district of Stann Creek. How could two people from distinctly different cultures make it work? It was not easy, but Ernesto won her over with letters sent over time, and much to her parents’ dismay (especially her father), she chose to leave the comfort of her home and join Ernesto at his home village Maya Centre.
Aurora left the art and familiarity of her village, and made her own way in Maya Centre. Throughout the years, she has become an accomplished businesswoman, running Nuuk Cheil Cottages alongside Ernesto. 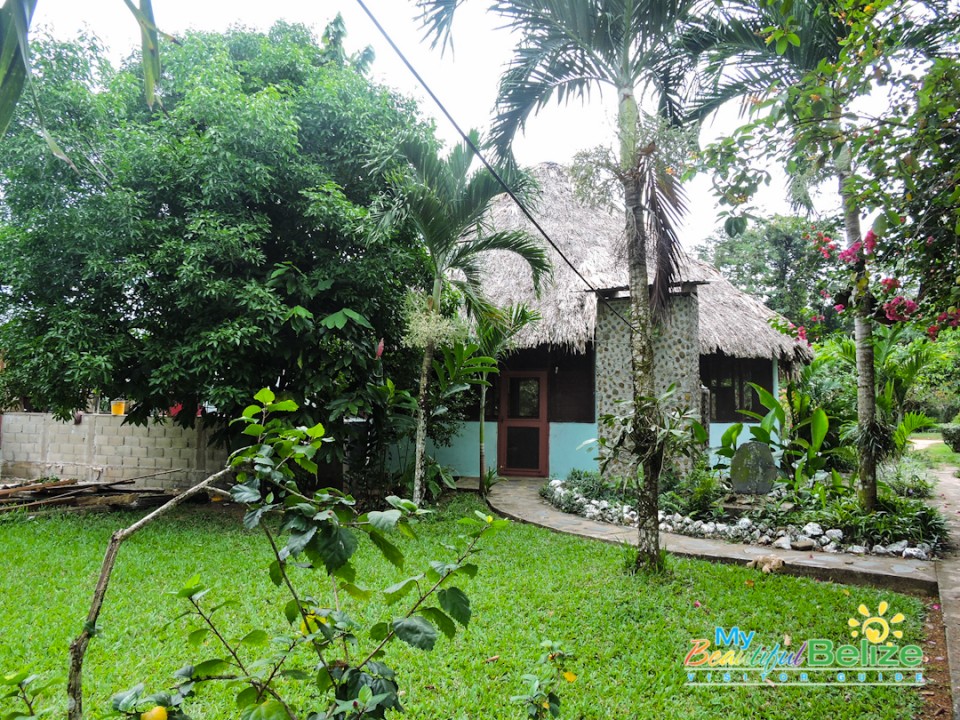 The cottages are nestled just off the main road at the cut-off leading to Cockscomb Basin Jaguar Preserve. The rooms are perfect for visitor’s wishing to explore the preserve over a few days (or even just for a little getaway). Their successful enterprise includes a restaurant, gift shop, laundromat, and Aurora’s H’Men Herbal Center/Clinic. 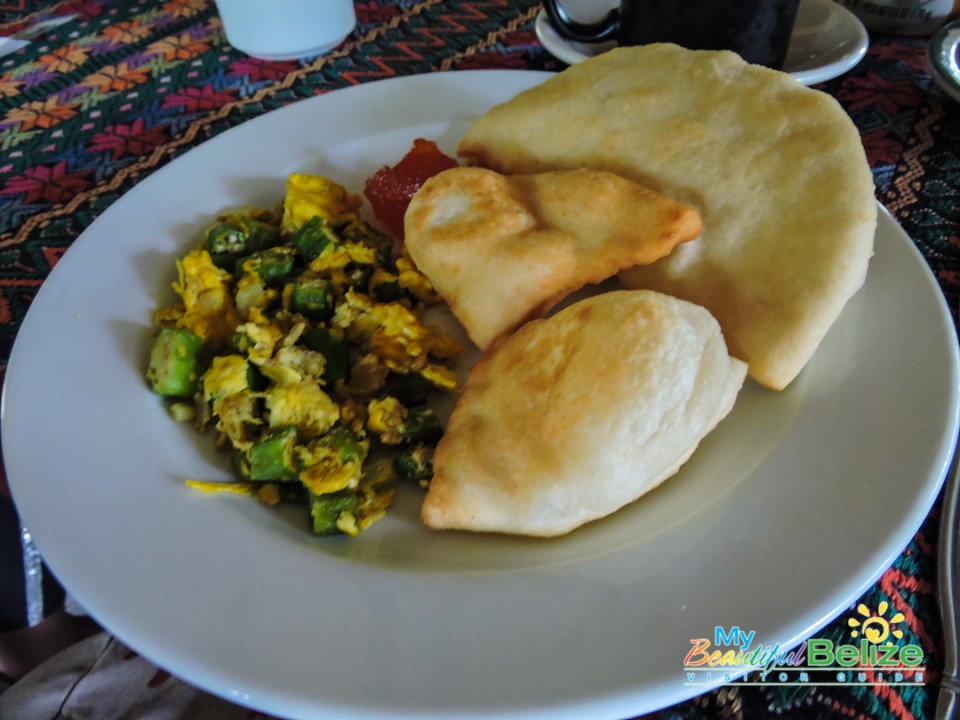 Her combination of Mopan and Yucatec Maya cooking is so unique that she worked on Uj Janal Aj Maya, a cookbook detailing delicious recipes for those wanting to recreate the meals served at the restaurant. 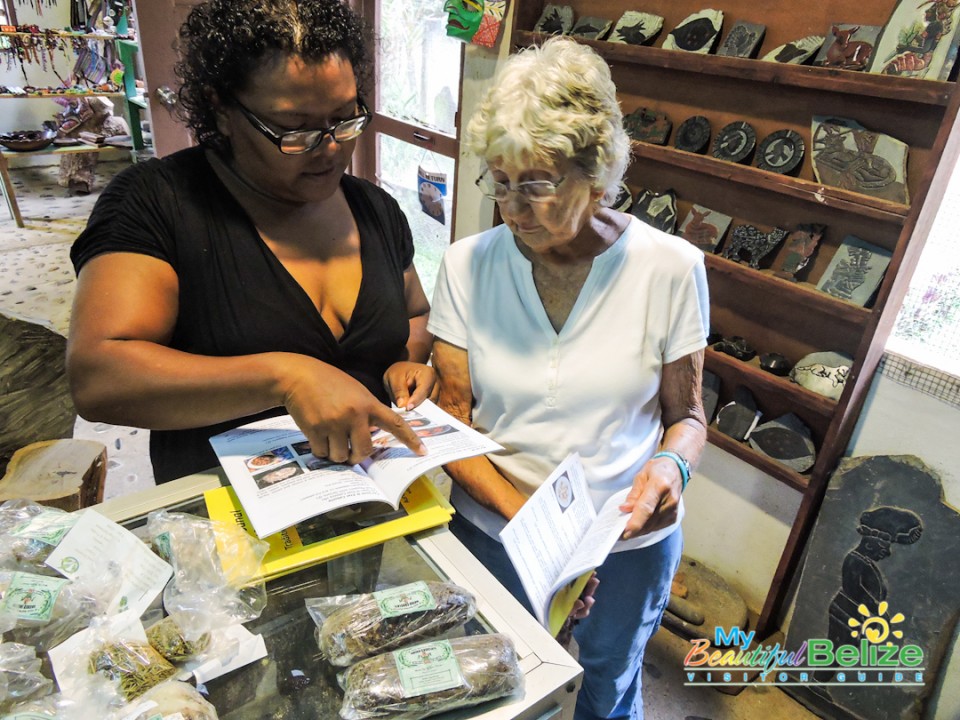 I show Nana my favorite recipe, hopeful that we can try it. We do. 🙂

That is where we met them, a couple comfortable in each other’s presence, surrounded by their business and family: three sons, a daughter-in-law and grandson. According to Nana, Aurora still has the same smile she remembers from three decades ago. The couple and their family welcome us as one of them, and in no time, we’re laughing and chatting away like we’ve known each other all our lives…which it seems, we have! 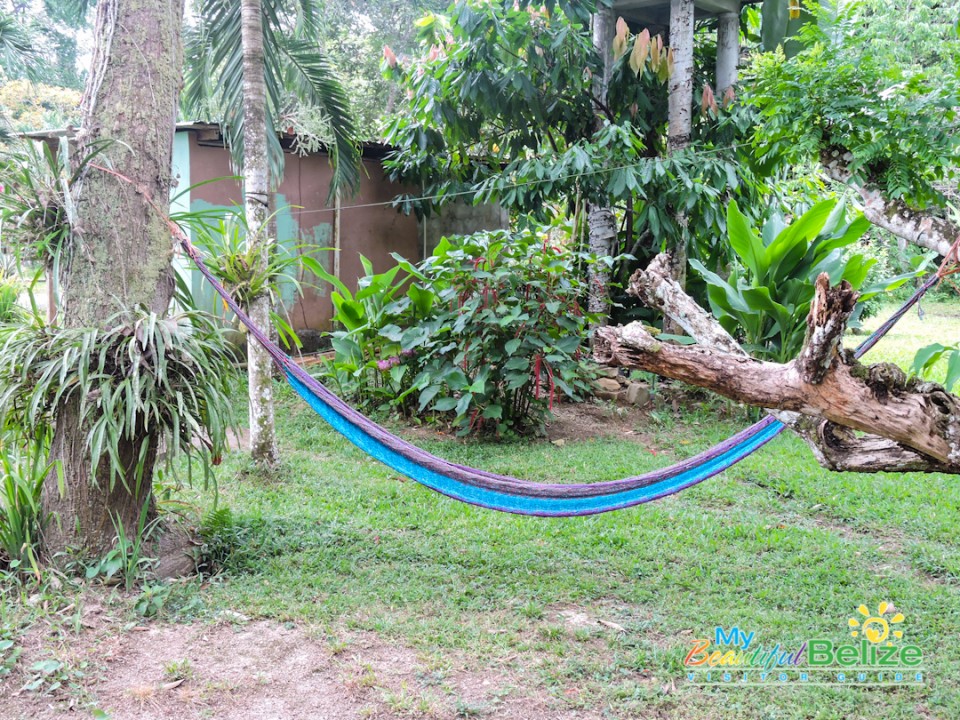 Culture, tradition (old and new), conservation and memories are fabulous topics of discussion at the dinner table. Folklores and stories loaded with meaning are shared, and we feel like we’re back at home. When the time comes for a cleansing ritual at the hands of Aurora the Healer, we’re more than ready. 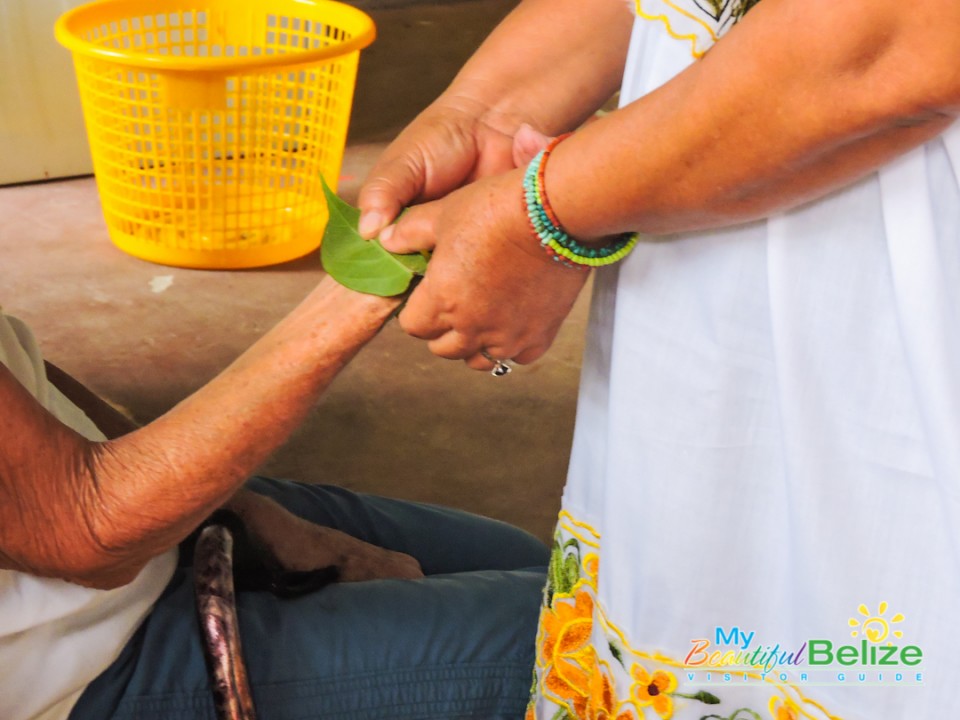 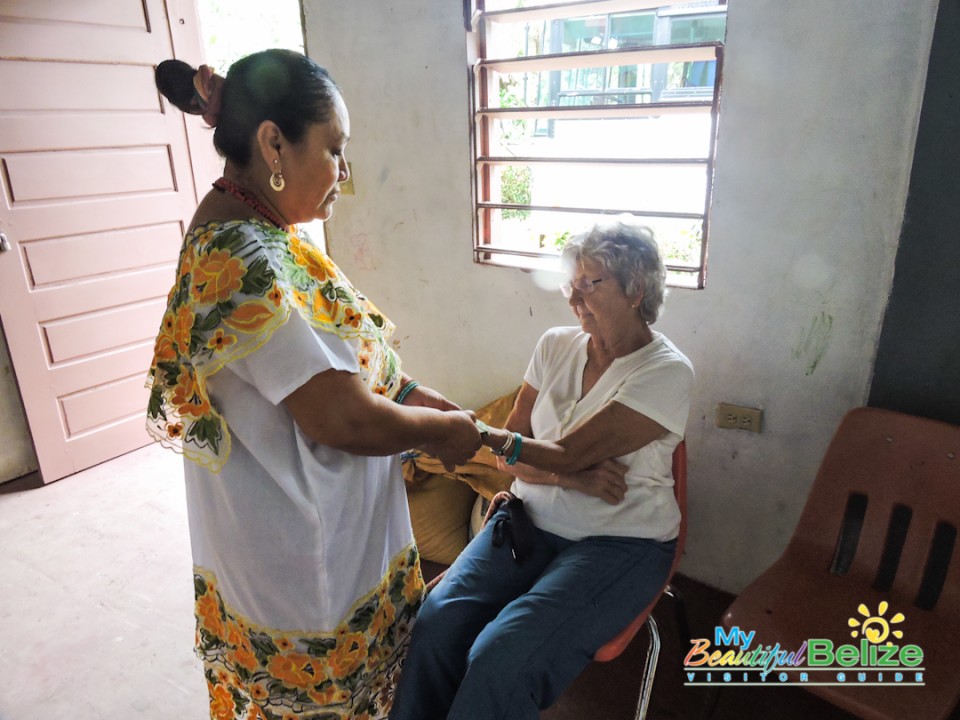 Wet leaves brush all around us as she chants quietly, sending prayers to the requisite deities. After being cleansed, we stand steady as Copal blesses us with fire and smoke. It’s a ritual I’ve never partaken in, but will certainly hold on as a memory for a lifetime. 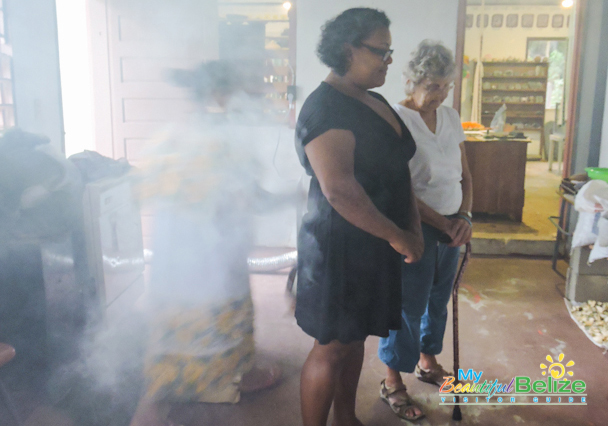 It’s easy to see how Aurora has adapted to her surroundings. Just as she stubbornly kept honing her carvings on slate all those years ago, so she has etched her place amongst the Mopan Maya, surrounded by the jaguars of the Cockscomb Basin, and a family who carries its heritage and culture proudly forth. 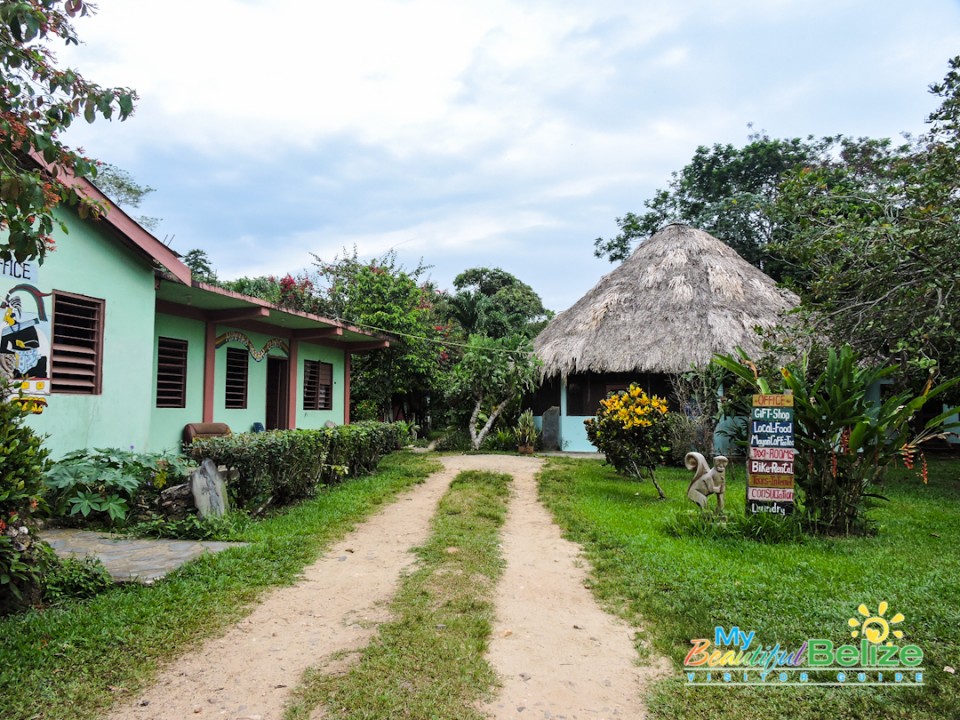