Exploring the country one village at a time!

Written by Mary Gonzalez on September 5, 2014

It started with a phone call. The person on the static-y line stated she was calling from St. Paul’s Bank. Immediately I envisioned myself lounging at the bank of a river somewhere, and the wheels began turning. The phone call ended and I immediately turned to our good friend Google. Where is St. Paul’s Bank? Half an hour down the internet wormhole later, I was deep into the Belize River Valley, learning about the villages along the Belize River that voluntarily make up a sanctuary for howler monkeys. Just look at these names: past Burrell Boom, to Flowers Bank, Maypen, Scotland Halfmoon to Bermudian Landing, Isabella Bank, Lemonal, Double Head Cabbage, Willows Bank and St. Paul’s Bank…wait! Double Head Cabbage?!! Time to alert the boss! 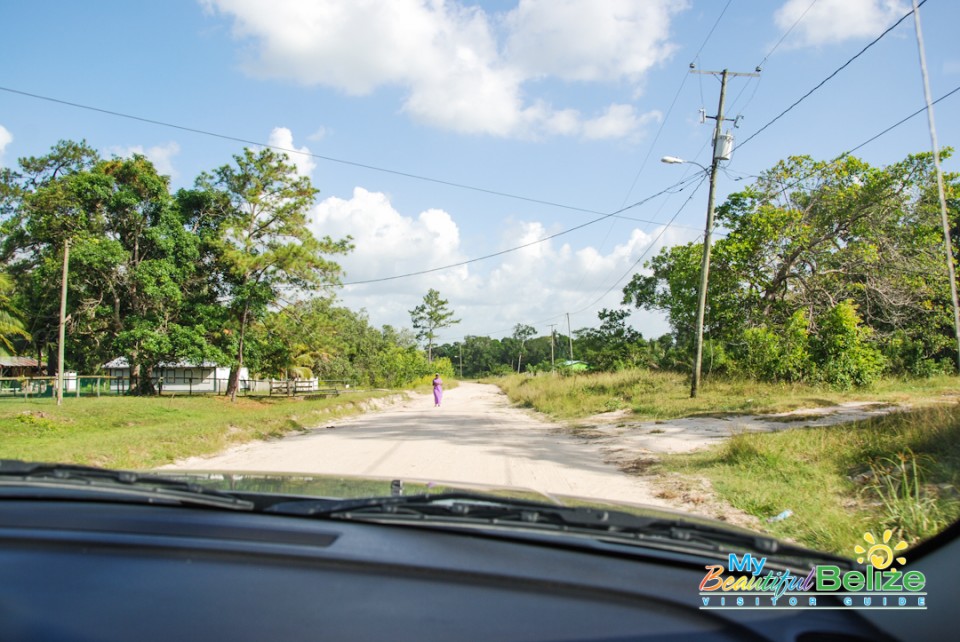 Tamara has been in love with the name of this village since she heard it, and now, here I was, finding a way to go visit it! Excited at the prospect of finally setting foot in Double Head Cabbage, we began planning our first of hopefully many forays into the back roads of Belize. Room? Booked at the Howler Monkey Lodge. Wheels? Crystal Auto Rentals had us covered. 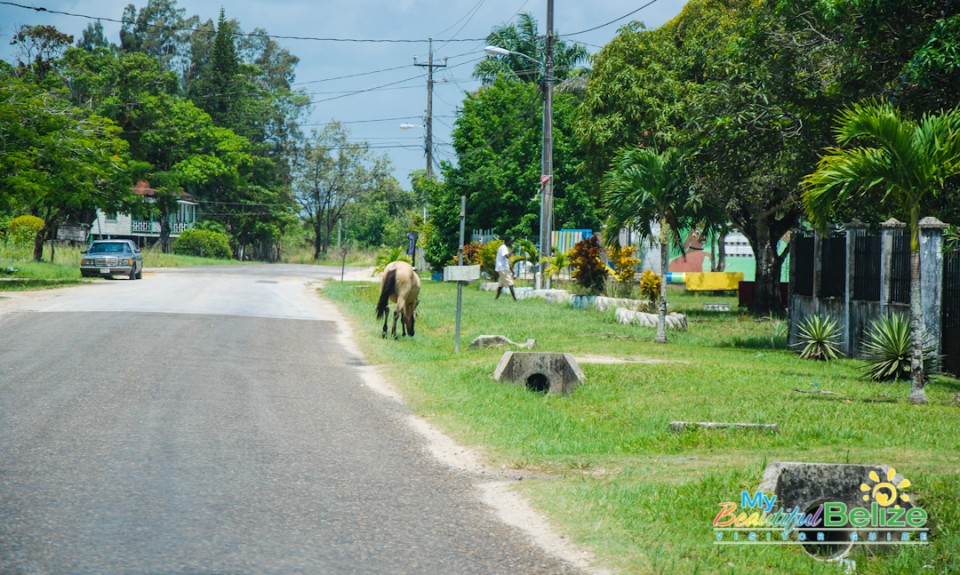 What were we going to do? We had no idea! In our minds, we just had a vague notion that we would somehow stumble upon something fun, maybe involving the howler monkeys at the Community Baboon Sanctuary (aka, the entire region we planned on visiting) and well, we were open to the possibilities. Isn’t that what happens sometimes? You throw caution to the wind, prepare for some adventure and just go and see what happens! 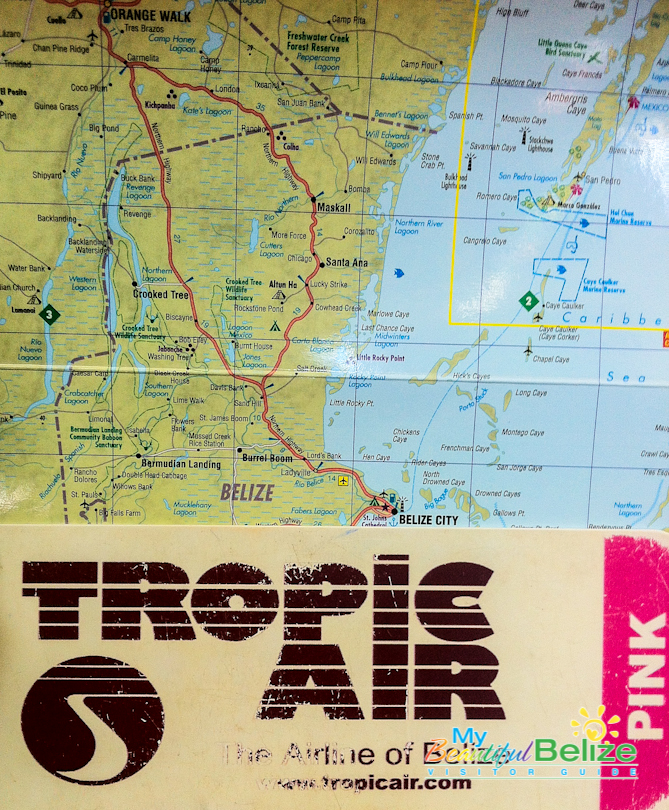 Our detailed map of the Belize District shed some light as to the area we’d be in, and closer inspection at the Tropic Air departure lounge at the Municipal Airstrip confirmed our expectations. Keys in hand, fabulous vehicle to hit the road with, we turned to the Northern Highway. 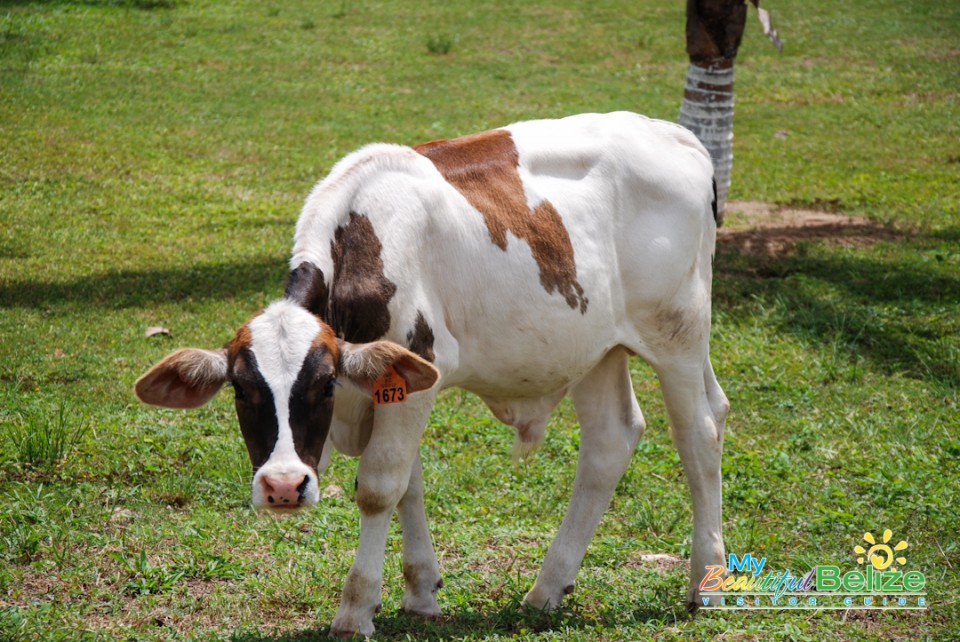 Tamara hands me the map and begins the drive. “So we’re headed up to Burrell Boom, and should see a side entrance that will take us into the Belize River Valley.”
“But I am horrible at reading maps and navigating!!”
“Well, what do the instructions from the resort say?”
“Four miles past Ladyville, turn left before the police check point towards Burrell Boom village, turn right immediately after the bridge…continue straight through Burrell Boom, Scotland Halfmoon to Bermudian Landing…that’s like 10 miles…look for the Howler Monkey Resort sign on the left…”
“Hmmm…what highway are we on?”
“Northern Highway…”
“But this turn is the Western Highway…”
“No it’s not…This one that we just came off of is the Northern Highway…I don’t know what this nice paved diversion is called, but it’s not the Western…”
“I absolutely bet you it’s the Western!”
“Whatever T, if you say so…” 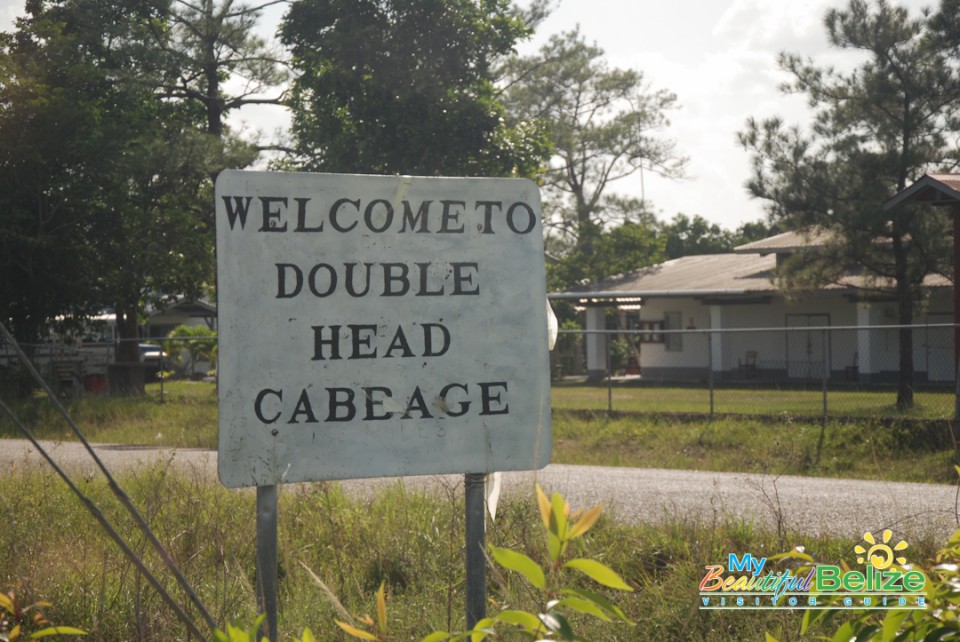 The car turns, with two semi-lost bickering islanders inside, hopefully heading in the right direction. Yay, adventure…
After some silence, and much thought, I voiced a fear. “You realize that when you get to Double Head Cabbage, there really won’t be gardens overflowing with double-headed cabbages out front right?”
“Maybe they’ll have a sale, and they’ll be going two-for-one…” We hooted with laughter and began a silly guessing game.

How many of you truly know the reason for the names of these villages? There’s another village by the name of Black Man Eddy, and we’ve often wondered if it is literal, but Double-head Cabbage? Silliness aside, we were excited to finally get to know the places we were headed to, and when we crossed a bridge and saw a sign for Scotland Half Moon, we could almost hear the monkeys howling. 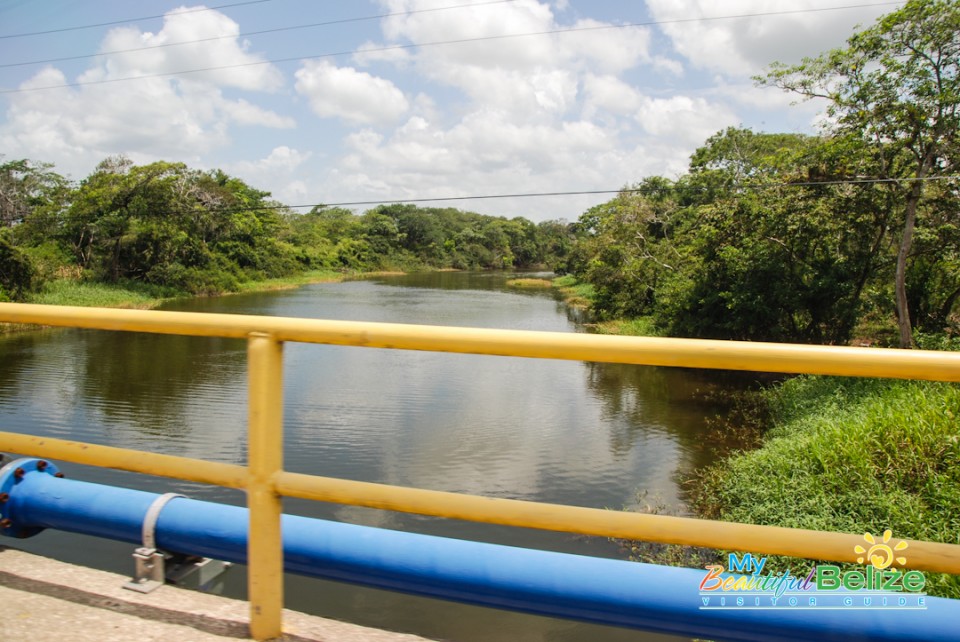 After our roundabout way of finding Howler Monkey Resort, unpacking and snacking, we headed out to the Community Baboon Sanctuary headquarters. The sight of the howlers hanging around from our hotel’s verandah had us eager to check them out even closer! But first – some education.

Our guide for the day was Robert, and he was eager to share stories about the sanctuary, confirming once again that when a community comes together to work for the betterment of all, great things can happen. We learned about birds – his passion for bird identification and their nesting habits was clear from the get-go, and we even got a little golden shower from the bats that were overhead! But the real knowledge came when we glanced at a poster that explained the origins of the various villages’ names. 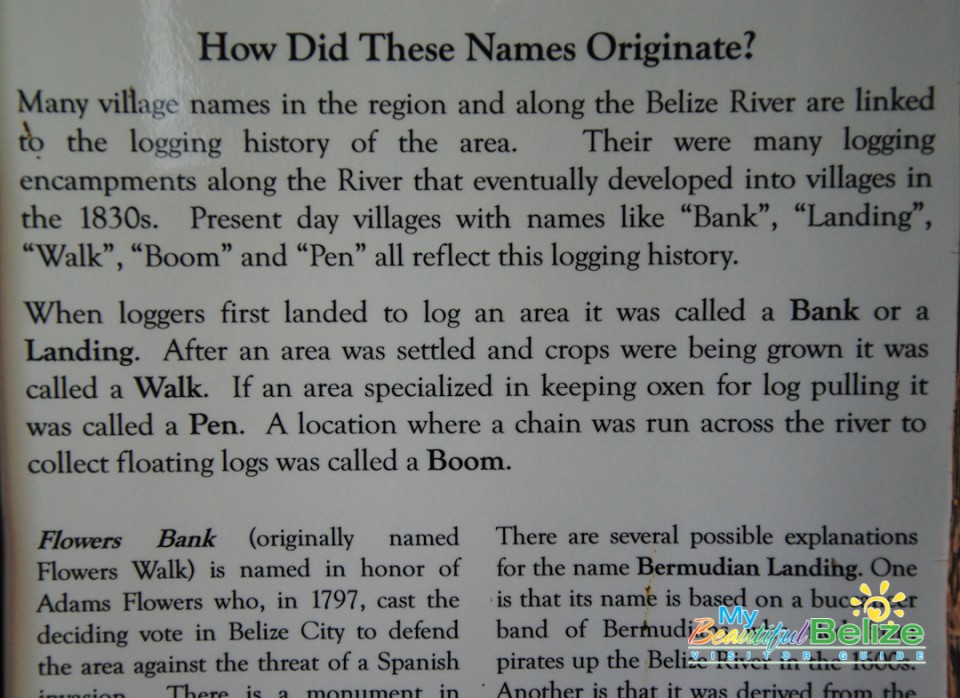 Aha! Here, we would finally discover why “Double-Head Cabbage”! And…well, it’s certainly not what we were thinking. In fact, never in a million years would we have thought it, and even this Belizean didn’t get the ‘Belizean-ism” of the name. It was so obvious, yet I completely missed it! 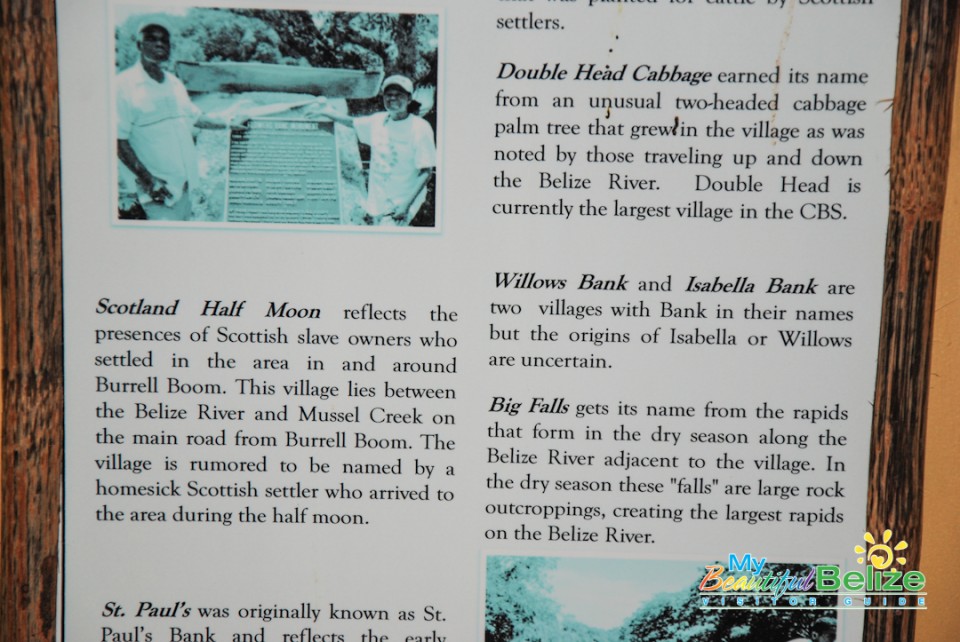 Apparently they no longer exist, but at one point, there were double headed cabbage palm trees growing prolifically in the area. Yep…palm trees. Double-headed CABBAGE PALM TREES! If you’re in the southern region of Belize, you’ll hear of a special dish called ‘cohune cabbage’, which is made from the heart of a specific sort of palm tree called cabbage palm. Well, the earliest settlers in the area known as Double-head Cabbage saw these palms and opted to call the location that. No crunchy round vegetables growing in the garden, no two-for-one deals. Not even the palm trees in existence, just a funny story about the expectations behind a name. We even learned of the definitions of Landing and of Boom, and were still left wondering where Black Man Eddy got its name…hmmm. 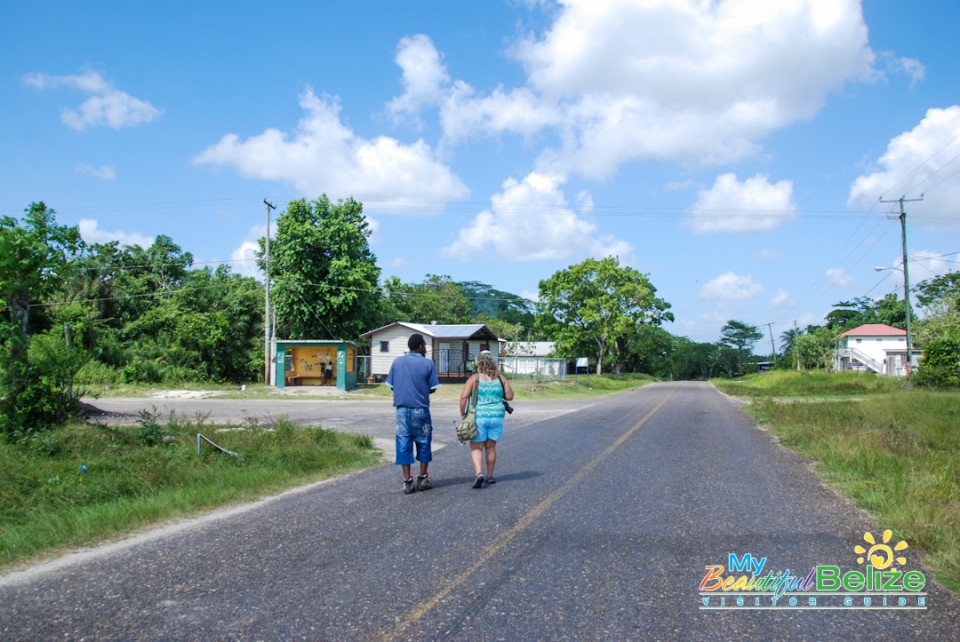 We made Robert laugh loudly when we told him about our village name expectations. Feeling sorry for us, he offered to take us on a mini-village tour so we could see the places we’d been anticipating. But first, we were off to the sanctuary to try and locate some howlers! 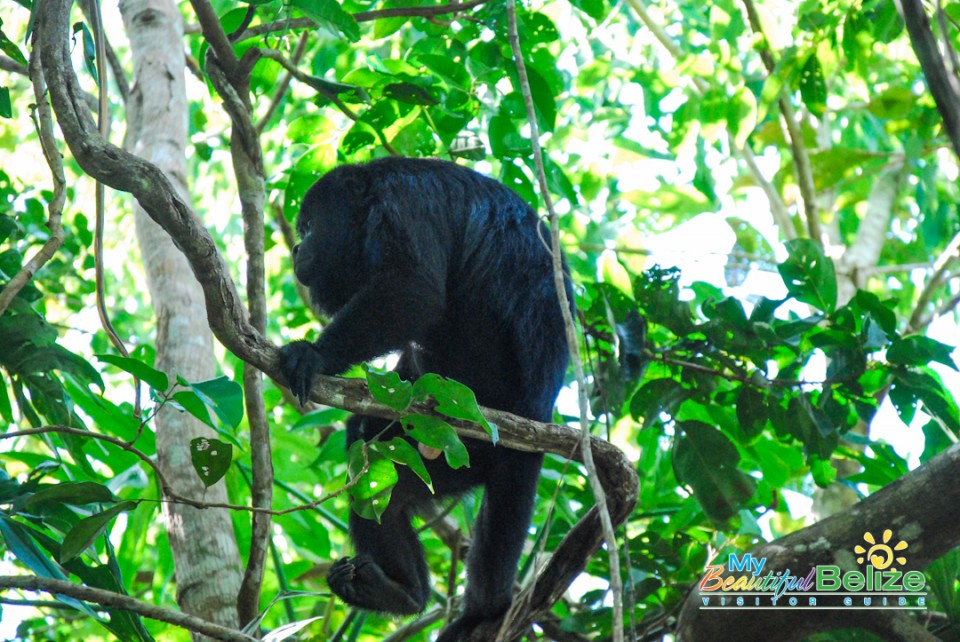 Robert explained that sometimes the howlers stay in hiding, or are too shy to step out for a full view. I don’t blame them: it’s hot, they are probably sleepy, and then weird two-legged creatures point funny looking things at them and a flash goes off. I’d hide too. But off we marched to the trail, hoping to catch a glimpse, or perhaps hear their howls. Along the way, Robert points out some medicinal plants, including one that is used as a pregnancy test. Yup – a pregnancy test. I listened to his talk, and was reminded that while we rely on our clinics and doctors to prescribe medications to us, in some remote areas, the practice of bush medicine is very much alive. Images of my grandmother pounding some thick leaves to place on our hot foreheads during a fever, baths in green sludgy water, picking leaves from our hair afterwards, and drinking boiled herbs and bark to clean out our system – oh yes, the village life is still very much alive and I, for one, am thankful. 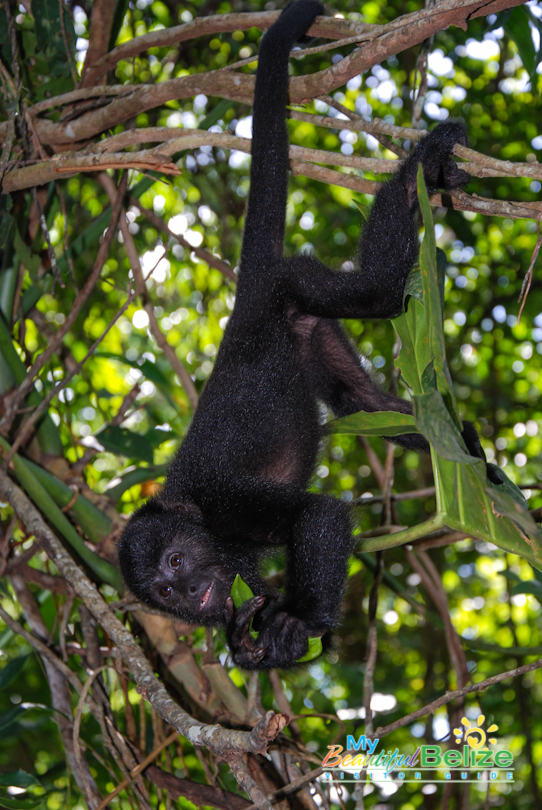 Our medicinal lesson complete, we continued in the trail, where a rustling overhead caught our attention. Robert was all smiles as he looked up, and pointing excitedly, he showed us not one, but three howlers peering down at us. It was a big male, a female and a tiny baby monkey with the cutest face. Of course, we did the obvious and pointed our cameras and clicked away as the baby and female swung from vines and the male howled from his perch up high. Another joined in shortly after, and soon the canopy overhead was rustling with curious swinging monkeys. 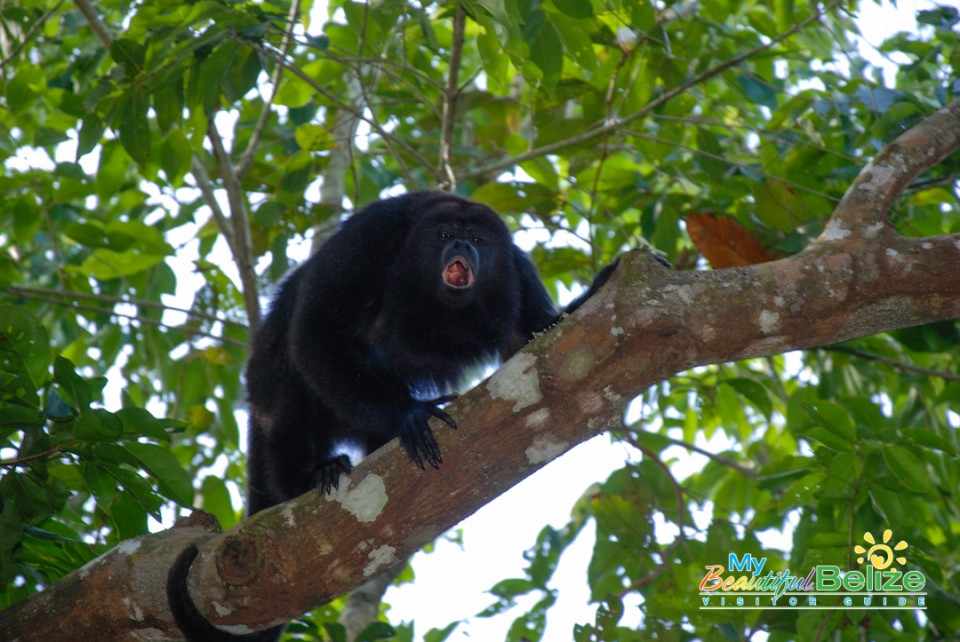 Yet another lucky strike for us, and our excitement was contagious. Robert attempted howling as well, joining in with the big male for a few good lung-clearers. We don’t think he realized how insignificant his howls were compared to that big ole monkey! 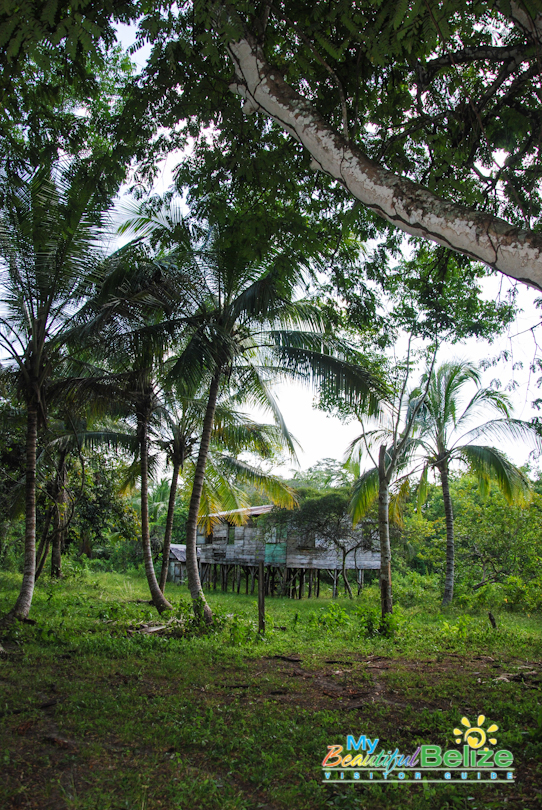 Thrilled that we’d accomplished what some don’t on their first try, we decide to take up Robert on his offer to visit the remaining villages at the sanctuary. Some places were merely a few homes spread across swaths of land, and one was even abandoned! Overgrowth and giant trees shadowed a small abandoned building, while a few yards ahead, another crumbled in disrepair. As we turned away from that place, we passed through Double Head Cabbage, and had to make sure to stop and take in the views. We saw the bank where paddlers in the annual Ruta Maya Challenge take a break during a grueling race, and we also quickly learned NOT to step onto a cricket field! 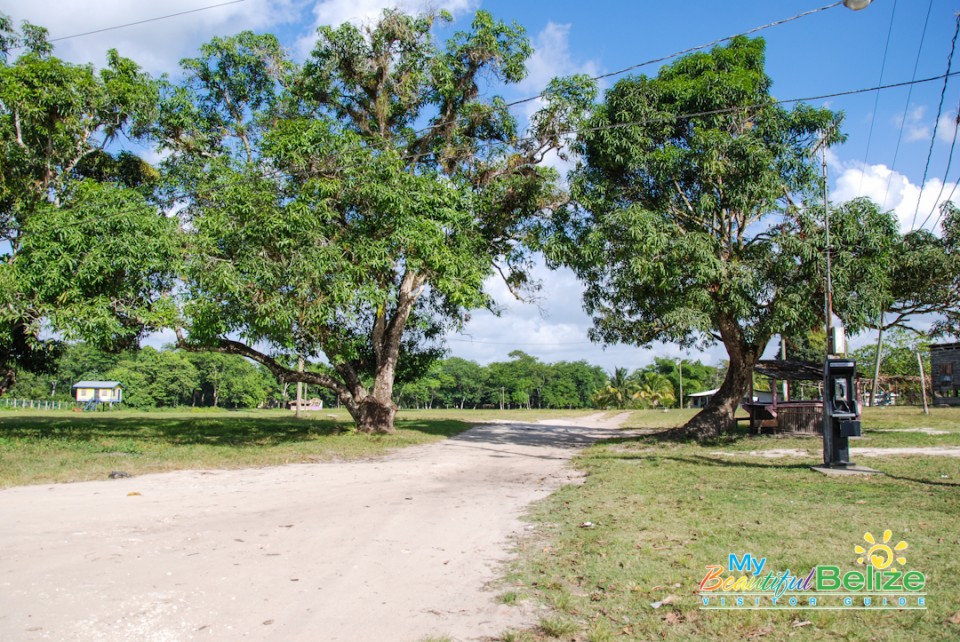 By the time we made it back to Bermudian Landing (named after Bermudian grass) and to our resort, we’d quickly fallen into the village life vibe. That hammock called to us, the breeze was tempting and the beers were cold enough. There was nothing to do but relax and take in the sounds of a dwindling evening, maybe a quick dip in the pool to refresh after an evening of heat and trekking. When the night blanketed us, the stars shone brighter than ever, and a huge silvery moon lit our way. Long past dinner, and long after our chatter had subsided to simply a few words here and there, we could only reflect on what a serendipitous day we’d had. We were happy to have found out more about these settlements, and excited to have crossed off a few unique villages in our Backroads Belize list. (Black Man Eddy, here we come next!)