First of all, I’d like to make abundantly clear that this recipe/method I applied to making this treat would make my ancestors roll in their grave. It is NOT your grandmother’s painstaking, grow-reap-prepare-feed type recipe. It ain’t organic; I do not have a fogon/fire hearth and my pans are not crusted with the black marks of a coal fire…Living on an island makes me have to compromise. And you know what? Compromise is a good thing when it can yield tasty things! That out of the way, let’s move on to one of my favorite things in the world!!

My favorite memories of my mother involve LOTS of dessert. That woman loved to make sweet treats, and I can almost smell the sugar melting into deep caramel puddles, sweet dough rising before being fried, cakes fluffing up light and spongy, and coconut flakes simmering in a sugar bath. I can hear her instructions clearly as my cousins would be bringing down coconuts: ‘Not that one; it’s too green! No – that one’s too old! It has to be JUST turning…that one! Now find ten like that if you want an empanada!” 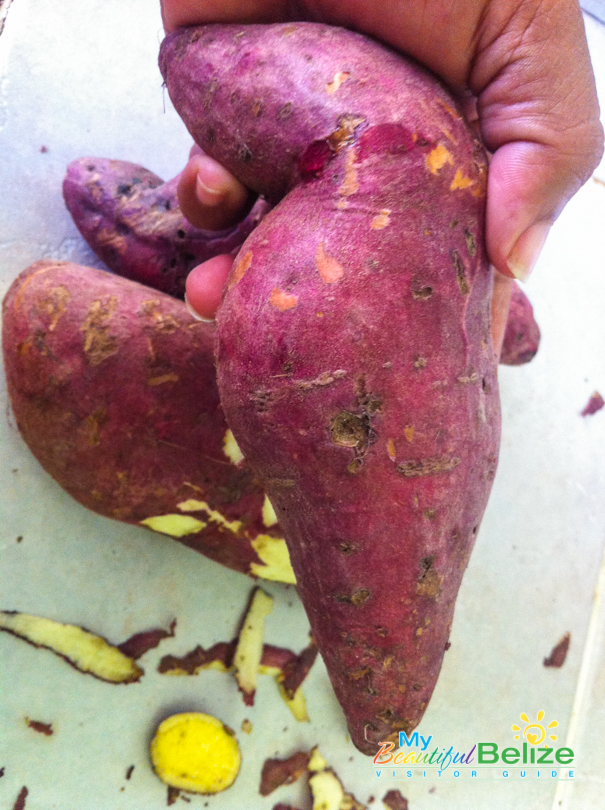 When my father would show up from the milpa with a bounty of sweet potatoes, her eyes would light up. My mouth would water, because I knew what was coming: Potato Pound! The concept is simple: grated sweet potatoes, copious amounts of sugar, butter, fresh grated ginger, some coconut milk. All would combine in a large pan lined with banana leaves, then placed on barely flaming coals on the fire hearth, covered and topped with more coals to roast the top. Inside, magic happens as the sugar and starches combine to create a gorgeous pudding.

So, back to those daydreams of eating some of the best Sweet Potato Pound (pudding) from my mom’s fogon. What is a girl on the island to do when she just has pre-packaged coconut milk, one tiny handheld grater and the fresh produce for a tasty pudding? Why she tries her luck at making that pudding she dreams of so often! 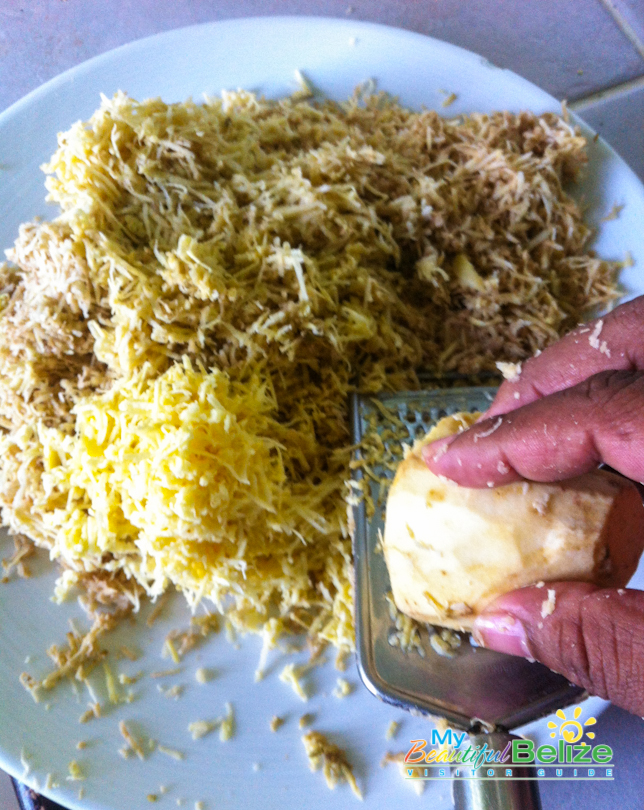 I huffed and puffed as I grated each potato, one by one. Its consistency is not even close to a pudding, so I know it has to be blended. (I should really buy a box grater…any tips to keep it from rusting?!) 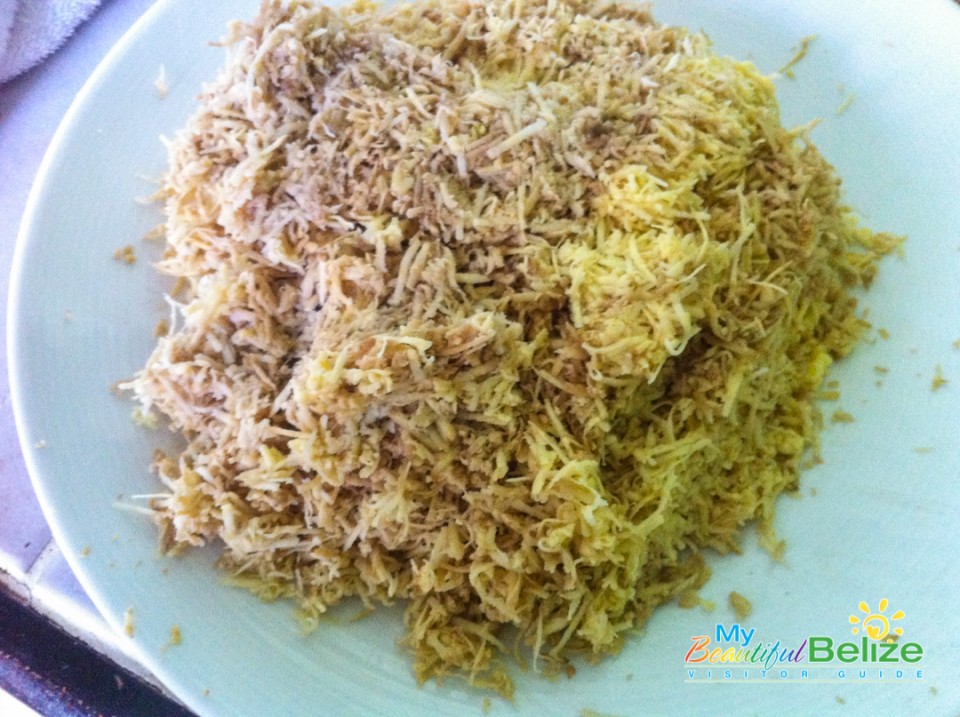 After what feels like hours, there’s a huge mound of potatoes with the ginger all mixed in to create a lovely, earthy, gingery smell. I throw a couple handfuls of the mix in my high-powered blender, adding a splash of coconut milk to ensure it blends. When it forms a more gooey consistency, I take it out and repeat the process till all my potatoes have been blended.

To this pudding mixture, I add brown sugar and the softened butter. Much like my mother, I go by taste. I like my pudding to be sweet, but not overwhelmingly so. I like to taste the bite of ginger and enjoy the potatoes’ earthy sweetness. So, as I mix, I taste till I hit that perfect sugar ratio. 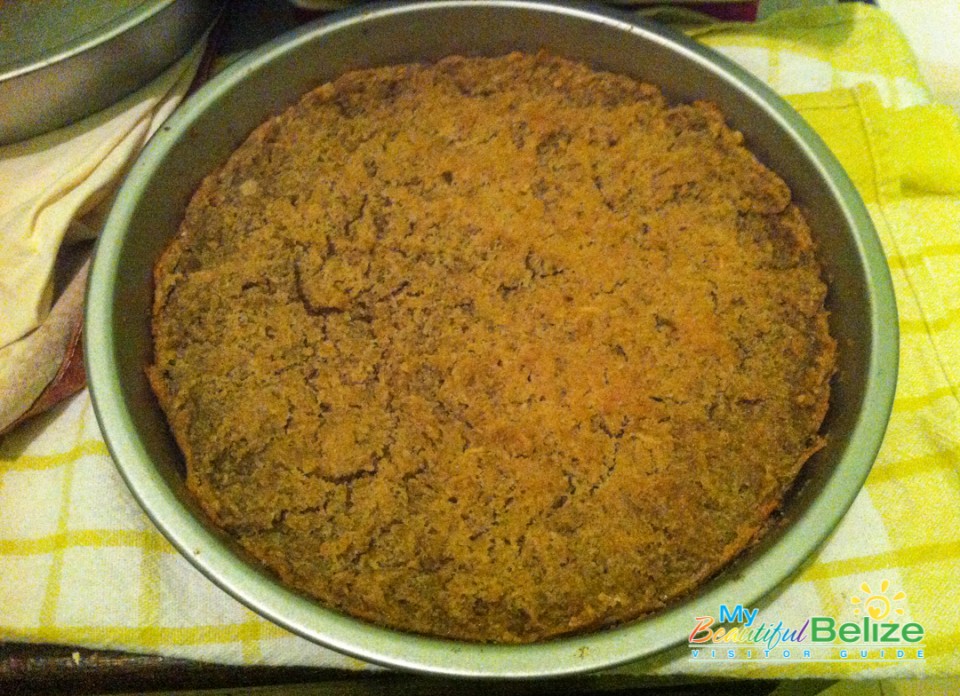 I would say the cooking time for these needs to be shortened, as the tops were drier than anticipated. But it was still crispy and oh-so-good, so, I am not complaining!

Baking pans (non-stick) are greased (no banana leaves for this venture), then the mix is poured into them. My mother would often make one large baking pan full, about 3 inches thick. But I am impatient, and my pans are tiny, so I pour to about a one-inch thickness, already anticipating a shortened baking (and cooling) time! (The sooner to dig in!)

With the oven on high, I stick the three 9-inch pans and let them work their magic. My tiny kitchen is overwhelmed with spicy scents in no time at all, and after half an hour, they’re ready to broil for a quick few minutes.

After a quick cool down, the pudding is ready, and this girl ate an entire pan all by herself. (Do. Not. Judge… 😉 ) 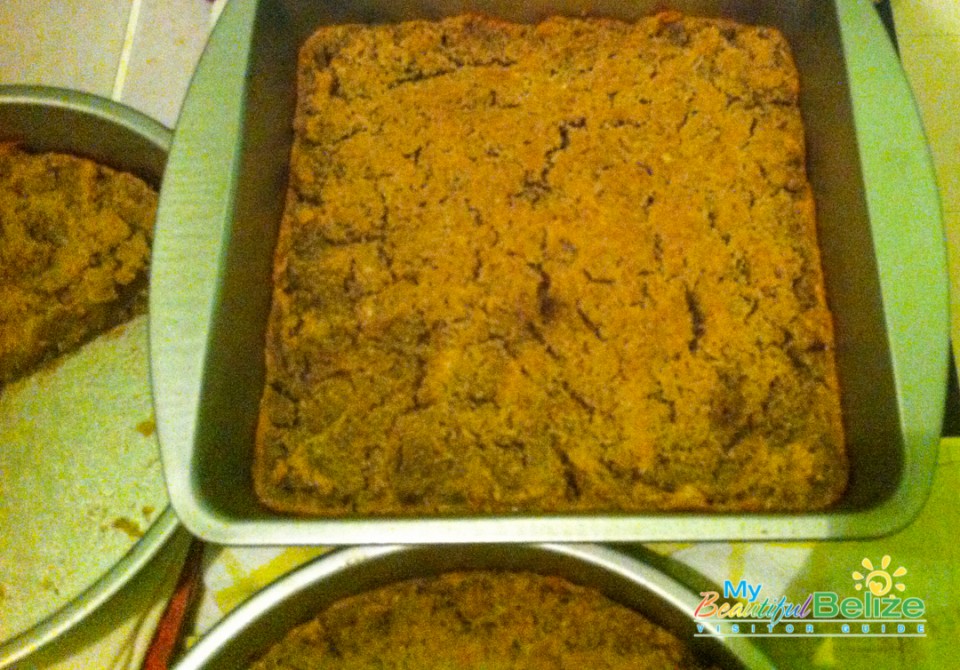 Yep…if you look to the far left, I’d already eaten half of the dessert! I have no self-control with these kinds of treats!

So, sure it’s not the traditional Sweet Potato Pound. But it has its roots in my mother’s kitchen, and was re-created solely from memory. I’ll take that any day! Someday when I have my own fire hearth, I’m sure I’ll prepare a proper, thick, rich pudding; but until then, this will do. 🙂