Written by Tamara Sniffin on November 4, 2019

As someone originally from North America, a common critter found in most yards and a raider of bird feeders are squirrels. Years ago, these bushy-tailed rodents were hunted for food, something I am not sure is still in practice. I don’t recall anyone raving about the delicious wild squirrel on the menu! 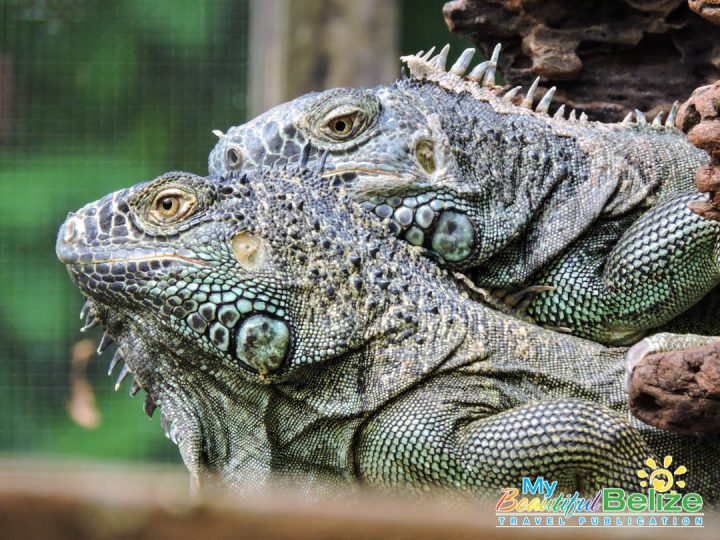 In Belize, I liken the iguana to our cute but pesky squirrel. Beauty is in the eye of the beholder, and yes, I think iguanas are cute, even when they eat my flowers! And similarly, they have been and still are hunted and consumed by indigenous populations and remain a part of our cultural cuisine. Considered a delicacy, especially the developing eggs the female carries in March and April, the hunting season for iguanas is closed from February to June of each year as this is their breeding season. With poaching and over-hunting of the popular ‘Bamboo Chicken’, paired with the destruction of their natural habitat as development destroys their nesting sites, the green iguana is facing grave population loss in some areas. 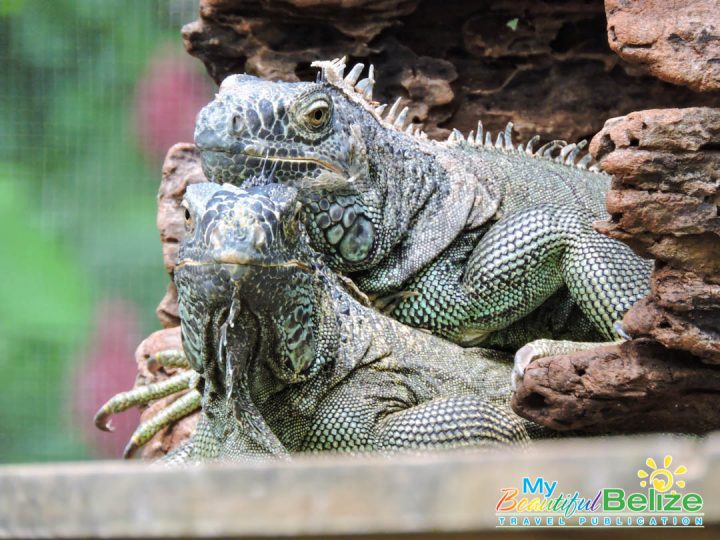 In response to these growing concerns, The Green Iguana Conservation Project was founded San Ignacio in the Cayo District in 1996 by Mrs. Mariam Roberson and Daniel Velasquez, to protect the species while educating individuals about these reptiles. In collaboration with Belizean primary and secondary schools, Galen University, and foreign affiliates, the Iguana Project is entirely self-sustained and offers a great field of research and education to the people of Belize and around the world by allowing individuals to interact with the green iguanas. 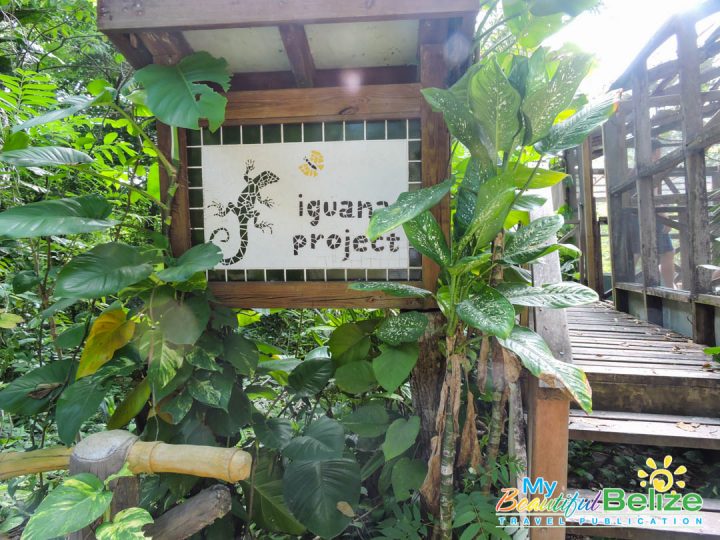 The Green Iguana Conservation Project interpretive site is located within the San Ignacio Resort Hotel’s property so that visitors learn how vital the reptiles are to the balance of the nearby river habitat. On a recent tour, our guide Oscar explained the process behind curating, nurturing, and eventually releasing these modern-day dinosaurs. 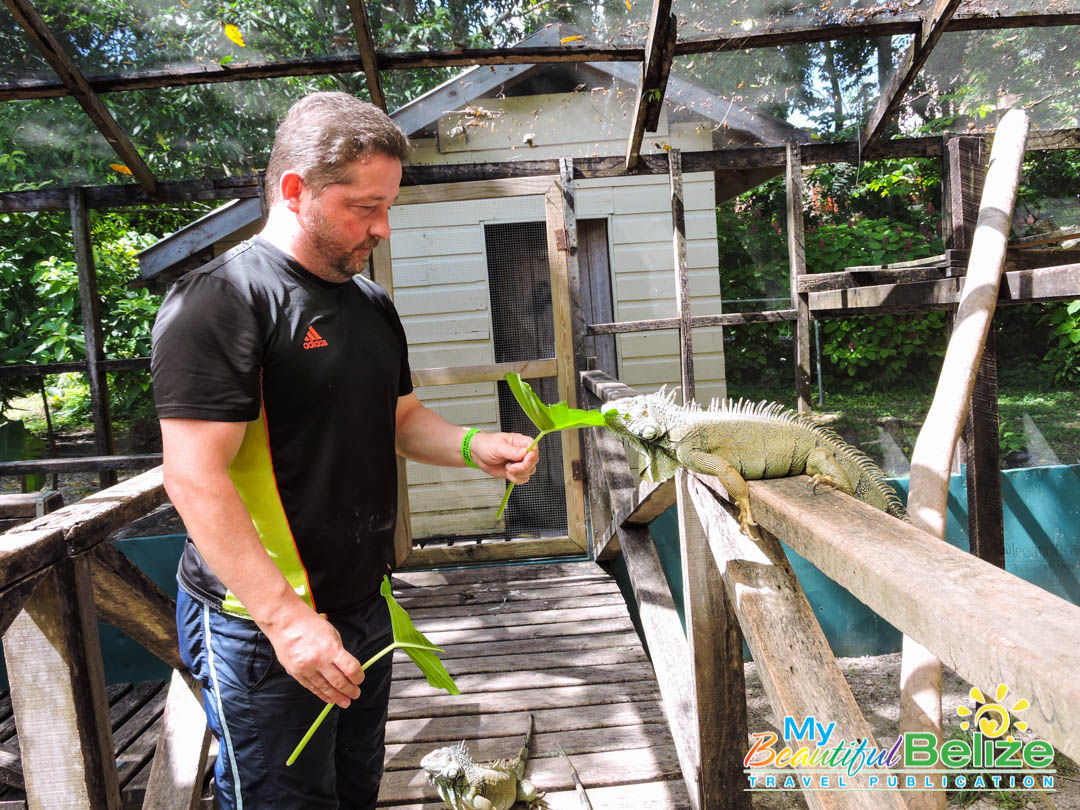 They begin by collecting iguana eggs, which they lay during March, April, and May. The females bury their eggs close to each other in sandy tunnels near the river, so when you find one clutch, chances are more are nearby. The eggs are collected and incubated for three months. It was super interesting to learn that the temperature the eggs are incubated at determine their sex. Warmer temperatures produce males, while cooler temps produce females. The Project incubates the collected eggs at a lower temperature to produce nothing but females. This ensures a lot more babies when the females are released into the wild area they were once collected from as eggs two years earlier. It is a continuous process of rearing the iguanas from the egg to the juvenile stage and later setting them free into their natural habitat. In the first years of laying, the females produce around 20-30 eggs, but as they mature, one female can lay between 40-80 eggs. 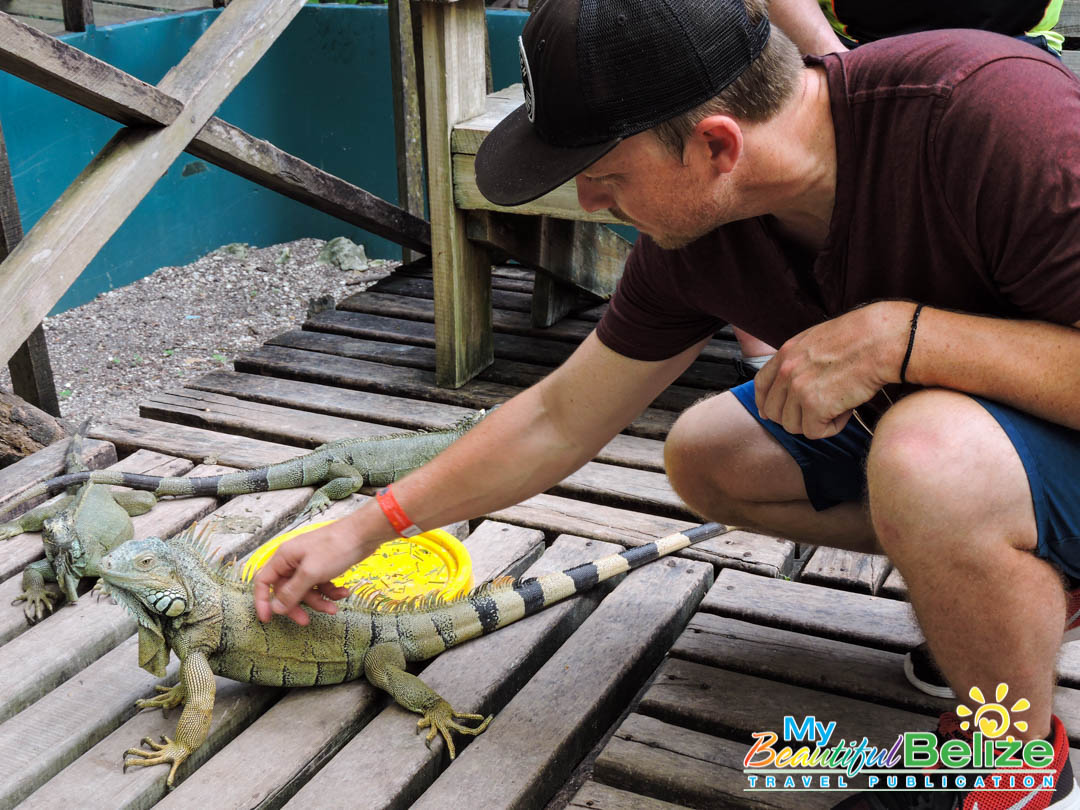 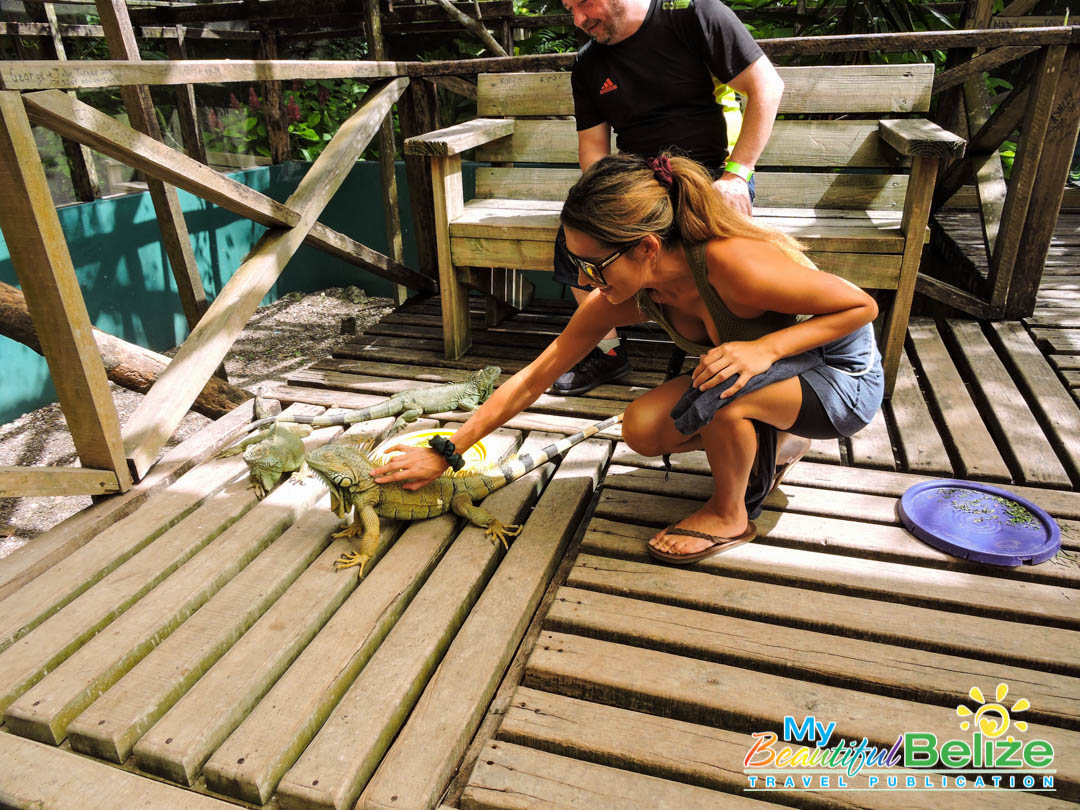 The babies are raised separately from an enclosure where mature iguanas’ adults linger. Some of these adults are being rehabilitated for wild release while others, for one reason or another, will remain in captivity for the rest of their lives. Here we get to mingle with the iguanas while Oscar provides us with some leaves to hand-feed them. They beg for more, and we even get to pet them, which is a weird, scaly, bumpy feeling. It’s not like scratching your dog’s ears, but the iguanas seem to enjoy the experience! 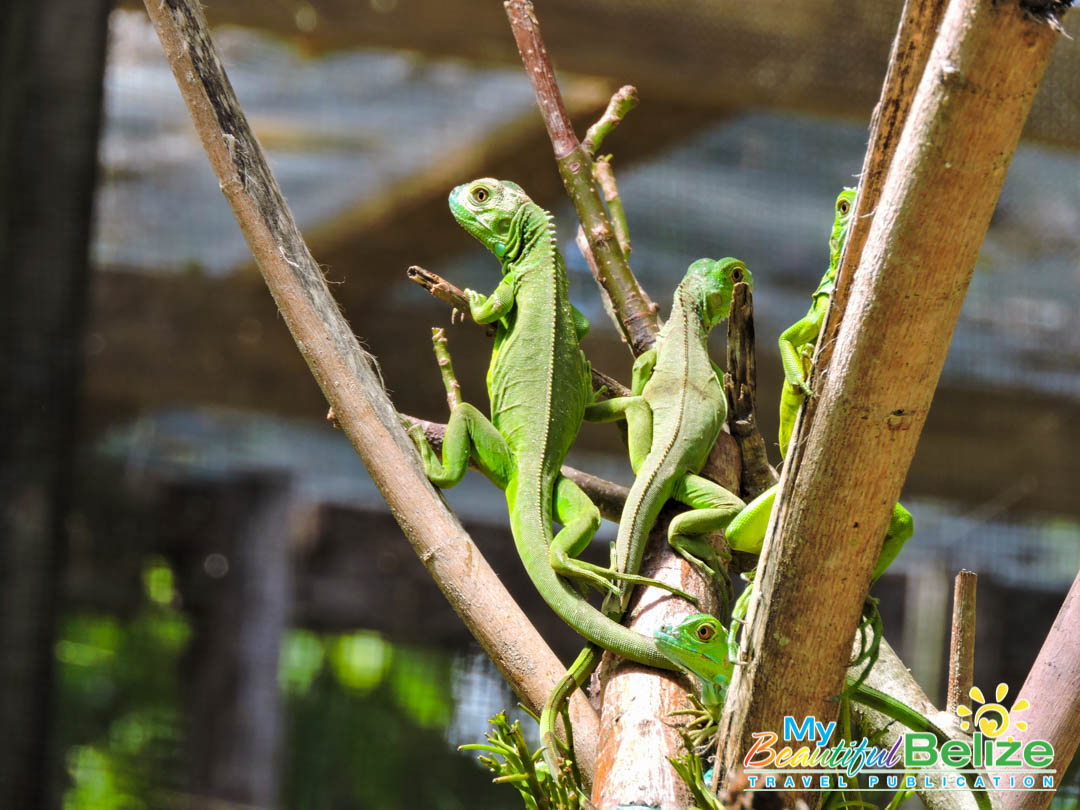 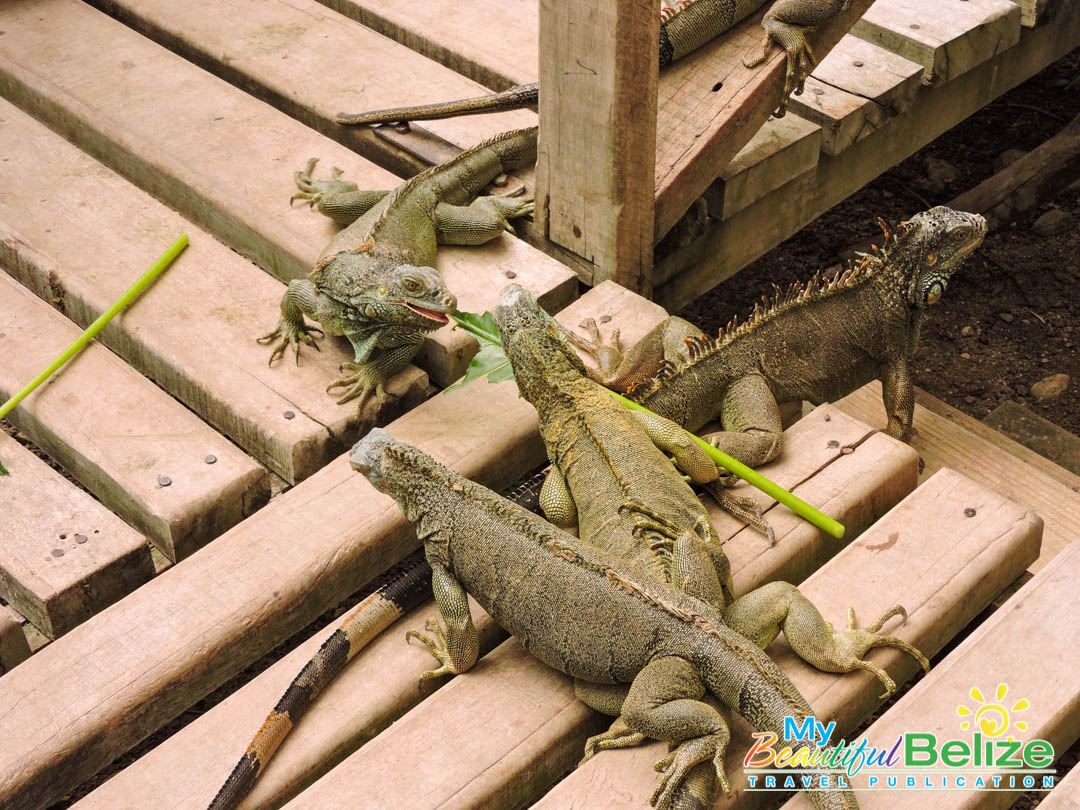 The Green Iguana Conservation Project is a continuous effort that aims to conserve and look after the endangered green iguana species in Belize. Over the years, the Project has become one of the most popular attractions in San Ignacio. The San Ignacio Resort supports the project with fees charged for the tour, donations, and programs such as “Adopt an Iguana.” To learn more, please visit their website at www.sanignaciobelize.com/belize-iguana-project