The Green Iguana is a cool reptile!

What kind of critters do you have in your backyard? Maybe some birds and an occasional squirrel, depending on where you are from? In Belize, we not only have a variety of birds in our yards but a variety of lizards as well. From small chirping geckos to an assortment of anoles, we often catch just a glimpse of these quick little lizards as they dash under foliage, rocks or behind the refrigerator! However, the lizard that reigns supreme in our neck of the woods (or jungle I should say) is the Green Iguana. This amazing reptile plays an important role in Belize’s history and ecology.

First, some background on iguanas: Even though it goes through various color changes during its life, it is technically known as the Green Iguana, with the rather unimaginative scientific name of Iguana iguana. The name iguana itself is said to come from the native Caribbean Taino language, iwana. Here in Belize things are a bit more creative, with Bamboo Chicken, Guana and Garobo for the bigger, more mature males, who take on an orange hue and can grow up to five or six feet from nose to tail tip.

Why Bamboo Chicken, you may ask? The iguana has graced many a Belizean table over the years with its meat and eggs, and is still a welcome part of the national diet in some areas of the country. It has been a part of Belizean tradition to hunt iguanas during the months of March and April, especially the females that are carrying developing eggs that are laid in June. The eggs are considered a delicacy, especially when made into a stew and served with coconut rice. The little bit of meat found on this reptile is also cooked and eaten. And, like most unfamiliar game meat, when people ask what it tastes like, the usual answer is, well… chicken.

Iguanas are now protected under the Belize Wildlife Protection Act and a license is needed to hunt and sell them. The hunting season is closed each year from February 1st through the 30th of June. Juvenile iguanas in Belize are shades of green, and when they mature between two and three years of age, they change from the normal green and dark brown into light shades of orange and the female takes on her fertile camouflage.

Sunlight is essential to these cold-blooded critters, who are always in search of a sunny tree branch. They barely move until warmed up to about 75°F or more. Once energized, they begin hunting, establishing and maintaining territory and, when the time is right, mating. If you happen to see males bobbing their heads up and down vigorously and pushing their dewlaps (a fold of skin under the chin) out, you know there’s some aggression going on, usually between two males, with the resident alpha defending his territory. If this display isn’t enough, it can escalate into a full-scale brawl, which can result in serious injury or even death to one of the combatants. But usually, the Iguana is a pretty mellow creature, peacefully living on an abundant supply of leaves, fruits, berries, and flowers. 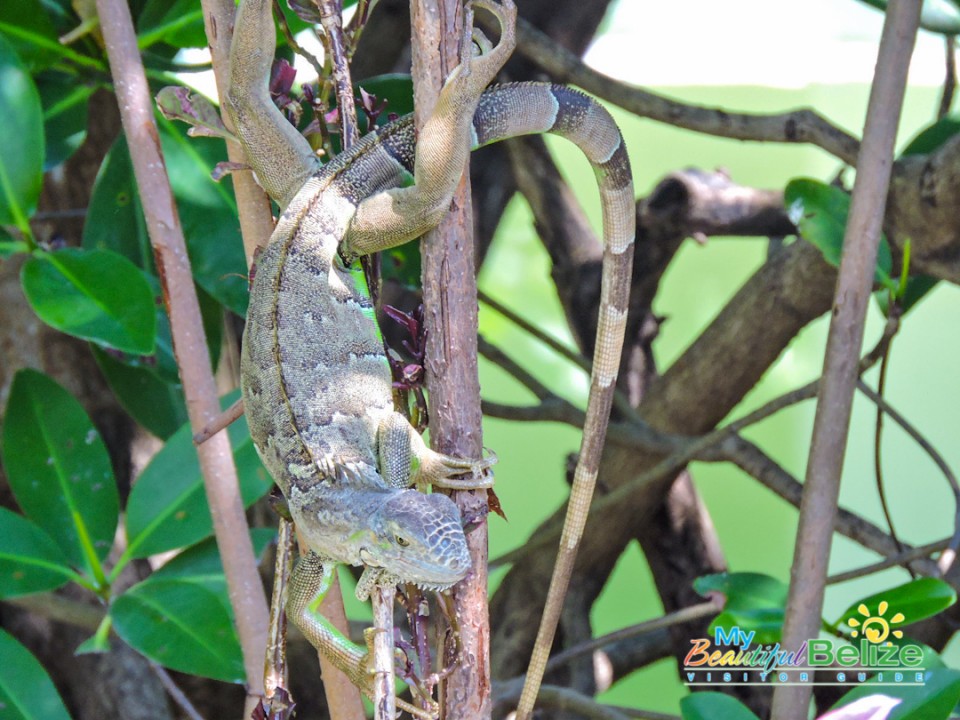 One of the coolest features of the iguana is the presence of a “third eye”, not in the mystical or Hindi sense, but as an actual transparent membrane in the back of its head. More formally known as the parietal region, it looks like a translucent scale about 5mm wide above the center of the iguana’s head. While not able to “see” exactly, it can make out shadows and images cast by hawks and other predators. When alerted to this, the iguana turns its head and uses its real eyes to make the decision to flee, fight, or hang out. It’s a unique early warning system that has much to do with the iguana’s survival as a species.

The crafty reptile’s other defenses are its coloration, which helps it blend into the surrounding forest, its long, whip-like tail, and the ability to leap off branches, dive into water and swim beneath the surface for some distance.

While you are exploring the country, you may come across an iguana sunning itself or diving into the water as your canoe passes. We hope you’ll see more than just some lazy lizard lounging around, and appreciate that here is another example of nature’s marvelous ability to adapt and evolve. And when you consider that he or she is just one of hundreds of thousands of crucial components to Belize’s rainforest habitat, a habitat of amazing interdependence and diversity, we hope that you’ll share our sense of never ending excitement and appreciation for the sheer elegance of our natural world.