That’s Mister Keel-Billed Toucan to you!

Written by Tamara Sniffin on September 22, 2016

Although the national bird of Belize is often compared to the goofy “Toucan Sam” caricature seen on the popular cereal box, the Keel-Billed toucan is a sophisticated bird worthy of great respect. For one thing, Mr. Keel-Billed would never be caught eating cereal for breakfast! A nice bowl of fruit, along with some insects and perhaps a lizard on the side would be more like it.
Scientifically known as Ramphastos sulfuratus, the Keel-Billed toucan gained notoriety when the Right Honorable George Price adopted him as the national bird on September 21st, 1981 when Belize became an independent nation. The bird wears the honor well, donning his regal bill that is colored with a mixture of green, red, yellow or orange. Made from a substance called keratin, the elongated beak is very light, but exceptionally strong.
Perhaps the only thing the Keel-Billed toucan and “Toucan Sam” have in common is their gregarious nature. Occurring in small flocks that roam together through the tree tops in search of food, this playful, beautiful bird is extremely social and is rarely spotted alone. Often they travel in groups of six to 15 other toucans. 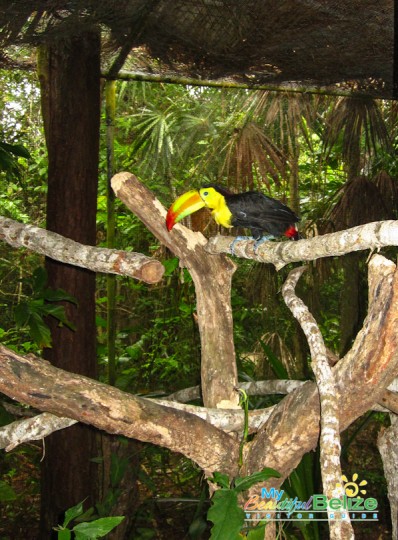 Its colors are startling, from its rainbow bill to its iridescent blue legs, few birds display such a variety of color. Its face, throat and chest are yellow with a narrow border of red on the chest; its body is black with red under the tail and white on the upper tail. The Keel-Billed has a patch of bare green skin around the eye, and the feet are arranged like a woodpeckers’, with two toes forward and two toes back. The toucan can reach 17 to 22 inches in height and 5 to 9 pounds in weight. Keel-Billed toucans can survive 15 to 20 years in the wild.
The Keel-Billed toucan’s range extends from southern Mexico to northern Colombia and northwestern Venezuela where they inhabit tropical and subtropical rainforests. They live together in tree holes with five to six other birds, where they all sleep with their bills tucked under the body to make room for their roommates. Natural enemies of Keel-Billed toucans are birds of prey and humans. Snakes, monkeys, weasels and other birds prey on their eggs. Major threats for the survival of Keel-Billed toucans are habitat destruction and uncontrolled hunting for meat and their beaks. Despite these factors, this toucan is still widespread and numerous in the wild.
The most recognized and celebrated bird in Belize, in some parts of Central and South America people avoid Keel-Billed toucans due to widespread belief that they are associated with demons and evil spirits. As crazy as that sounds, I guess our national bird is better associated with a breakfast cereal rather than a monster!