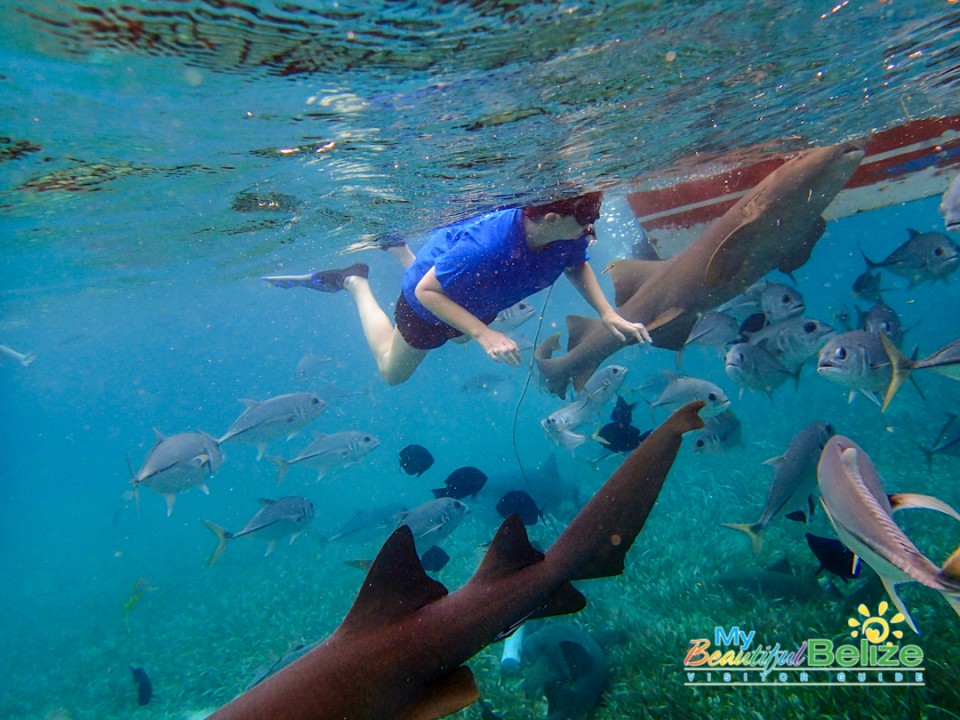 So, your tour guide says you’re going to swim with sharks? Are they kidding you reason as scenes from JAWS are replayed in your head. Shaaa…shaaa…SHARK!!!! that poor girl screams before she’s mercilessly pulled down into the bloody abyss. Oh, hell no, you aren’t getting me into the water with those eating machines, no way, no how!
For many visitors to Belize, exploring the waters of our Caribbean Sea is on the top of their must-do list. Be it snorkeling, diving, or just swimming off the beach, the water is teaming with beautiful, exotic marine creatures, and yes, maybe a shark or two, depending on where you are. For some of us, spotting a shark is an exhilarating experience we feel fortunate to have as we marvel at the beautiful creature in his wild habitat. For others, this experience can cause a heart-stopping panic attack! More than once I have been on a tour boat at Shark Ray Alley in the Hol Chan Marine Reserve when a guest has backed out of getting into the water for fear of these denizens of the deep. 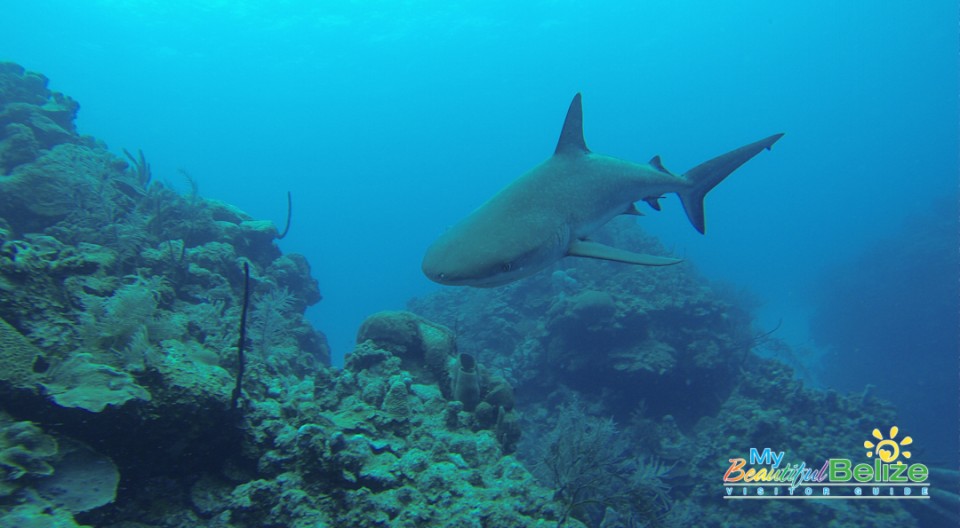 Reef Shark at the Blue Hole…can you see the difference between a Nurse shark and this handsome fellow?

And who can blame them? Although they’ve been portrayed as man eaters, our toothy friends have gotten a bad rap.
Belize is renowned for an impressive variety of sharks, from the offshore Whale Sharks that visit our southern waters in the early to mid-spring, to the inshore mainstays such as Caribbean Reef Sharks, Silky’s,Bull, Tiger and Hammerheads. Sighting these beauties while diving or snorkeling is a rare treat not often experienced. 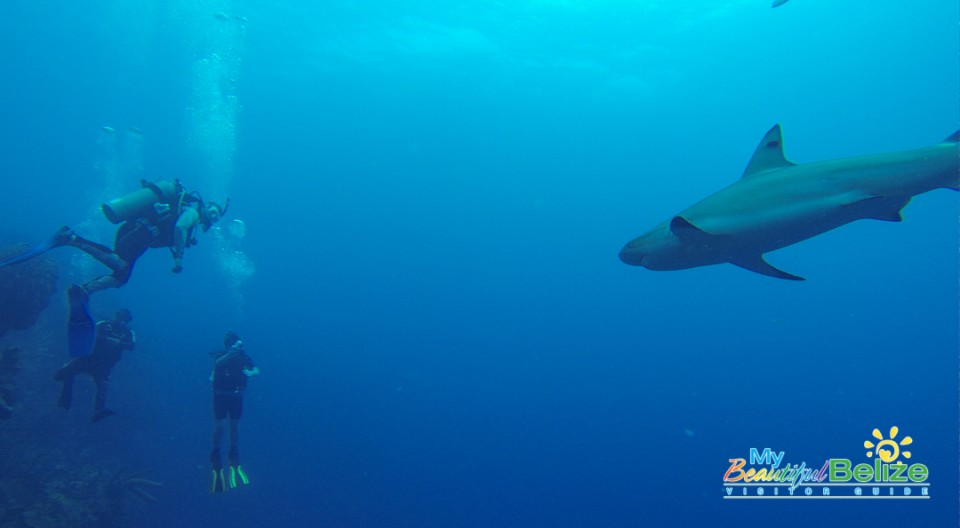 Scuba diving with sharks is a rare and exciting treat!

On the other hand, there is one shark you are most likely to come across while in the water, and that is the Nurse shark. Have no fear! This is where you can impress your friends by saying you swam with sharks, without losing life or limb! All sea life needs to be treated with due respect and given proper space, but not only are Nurse sharks the ones you’ll most likely see, they are for the most part, harmless to humans.
The scientific name for the Nurse shark is Ginglymostoma cirratum, which is a mix of Greek and Latin and means “curled, hinged mouth” to describe this shark’s somewhat puckered appearance. How the name “nurse shark” came about is unclear, but may have come from the sucking sound they make when hunting for prey in the sand, which vaguely resembles that of a nursing baby. They are kind of like sea-floor vacuum cleaners! 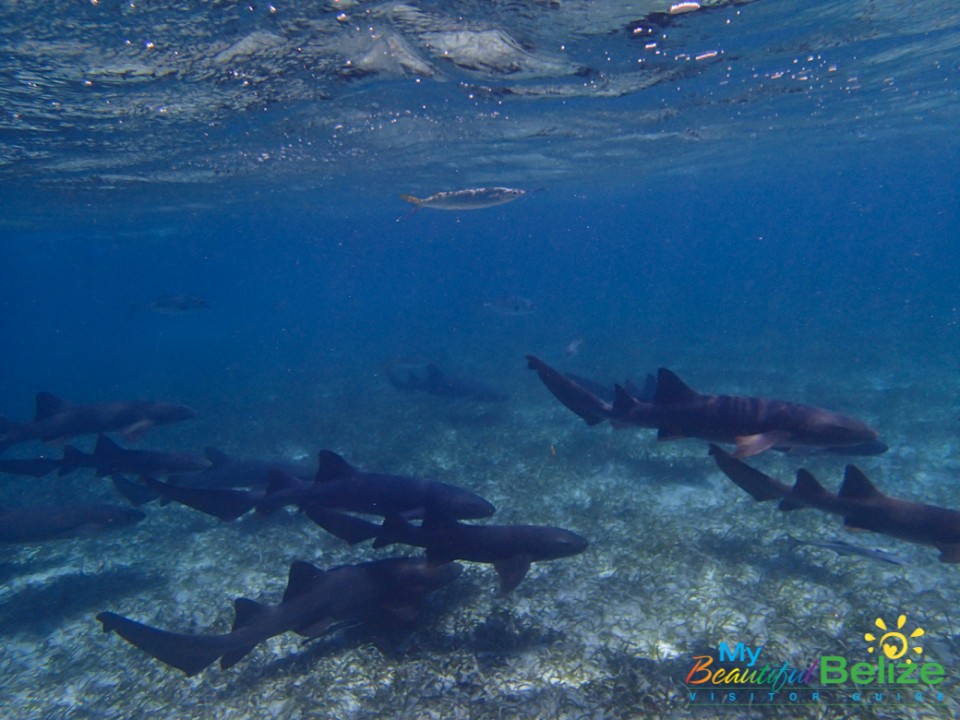 Nurse sharks are slow-moving bottom-dwellers and live in reefs, channels between mangrove islands and sand flats. They can be huge, up to 14 feet in length! They have very strong jaws filled with thousands of tiny, serrated teeth, and will bite defensively if stepped on or bothered by divers who assume they’re docile. If you don’t mess with them, they won’t mess with you, which is kind of the rule of thumb with most wildlife. Nurse sharks use their strong jaws to crush and eat shellfish and even coral, but prefer to dine on fish, shrimp, and squid. They are gray-brown and have distinctive tail fins that can be up to one-fourth their total length. Unlike most other sharks, nurses are smooth to the touch. 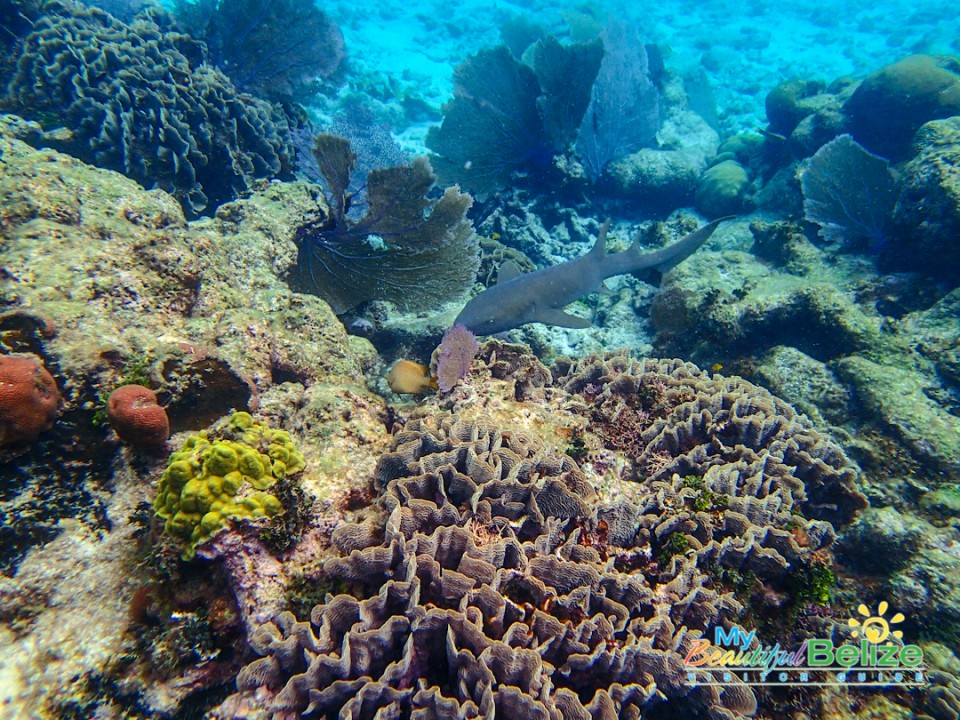 These docile sharks reach maturity at about 15 to 20 years of age, with an average life span of 25 years. Nurse sharks are ovoviviparous, meaning their eggs develop and hatch inside the female’s body, where the hatchlings continue to grow until live birth occurs. Gestation is six months, and a typical litter size is 21 to 28 pups. 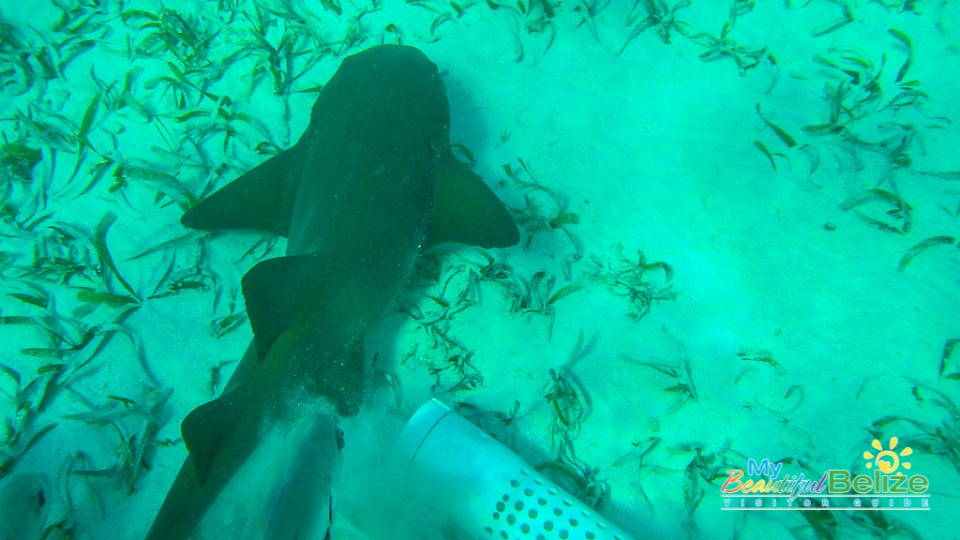 If you have the chance to swim with these underwater ambassadors it won’t take you long to feel at ease. Unless they are being chummed, chances are they will keep a good distance from you and be busy doing their sharky thing looking for food on the sea bed. You will not see big scary teeth, or aggressive behavior as long as you keep your hands out of their mouths! You may be tempted to touch them but as with all marine life, please refrain from doing so.
Swimming with sharks is just one of the amazing adventures you can have while visiting Belize, so don’t let your fears get the best of you. Jump on in, the water is fine, and so are the Nurse sharks.