Sunday Fun Day at Canuck’s – come on over! 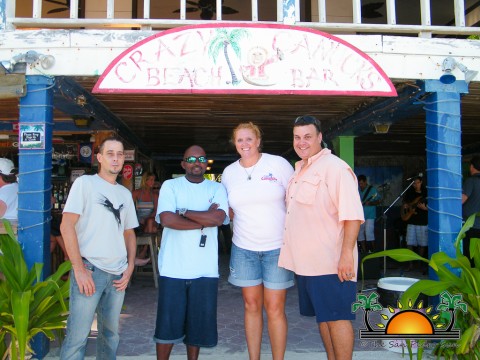 There is so much of Belize to write about, coming up with just one thing to share with readers is a task unto itself. But with an open invitation from our friends down at Canuck’s to experience their legendary Sunday Fun Day, it wasn’t too hard to decide this week’s fun topic.

Sundays on Ambergris Caye are generally considered family day. As you drive along our various beaches, you find families with what would appear to be their entire dining room – arranged on the beach; socializing, eating and basically spending quality time with each other.

Although that certainly is an option, another favorite past time for ex-pats as well as locals is Crazy Canuck’s Sunday Fun Day. Located on the beach at the Exotic Caye Beach resort grounds, Canuck’s is a short ten-minute walk along the beach from the Airstrip, or a five minute taxi ride from anywhere in town. There’s something about a slow stroll along the beach that seems to provide a very calming effect on me. With Sunday’s weather holding up beautifully, the choice was clear indeed – a walk over it was!

Canuck’s has somewhat of a rustic charm to it. It’s very welcoming and Rob and Krista are absolutely amazing at making sure that all their patrons are well taken care of. Originally from Cleveland, Ohio USA – the couple visited the island about a year ago and fell in love with the place. They knew they wanted to live here, so it was just figuring out what they’d do to become a part of the community. Canuck’s was available and they jumped at the opportunity. 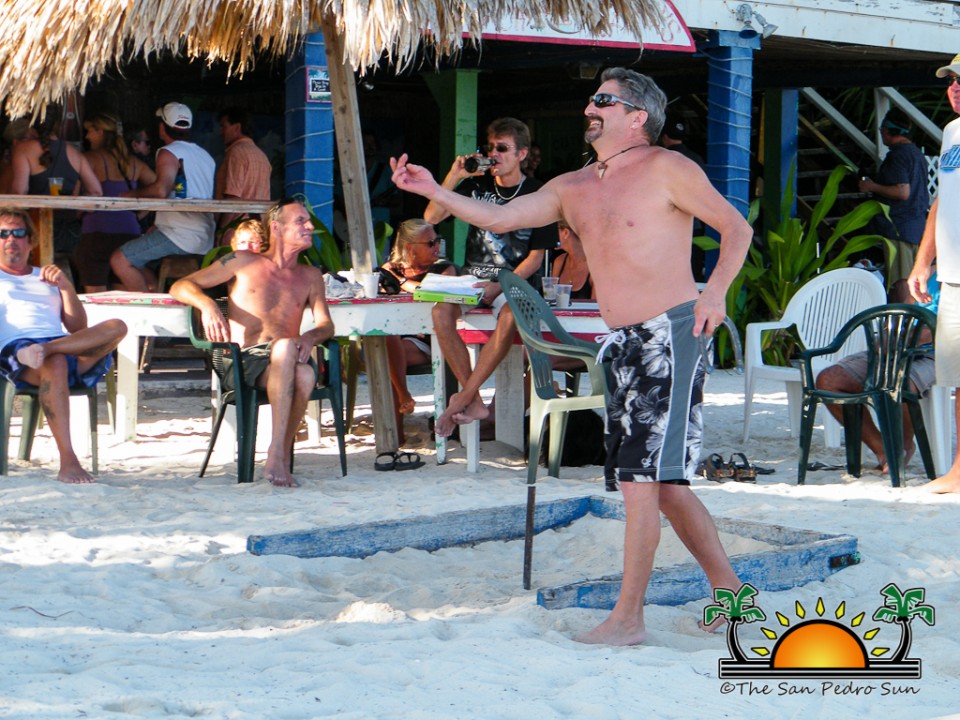 The beachside horseshoe game is a crowd favorite and according to Rob, on an average, there are about eight to ten games played every Sunday. The game seems quite fun. Two poles are buried in the sand opposite each other at a length of about 30 feet apart. The objective is to toss the horseshoe around the pole. The person or team that gets the most horseshoes on the opposite pole (or closest) wins. Even as a spectator I must admit it is quite interesting to watch the guys and gals struggle to get that horseshoe around the poles! 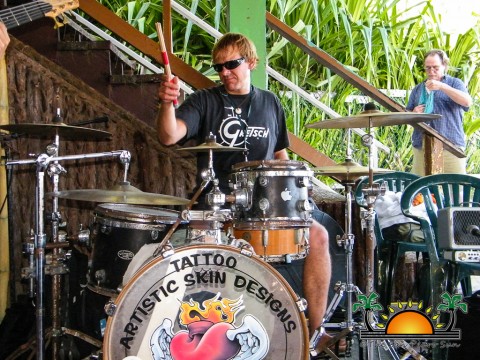 Games not really your thing? Canuck’s provides live music every Sunday from 3pm with Gino and The Shackshakers. It doesn’t take long before the dance floor is bopping with folks gyrating to the rock n’ roll rhythms of the band, and if dancing is not your cup of tea, the music and people watching offers plenty of entertainment.

Manning the bar are, Ali, Krista and Chris. They’re more than happy to whip up one of their many frozen drinks. I was in heaven. Shortly after I arrived at the establishment and made my fabulous presence known, Rob was over ensuring that I was taken care of. Now, drinking is fun – but every now and then we just have to cater to our lil’ tummies. And Canuck’s provides for that – ohhh do they EVER!! 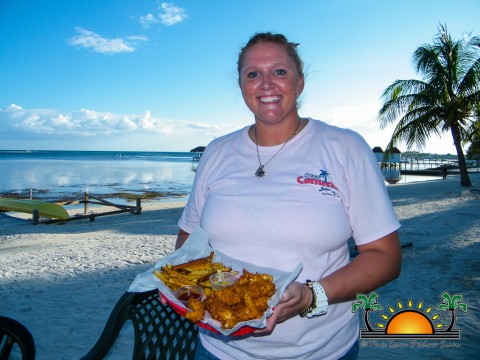 Welcoming me to Crazy Canucks were: Coconut Chicken Fingers –fresh cut chunks of chicken breast breaded with an amazing blend of coconut flakes and spices, then deep fried to a crispy perfection. Served with Canuck’s spicy mango dipping sauce, this is absolutely mouthwatering. While the ‘fingers’ are crisp to the touch, the meat is tender, juicy and uber flavorful. These are also available as Coconut Lobster Bites (when in season) and are truly a tropical crustacean taste sensation! Add a side of deep fried homemade seasoned fries and an ice cold Belikin beer and well – perfection is accomplished. There are definitely more choices from which you can choose, it’s just that chicken happens to be my signature food *wink*! Also available on Sundays are paninis, sandwiches, coconut fish fingers to name a few – all equally delectable. 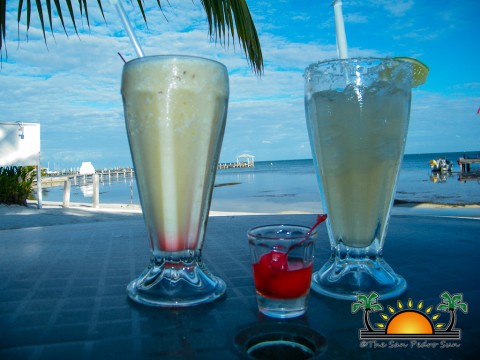 With my hunger satiated, it was time to have some real fun! Drinks? How did you guess?! Canuck’s possibilities are endless, but I decided to start off with a Piña Colada. With fresh ingredients, especially pineapple (none of that squash or pre-mix, thank you very much) – my first cocktail for that Sunday was indeed very tasty. Following this, I tried the Canuck’s Margarita. Now I must admit…finding that one, well-made margarita can be a challenge. But putting past experiences aside, I dive right in to a cooling, just-right blend of triple sec, fresh squeezed lime and tequila; Canuck’s Margarita definitely surpassed my expectations. Next on my list to try was the: Blue Hole. Basically it’s a Belizean Long Island Iced Tea, AKA, a dangerous blend of Coconut Rum, One Barrel Rum, Vodka, Tequila, pineapple and lime juice with a “plunge” of Blue Curacao. How many fingers am I holding up? Three … no, wait… four! This is the effect of the Blue Hole. Other beverages with names like Dirty Howler Monkey, Tropical Brainstorm, Pain Killer, Hurricane and Sex with a Lobster are definitely a guaranteed way to brighten up any Sunday afternoon.

It was certainly a great Sunday at Canuck’s Sunday Fun Day – what really impressed me was the service. The owners mingle with their clients, making sure that when possible – no one goes with an empty cup. Re-fills are constant, the smiles are genuine and the drinks and food delicious! 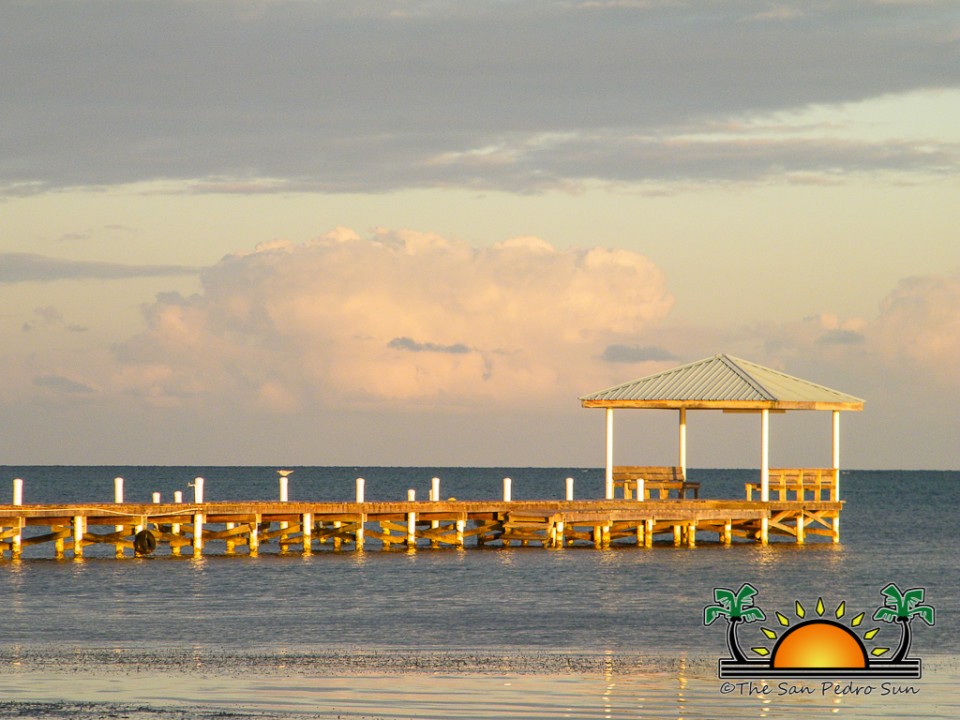 Oh yeah, and THE VIEW!! Absolutely amazing! The general cool trade winds are a constant along the beaches of San Pedro and at Canuck’s – it adds to the ambience of sandy beach, swaying coconut palm trees and crystalline waters leading to the lily white break at the reef, less than a mile east to the horizon.

Monday nights is a constant and with the Punta Boys entertaining guests from 7:30PM through midnight. On Tuesday nights, Canuck’s now offers Live Band Karaoke! This is the only place on the island to sing with a live band. Can you say – Superstar?!?! Feel like a rock star with your own personal band while YOU blast out the lyrics to your favorite songs on the microphone.

Crazy Canuck’s is opened daily from 10:30AM through midnight with happy hour specials from 3 – 6PM. When you get a chance, swing on by at Crazy Cancks and spend some time relaxing with frosty drinks and scrumptious bar snacks and of course, in the company of the ever welcoming Rob and Krista. 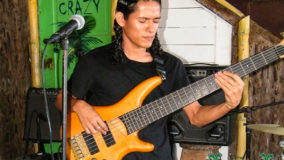 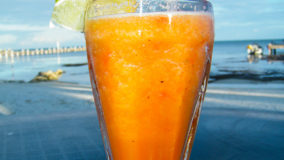 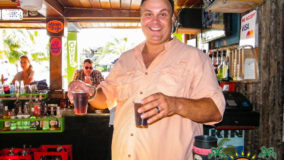 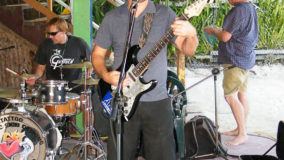 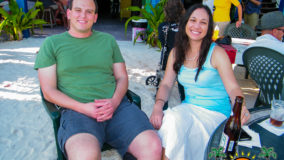 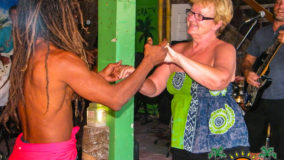 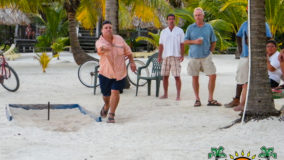 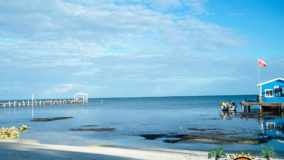 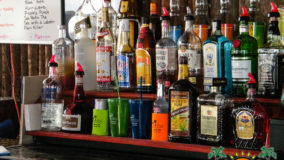 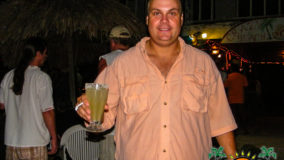 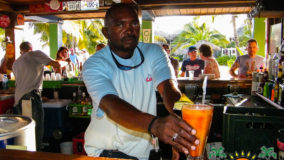 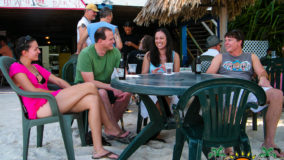 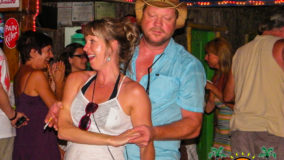 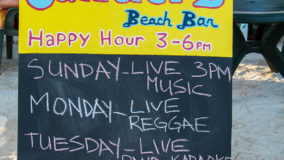 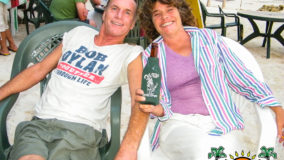 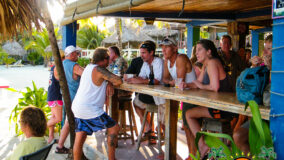 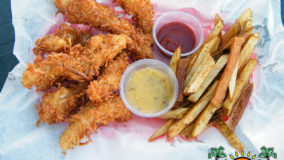 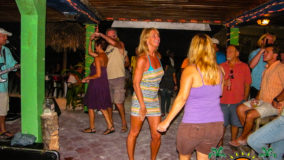