Putting “Morning Matters” host Rhonda Crichton on the other side of the microphone. 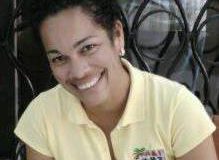 It’s not every day that your gift for gab lands you a job opportunity of a lifetime, but for Belizean “Morning Matters” TV and radio show host Rhonda Crichton, her inquisitive manner and talent for engaging conversation has done just that. After years in the media, her popular “Morning Matters”talk and advice shownot only airs daily on Channel 7, but it is now syndicated in Barbados, Grenada and Trinidad, making her the first Belizean program to ever be syndicated. So just how did this bright-eyed, charismatic conversationalist get where she is today? For once, we change seats with Ms. Rhonda and put her on the other side of the microphone to find out.

Who would you say you inherited your ‘gift of gab’ from?
I’m not sure, my mother was a teacher and my father was a mechanic. I would say my father spoke to me most as a child and although he was not verbose he was more outgoing than my mother, but really I think it was something I developed myself. I always thought if I think something I should share it with that person and I was always a talker I guess…of course not everyone wants to hear what I think so I make sure I am engaged in a conversation so that I know you are interested in what I have to say.

When did you start “Morning Matters” and why?
Morning Matters started six/seven years ago on radio. I had a restaurant in the city [Belize City] but I could not afford to pay for advertising, so I went to Rene Villanueva JR of Love FM and offered to work for them for free for two hours a day in exchange for some ads. He was like “Sure, let’s do that!” So I was driving to work, wondering

what am I going to call this show and just decided off the top of my head to call it Morning Matters. We did not have a format, we just let people call into the show and talk about anything they wanted. So they started calling in and telling me their relationship problems.It wasn’t like we asked them to start doing that; it just started to happen.  Of course phone calls can lead to trouble because you can hear the emotions in someone’s voice and it is very hard not to get emotionally involved, so I would take the questions as texts, which of course saves time and no one is on the phone crying their eyes out. Texting also keeps the person anonymous which is very important. 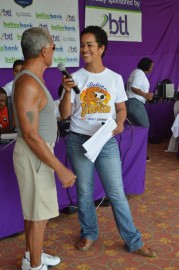 And over the years what happened?
After four years on More FM (a Love FM subsidiary), I left to travel, and for about six months while I was out of the country the show was only on an Internet stream called Stickam, and at one point in time we were the most watched show on Stickam in one day, and at that time it was just me. We made #1 and then we managed to stay in the top ten on that stream,so that is where people used to go to watch us. Then, when I went to St. Vincent, we put it on Cross Country Radio. When I returned to Belize, I thought ‘let’s do something else’, so about two years ago we started Morning Matters on Reef TV in San Pedro and then worked with getting the audio on smaller radio stations around the country.  Then in November 2012 we moved the show to Channel 7 in Belize City, which airs countrywide. In April 2013, we syndicated to Barbados, Grenada and Trinidad through the Gial Network. We are the only independent media that produces a daily show and nobody else in this country has syndicated their shows, so we are the first! So we have come a long way in a short time but I have to say I couldn’t do it myself…so many people have helped me get here. So many people believed in me…I can’t begin to list the names! My partner Drew has been extremely supportive in this venture. It is very rare when you find someone who supports your dreams like that. We hope that someday Morning Matters will be a household name throughout the entire Caribbean because those are my people…they can relate to what we go through the most.

When giving advice on your show do you draw from your own experiences? 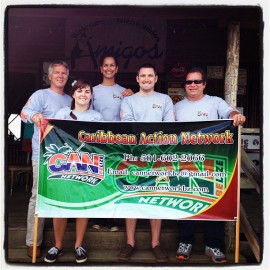 Yes I would say for the most part yes, I have lived a full life! I’ve been in different relationships, I’ve watched myself grow, I’ve seen my parents…so  I think I draw from all of those experiences and I put them together in a common sense way. Most of the time I think I use common sense as my response, if it’s not working either fix it or forget it, which is how I see it, and that is not always easy. I am not a counselor; I base it on my own life experiences. Some say, Rhonda, you are too harsh, but I say all your friends are too easy on you; they don’t want to tell you what they really think. It’s not that I am smarter or more intelligent than anyone else; I just see life a little bit different, thanks to the grace of God. You have to believe in a greater power, whatever that may be for you.

Do you think what you do is helpful?
If I didn’t, I would find something else to do! I started this because I wanted advertising for my restaurant but the more I got in to it the more I realized we need to empower each other. Like I said, I don’t know everything, but in this lifetime I have come across a lot of people who have empowered me and my audience. I think it has been helpful in a great way because it has trained us all to think differently, and when we think differently we act differently, you have to THINK it first. 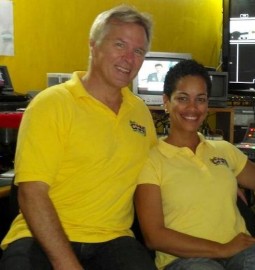 So what would your dream be?
My dream is to be of some use to society as long as I’m alive, to contribute in a positive way. But where Morning Matters is concerned I would say for it to move through the Caribbean, hopefully into North America. I would like people who turn on their TV’s to watch Oprah want to do the same to watch Morning Matters; that would be my greatest dream. When Morning Matters got syndicated, Drew and I thought, “Wow our dream, it really happened! Now we have to dream bigger!”

I would also like for men and women, women especially to take more personal responsibility for the choices they make and realize that your power is not given to you by a man, it seems like a lot of women feel, based on the texts I get they if they don’t have a man they are not important, not powerful, not beautiful. They need to be told by a man, even if the man is not worth it they still believe it.  In this generation I hope that women realize they have a man because they WANT one, not because they NEED one.

What’s next for “Morning Matters”?
Jamaica is our next market. Drew and I have also started CAN Network, which of course produces Morning Matters but we will be producing other stuff as well, like commercials, biographies, whatever.

Ms Rhonda and her “Morning Matters” program is already one of the most popular TV talk shows in Belize. With her drive and ambition there’s little stopping her from realizing her dreams, and Crichton is just one more Belizean success story that we applaud! Viewers outside of Belize can watch “Morning Matters” some of the episodes on stream.tv http://www.ustream.tv or check out CAN Network at https://www.facebook.com/CANnetwork