Written by Mary Gonzalez on November 7, 2013

One of the most beautiful things about Belize is its people and their culture. In a world where ethnic groups’ numbers are dwindling, and languages and histories are fast being lost, finding examples of living history in a modern world is a treat. Belize’s cultures include the Mestizo, East Indian, Creole, Chinese, Mennonite, Maya, and Garifuna, and there are certain regions throughout the country that ‘belong’ to each group. The southernmost district of Toledo is known for its dense Maya population, while the district just north of it: Stann Creek, is considered a primarily Garifuna area. There are other ethnic groups in the area, but when one thinks of Stann Creek, one thinks of the rich culture that the Garifuna have brought to this area, especially to the village of Hopkins. 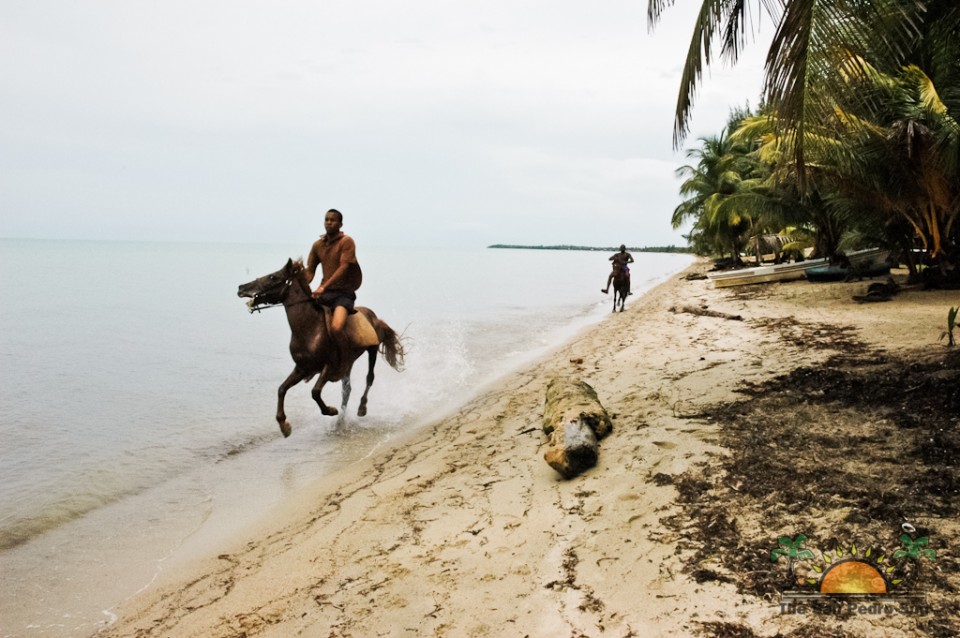 Hopkins is a slice of heaven; quiet and relaxed on the shores of the Caribbean. Interspersed by fishing shacks, homes occupied by the Garifuna and dotted with fruit trees, this village is home to culture and beauty. Some may describe it as sleepy, and when you’ve spent a few hours indulging in a couple cold ones and snoozed under the hot sun, perhaps sleepy is all you can think of. But right there to wake you up is the stirring sounds of palms hitting drums, beats filling the air in a glorious rhythm that simply hits your soul. For if there is one thing you must know about the Garifuna, it is this: they have the beats! 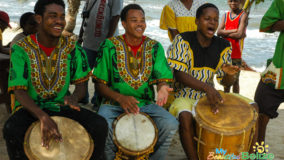 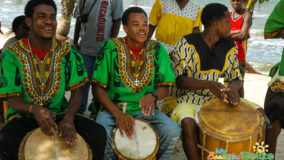 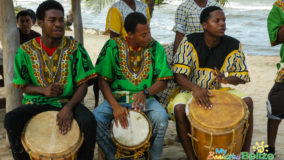 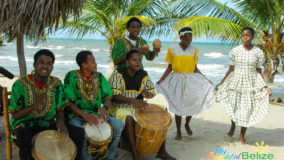 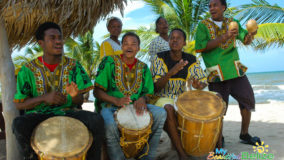 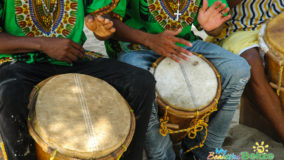 In 2002, the Lebeha Drumming Center was established by drummer Jabbar Lambey and Canadian Dorothy Pettersen. The full group is comprised of Jabbar Lambey, Warren Martinez, Clayton Williams, Ronald Williams, Shaquile Martinez, Joseph Casimoro, and Kenrik Lewis. Lebeha provides lessons for those wishing to take their turn at the drum or who want to learn a few dance moves. They also create their own music. With drums crafted by Austin Rodriguez of nearby Dangriga, the sounds are a testament to years of talent passed down from generation to generation. The drums are played by hand and the trick is to be able to play fast while keeping the tone strong; qualities that young Warren Martinez has in abundance.

Of course, knowing all this is one thing. Experiencing it live is quite another! 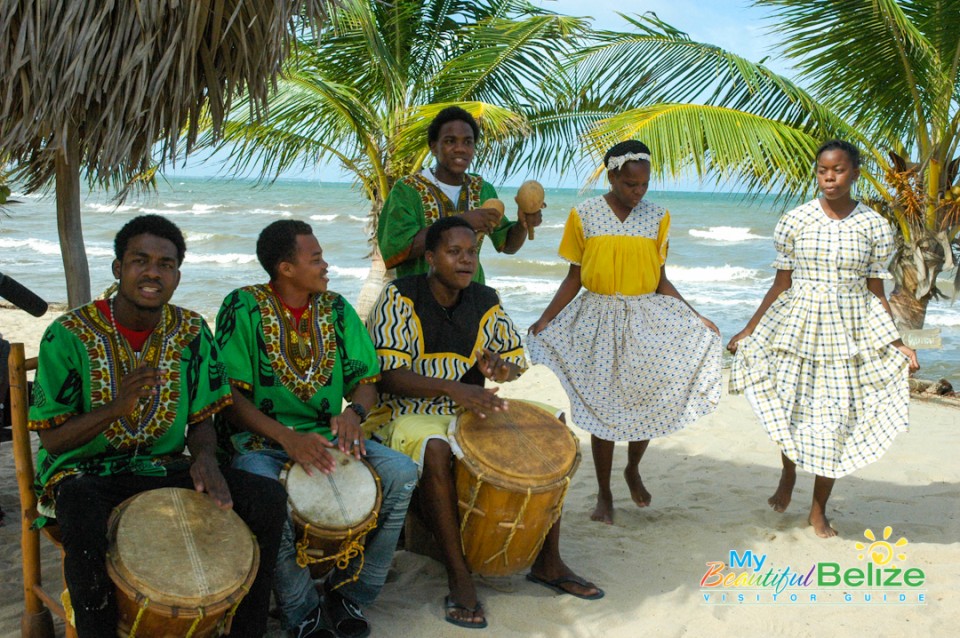 A while back, I got to enjoy the rich Lebeha sounds while on a tour of the southern region. My companions and I convened on the beach in front of Driftwood Bar where drummers awaited us. In their billowing multi-colored costumes, the males sat with drums at their feet, while behind them two lovely young ladies in the traditional Garifuna dress of predominantly yellow and white awaited the moment when their dance would captivate a willing audience. When the first palm hit the tautly stretched skin on the drum, it struck a chord far beyond mere music. As the musicians all joined in, with lilting voices and fast drumming, we simultaneously felt the need to move our feet and twirl around. Luckily, the two young dancers demonstrated some moves for us (lest we embarrass ourselves trying out moves we had no clue about). 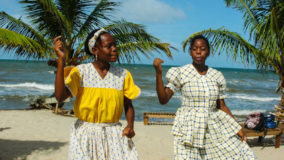 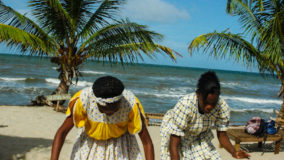 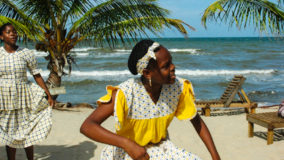 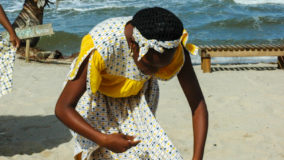 The stories behind the dance are just as intriguing as the combination of the various drumbeats. The Garifuna language, mellifluous and exotic, takes on a sweet lilt when voices rise in unison, singing about the daily events of life. Arms sweep wide in a show of chopping, brows are wiped, all while feet move in a uniform shuffle; deft fingers ‘pin’ laundry, arms move in circles as though stirring a pot of food, and voices rise as they sing about their day. A few of us take turns to practice until we have been deemed suitably ‘trained’, then we’re thrust into the spotlight on a beach in Hopkins. We dance before our less brave colleagues, feeling the guiding sounds of the drums, ignoring the titters as our less than graceful feet miss the notes, until we’re simply dancing because it is a wonderful thing to be experiencing a cultural sound that so many never will. 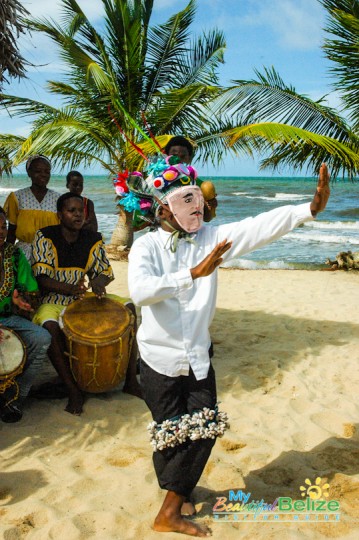 Our attempts were quickly overshadowed when two impish young men we had seen earlier, dressed in black and white, suddenly moved to the forefront. Covering their faces were the multicolored, feathered masks of the Jankunu dancers. On their lower legs were tied strands of shells that made a pleasant rusting sound with each step. They circled each other in a dramatic fashion, then the bolder (and sassier) one stepped into the spotlight. What we saw was drama, talent and high energy: his bare feet pounded on the sand, scattering it every which way each time they hit the ground. He leapt high in the air, twirling, hands gesticulating and legs contorting before landing and leaping once again to a different set of moves. The mask – well the mask gave an anonymous vibe to the dance, its painted features unchanged throughout the entire performance.

And just as suddenly as he began, he landed and mock-bowed to the other dancer before moving away. The other dancer took his spot, shuffling his feet, almost bashful, lulling us into a false sense that his dance would be the opposite of the first. Wrong! Just as he shuffled his last step, he too began the leaping, prancing dance. His performance became almost aggressive; with each step he landed near the first dancer, baiting him, his masked face jutting proudly out, calling out his opponent. In the background, almost forgotten in the intensity of watching the Jankunu battle, the dizzyingly fast rhythm on the drums matched the fierce warrior-like dance taking place. It was unquestionably the most hypnotic experience, and when the dances were over, the breath we didn’t know we were holding slowly came out as the applause swelled. We cheered for the drummers and the young, yet intense dancers who portrayed one of the oldest styles of dance of the Garifuna culture, and we cheered because we had just witnessed a piece of living history in our own country. 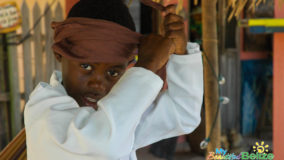 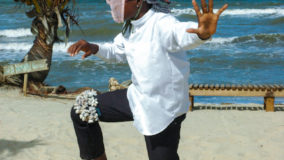 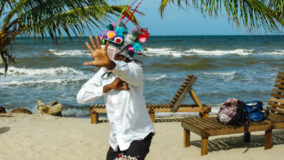 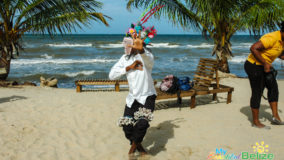 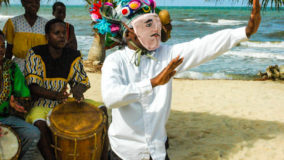 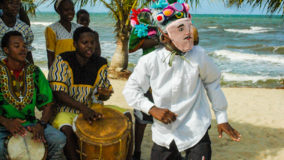 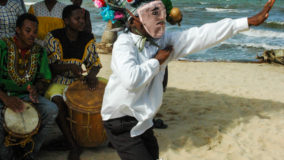 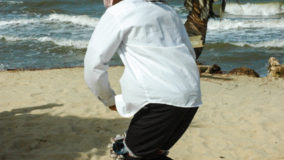 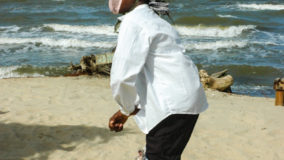 Lebeha Drumming Center is located in Hopkins village, and can be contacted via Facebook under the same name. (Lebeha means “The End” in the Garifuna language.)

About the drums/instruments, music, and dance: 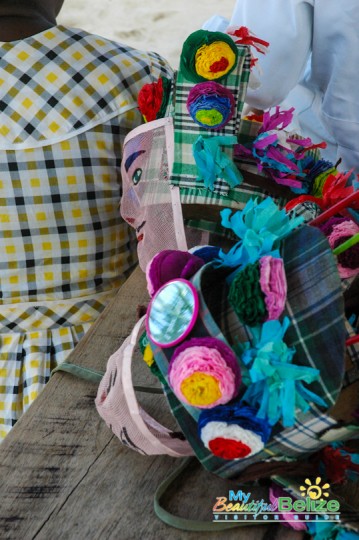 The drums are often carved from mahogany or mayflower wood and topped with deerskin hides. They are tuned by ropes on the sides and are then placed in the sun. The Primero drum is also called the male drum because it has been birthed from inside the larger female, carved from the same log. The Primero drummer and lead singer, or Gayusa, directs the musical changes, shows the greatest virtuosity, and calls the songs for the others’ response.

The shakas (similar to maracas) are a calabash gourd, and inside is contained seeds from a fruit tree. The turtle shells are exactly that, shells from the turtle strung together and strapped around the player’s neck. There are no guitarists at Lebeha, although guitars are often used in this style of music.

The [Habinahan Wanaragua] Jankunu (John Canoe) dance has roots in Africa and Belize’s experience with slavery from its days as a British colony. The Jankunu dance is exclusively for males – females are allowed as singers but that is the limit of their participation. The Jankunu is a satirical dance where individuals dressed like colonial slave masters (complete with pink masks – meant to be representative of the British) who dance off beat to a fast tempo drum 4/4 beat. The Wanaragua is one of the few dances where the Primero (lead) drummer follows the dancer’s movements, and not the dancer dancing to the beat of the drum. An intense observer will note that the Primero drummer watches the dancer’s feet, drumming to keep the dancer’s rhythm – as opposed to making the dancer follow the musician’s tempo. It is believed to be another subtle mocking of the slave master by doing the opposite of what should be done.

Those wishing to experience this spectacular, colorful and absolutely thrilling traditional dance should attend the Habinahan Wanaragua Jankunu Festival often held a day or two after Christmas Day on the scenic Y Not Island in north Dangriga, Stann Creek. 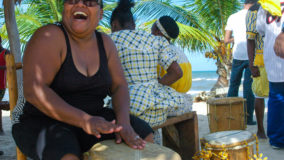 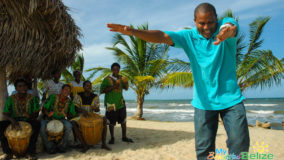 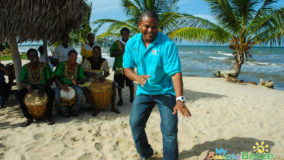 For a full immersion into the beauty and culture of the Garifuna people, November 19th is the big date. It is a celebration of the Garinagu’s arrival up the river in Stann Creek in 1832, known as Garifuna Settlement Day. Their celebration typically involves music, dancing and traditional foods and arrival re-enactments, complete with costumed musicians on boats. San Pedro Town’s Garifuna community celebrates annually, although the bigger celebrations take place in the Stann Creek district.