The fire hearth has always played a central role in rural life, and for a couple from Double Head Cabbage, part of an established evening routine was to check that all sparks on the hearth had been put out and all leftover food was properly covered.
The hearth’s base, which was a wooden structure very much like a table was covered with a thick layer of clay or limestone. An iron bar on a tripod of stones was used to support pots. Any ashes from the firewood would remain in the hearth. One evening the couple was in the kitchen looking directly at the hearth, when they saw what looked like little men frolicking mischievously. The creatures were tiny, and their skin almost exactly matched the colour of the ashes in which they were playing. 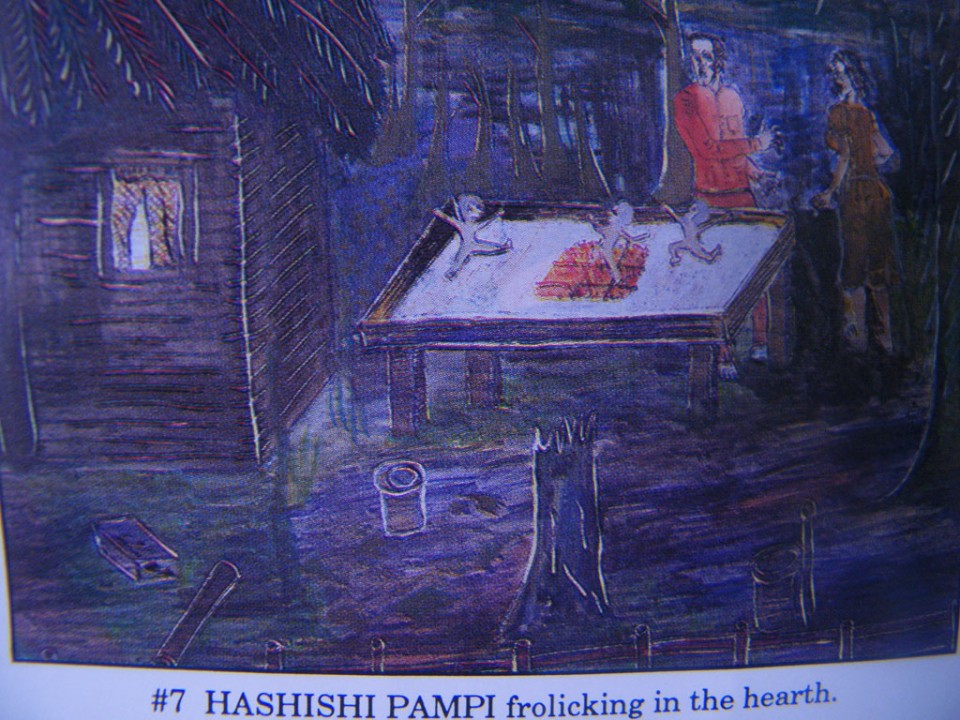 While talking to some villagers about what they had seen, the couple was told about the HASHISHI PAMPI,* small, harmless creatures who are found wherever milpas are burnt and in the pine ridge areas, where forest fires frequently occur. They are ashen in colour, hence their first name HASHISHI , and because they are smaller than duendes , their second name is PAMPI, which can be traced to “pampi pig,” which, in the Caribbean, refers to a small boy or dwarf.

Stories of HASHISHI PAMPI are prominent among rural Belizeans, who tell of seeing them wriggling or rubbing their bodies in the warm ashes of a fire hearth, while their heads stick out in plain view. They often feast on items roasted in the intense heat of their playground.
HASHISHI PAMPI were also seen by loggers and chicleros, playfully jumping up and down in the ashes left after a long fire. In the evenings they often leave their fiery domain to wander about the roadside, sometimes frolicking in the road and holding up traffic.
*Other names are AHSHISHI PAMPI, HASHESHE PAMPMI and ASHES POMPEY.
The CIPITOS, much like the HASHISHI PAMPI, are well-known characters in El Salvador. They are tiny creatures who sleep in the ashes of the fire hearth at night, hiding under the comal or griddle for warmth. When the cock crows at daylight, they come out of hiding and run out to the fields.