Hundred of islanders on Ambergris Caye look forward to partaking in the festivities for the island’s namesake and patron saint, St. Peter (San Pedro). The annual event combines three elements; the religious, the cultural and the festive, activities that are synonymous with La Isla Bonita, San Pedro. Celebrated annually on June 29th, el Dia de San Pedro is perhaps one of the most anticipated celebrations for the over 12, 000 residents.

“La Bajada” is the traditional and religious celebration that starts off the ten days of novenas leading up to Dia de San Pedro. During La Bajada, the Saint’s statue is brought down from its permanent altar inside the Catholic Church. This ceremonious action signifies the start of the novenas, which are nightly processions where the faithful sing and pray for a bountiful fishing year ahead. The statue of St. Peter is taken to a different home for each of the first nine nights of the novenas. On the tenth night, San Pedro is returned to the church on June 28th, on the eve of El Dia de San Pedro.

On the 28th, after an hour’s mass inside the church, residents gather outside at the outdoor statue of Saint Peter for La Alborada (all night activities until dawn). The air is filled with cultural activities, mostly Mestizo dances that were adopted when the Mexican Mestizo migrated to Belize during Caste War. The hog head dance (La Cabeza del Cochino), which depicts a baked hog head placed on a platter with special breads and12 different colored ribbons or fabrics representing the different months of the year, is perhaps one of the dances most islanders look forward to enjoy. Other dances that are performed is the Bottle Dance (El Baile de la Botella) which features a male referred to as “el borachito” (the drunk) dancing with a bottle on top of his head surrounded by young female; the “El Torito” dance where the female overpowers the cowboy with her irresistible beauty, and in the “El Degoyote”, a dance in which the female flirts with the male eventually controlling his mind and body. Following the lively dances, the crowd, which by midnight has turned into quite a large multitude, sings a serenade to Saint Peter. The serenade is followed by even more celebration, with marimba music and live musical band complimented by traditional Mestizo food.

On the 29th, the annual dawn Fishermen mass kicks off the day’s activities at 4AM. Attended mostly by males, the well attended mass gives the fishermen the opportunity to celebrate, thank and ask Saint Peter for protection while at sea. The mass of thanksgiving is preceded with the annual traditional fishermen breakfast at the Lions’ Den.

Perhaps one of the most unique processions in the entire country is conducted in San Pedro Town. The town’s statue of Saint Peter is mounted on a boat adorned with flowers at the municipal dock. The fishing boat with Saint Peter then leads a boat procession northwards, then into the cut at the bridge and ending at the El Embarcadero (docking area) where fishermen used to clean their catch of the day. After the boat procession, fishing vessel each take turns to be blessed by the priest. Saint Peter is then returned, during a street procession, back to church. The religious celebration concludes with an open air mass for the entire island outside the church on the evening of June 29th.

The festive activities kick off at the Saca Chispas field on the night of June 29th, organized by the San Pedro Town Council. Usually, a short ceremony is held followed by traditional dances. Dance groups from mainland Belize and nearby Mexico share the stage with local dance groups putting on a very entertaining and well choreographed show. The night comes alive when the annual fireworks display lights up the sky on the lagoon side of the island. This is followed by live traditional marimba music and an annual karaoke competition. The night continues until the wee hours of the morning with music from the island’s famous Rompe Raja. 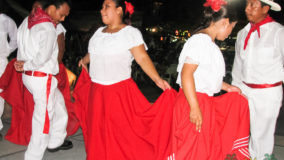 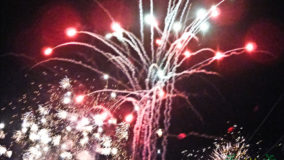 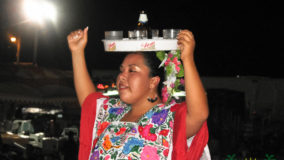 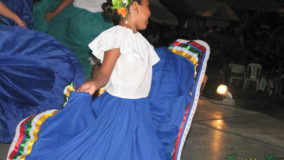 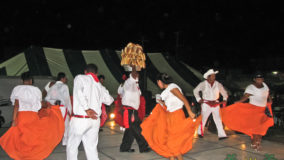 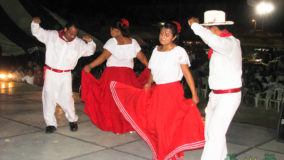 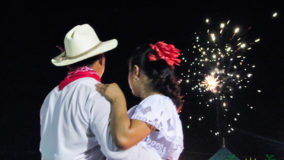 Throughout the weekend, other great events such as a football marathon, international folkloric dance performances and more provide entertainment, and capping off the celebrations is a mega dance. On every night, islanders and visitors alike get to enjoy traditional food such as the maja blanca (rice porridge with cinnamon), cochinita pibil (a whole pig baked underground in banana leaves and special spices), tamales and tacos. Whichever of the delicious Mestizo dishes you decide to try, you will surely enjoy a little of the island’s tradition.

If you are lucky to be on the island during the celebration in honor of Saint Peter, then you can rest assured that you will find an experience you will enjoy. Whether you are looking to be a part of the religious activities, take in the cultural celebration or even just sit back for the entertainment, el Dia de San Pedro is a fantastic opportunity to take in a little bit of it all. Come enjoy a San Pedro tradition!