Belmopan City is the capital city of Belize. It is located in the middle of the Cayo district; about a hour’s drive from the old capital of Belize City. Being an inland city, its temperatures are quite high during the day but much cooler at night.
Belmopan is the center of government activity. In its center are the National Assembly (or Parliament) Building and the majority of central government offices. Today Belmopan is one of the safest cities in Belize. It has evolved into a thriving city with four banks, embassies and consulates, several supermarkets, good night life, well-laid out streets and avenues and paved roads. Belmopan is a one hour drive from Belize City, heading west on a well paved highway. San Ignacio and Santa Elena are forty minutes further west. The population of Belmopan is rapidly expanding as Belizeans and immigrants have flocked to the area and built several suburbs such as Salvapan, San Martin and Las Flores. Maya Mopan is an interesting new suburb formed in 2004 by a spontaneous migration of Mopan Maya and Ketchi Maya immigrants from the south and west of Belize. 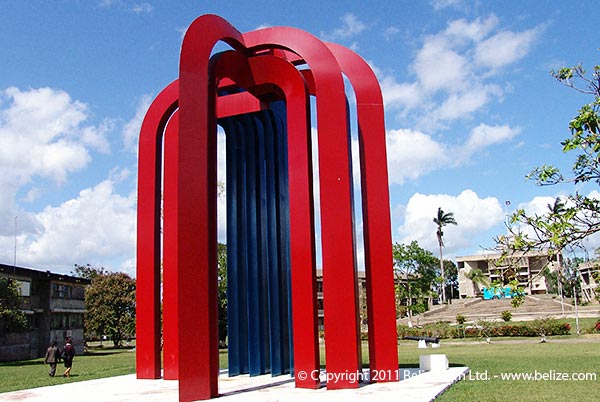 Belmopan is a quick one hour ride from Belize City. Although there is an airstrip just outside Belmopan, it is usually more economical to catch the bus. Buses leave and return each hour.