Imagine walking down the beach barefoot, enjoying the sounds of the waves as they lap at the shore. The stretch of sand going ever forward, the soft squelchy feel of that … eeeewwwww…what is that!! What on earth have you stepped on? *shudder* It’s time to turn on the phone light…look down with trepidation and search…nothing!

Short of a true-to-life Stephen King novel, there cannot be disappearing squelchy things on the beach. One must investigate. Look closer – get down on all fours and peek, if one dares that is. Well, we did, and imagine our surprise at what we found! 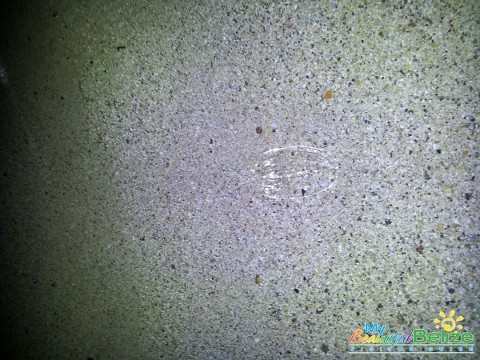 So transparent was this squelchy, squishy jellyfish, which was in obvious distress as it had washed out on shore and gasping for breath, it was hard to locate in the dark of night. Overhead, true to scary story form, lightning started flashing, and thunder pealed and clapped loudly. The temperature had increased in the still, windless evening – rain would pour shortly.

Time to take pictures of the squishies – yes, there were more, down and around the dock where we had found the first one, there were at least 9 others beached, about to get beached and one unfortunately long-gone. We found a flat piece of driftwood and gingerly lifted the ones we could save, flipping them back in the water. Three long tentacles waved in the still air as their transparent bodies arced across the short distance from shore to the sea, landing with a soft plop.

What had we (hopefully) saved? Well, our good friend Mr. Google turned up several frightening conclusions, an expert dive master said, “Eh, it’s a Sea Wasp.” Now, when you hear the word wasp, and combine that with ‘sea’ – you’re bound to think: PANIC! Well, further research and after careful retraction from said dive master, we think we may have just identified what our discovery was: a Sea Walnut! According to Discover Magazine’s blog, the sea walnut may look like a jellyfish, but it’s not exactly that. It belongs to a jelly-related group called the comb jellies (ctenophores). 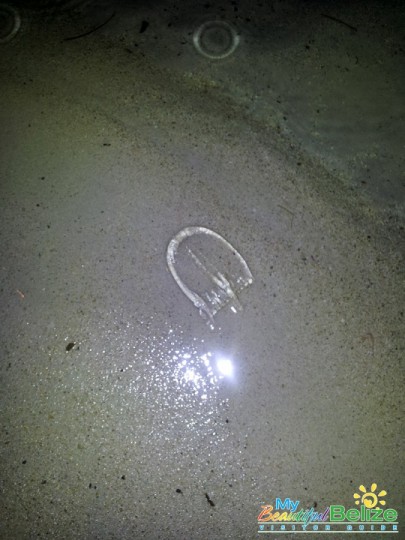 While it is a “simple, transparent blob” that is blind, has no brain and moves at an incredibly slow pace, (hmmm, sounds like some people I know…)  its feeding habits are a huge impact in the oceans. Using beating hairs called cilia it creates imperceptible water currents that brings its food directly into its mouth. Like a boss.

Unfortunately, like the ninja it is, it can also wreak havoc on the food web. After it was accidentally introduced to the Black Sea, its feeding habits – which can be twice the rate of fish – decimated the fish larvae and plankton population, sending the food chain into collapse. Dolphins and seal populations in the Black Sea, Caspian, Mediterranean and North Seas have begun to decline since their introduction. Bad sea walnut!

Native to western Atlantic coastal waters, including the Gulf of Mexico (and apparently the Caribbean Sea), the sea walnut is also known to provide lighting for underwater discos. Comb jellies get their name from rows of paddle-like hairs, called combs, and like tiny prisms, these hairs refract visible light into a pulsing rainbow – so really, it’s like a disco in the water! All in all, a walk on the beach can provide an insight into the Mnemiopsis leidyi – oh yes, that’s its scientific name. Our story would not be complete without at least sharing that with you! Next time you are on the beach, make sure you keep an eye out for these translucent creatures. At least you can now refer to them by name!

PS. No sea walnuts were harmed while writing this story.