Those of you that thought Amigos del Mar were merely masters of the sea, prepare yourselves for their latest addition: Jungle Tours. They can take you on just about every tour the Jewel has to offer. Among them are Cave Tubing, Zip Lining, Xunantunich Tour, The Belize Zoo, Lamanai Tour, Actun Tunichil Muknal (ATM) Caves, Crystal Cave Tubing, and ATV Tours; they even offer a Tikal Temple Tour in neighboring Guatemala.

We were lucky enough to be invited to a Caves Branch Branch Jungle tour recently and with thoughts of Zip Lining, Cliff rappelling and Cave Tubing, I was more than ecstatic to take up that offer.
Like most Amigo’s tours the Jungle Adventures start pretty early. In fact, my trip was scheduled to leave at 6:30AM from the Amigos Dock. We would be making our way from San Pedro Town to Belize City via the vessel “Another Princess.”

Once we arrived in Belize City, we maneuvered our way from the Caribbean Sea into the murky depths of the Belize River. Edgar Munguia, our very knowledgeable tour guide drove us along the river, briefing us on the rich mangrove ecosystem and the exotic wildlife that find a home in and along the river’s bank. Our first stop was at Manatee Watch, a tiny but conveniently located pit stop along the river’s bank where our shuttle awaited. After everyone was on board, we were ready to hit the Western highway to our destination: Caves Branch Jaguar Paw. 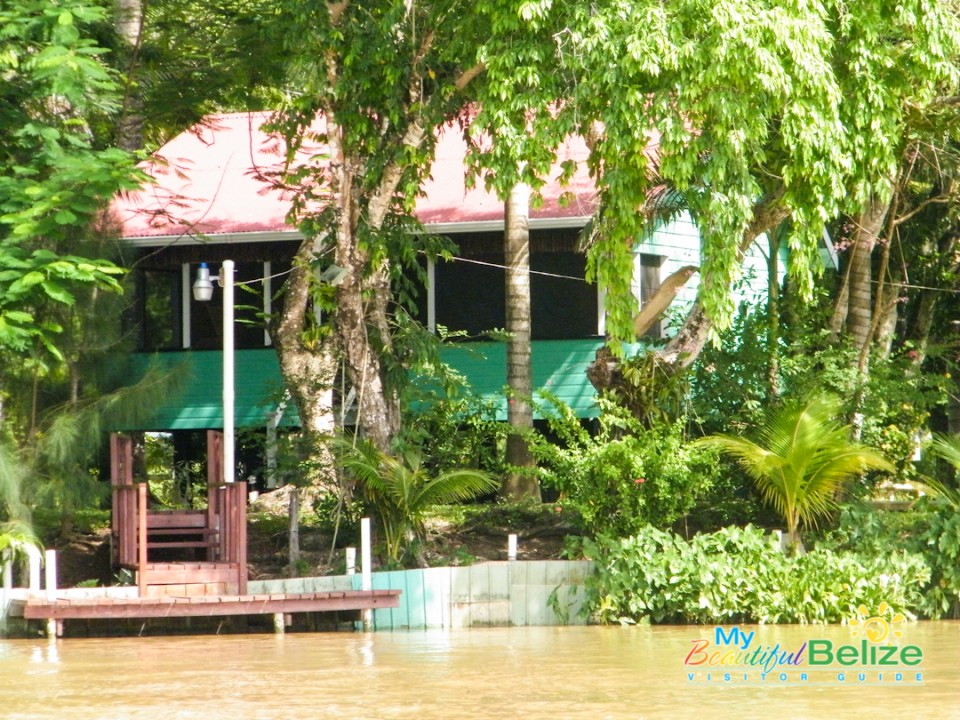 Our group of ten thrill seekers could not wait to tackle adventures the jungle had to offer. The first taste of said adventure was bumping along the winding dusty roads on route to the much the anticipated Jaguar Paw Eco Park. After the shuttle entered the gates of the eco- park to its designated parking slot, we hopped out , following Edgar into Chukka Tours’ main office. There we got the full run-down of the activities that lay ahead. We were up for a long day of hiking, zip-lining, rappelling and cave tubing, and boy was I thrilled! Before tagging along the trail, we sprayed on ample repellent-(which I would advise any jungle enthusiast to have plenty of) then made our way up the trail to the first zip- line (there are seven lines to try out). Prior to being harnessed to the lines, we got a briefing by the guides who showed us how it’s done right. Before we knew it, we were Tarzan and Jane (fully clothed of course!) flying through the lush jungle canopy, getting a bird’s eye view of the pristine land which has been preserved since the days of the Maya. 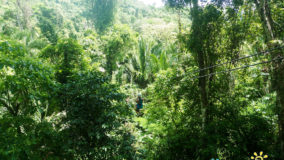 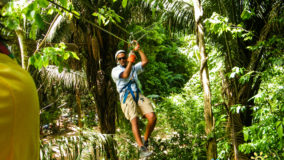 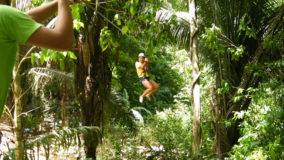 From that adventure we were on to the next. After the excitement of the zip lines, it was time to fall! Yes, I said it…FALL. A 45 minute hike led us up to the ledge we would be rappelling. Now, I must admit the hike up certainly did do its part in burning off a bit of energy (along with a couple extra calories I had lying around.) The drop down however, promised to re fuel one with nothing but pure crisp, clean adrenaline. I found myself harnessed to a line. My life was literally hanging by a thread, well….rope. As I was instructed on what part of the harness I was to grip and when I actually was to grip it, I looked beneath me, feet dangling in mid air, at the rocks and river bank that waited below. At this point, boy was I grateful for the expertise of these guides. With a loud yelp from the breaker (the guide on the ground that would catch us) that signaled he was ready, I was let loose. Free falling the equivalent of about 20 stories down, every ounce of my body that once filled with nervous butterflies was now totally consumed by the thrill of the moment…this was the ultimate adrenaline rush! The most amazing part of this particular adventure had to be that this was not done in an artificial setting, with artificial rocks and fake walls. This was 100% the real deal…the absolute glory of what Mother Nature has to offer! One after the next, the ten of us stepped off the ledge, to what had to be the one of the most exhilarating (and loudest) experiences conquered thus far. 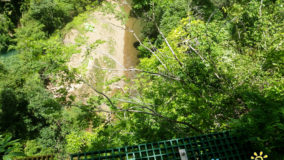 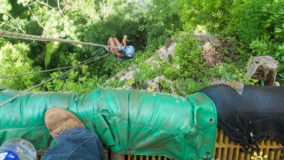 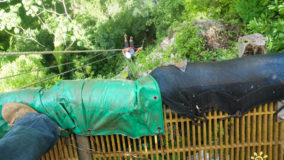 After being completely taken away by the rappelling, Edgar led us into the cool waters of the river that was less than a minute away. We thought it couldn’t get any better, after the zip lining and cliff rappelling, but it did.We splashed through water with inner tubes on our backs, to the mouth of Xibalba (Pronounced: shi-bal-ba). To the Maya that once inhabited these ancient grounds, caves were believed to be the entrance to “Xibalba,” the Maya hell. It was believed that all souls, after death came to Xibalba and in order to be re-born had to overcome the different challenges that awaited them in this “place of fright.” Inner tubes connected, we made our way into the mouth of the eerie cave, currents leading us into the heart of what to the Maya was “hell” itself. It was pitch dark, and silent, the only light of course, came from our headlights, which illuminated just bright enough to see the incredible stalactite and stalagmite formations and the tremendous caverns of this sacred cave. 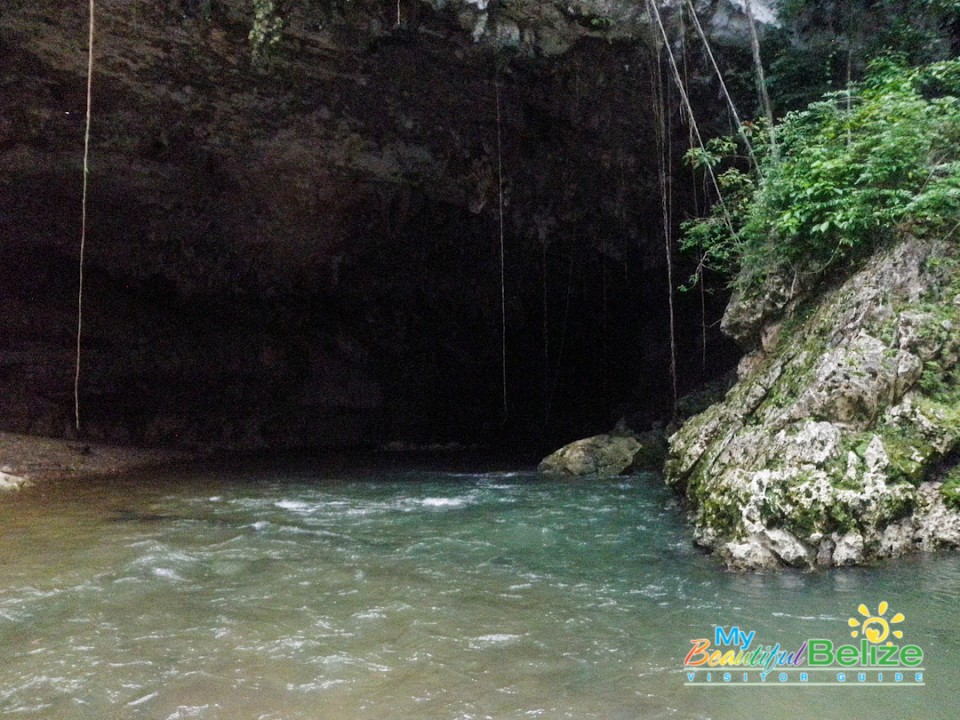 The cave measured from depths of about 3 feet and up to 60 feet in one particular area. Drifting further and further into the caverns of Xibalba, the roaring of tiny falls echoed loudly, fresh water dripping from the incredible formations above. The sights and frights of Xiblaba was more than enough to deem this wondrous cave trail an absolute phenomenon. 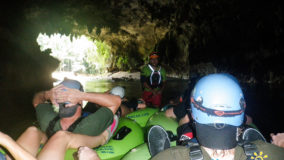 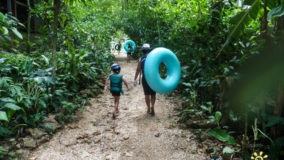 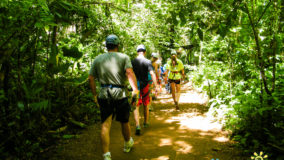 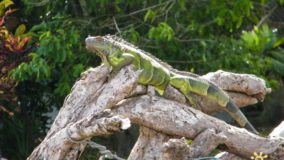 By the end of the three part jungle escapade, we were more than ready to fuel up on yet another one of Belize’s best feature, food! What exactly was bubblin’ in the pots for us you may ask? Good ol’ Rice and Beans, and stewed chicken with sides of plantain and coleslaw, with your choice of beverage of course. The food was simply magnifique! Our taste buds definitely send compliments to the chef! The delicious medley of authentic Belizean flavors was the perfect match for an Un-Belizeable jungle adventure!

Take a stroll on up to the dive shop located on the beach in town (in front of Cholo’s Sports Bar). You won’t be disappointed!