The Adventure of Tenuk, a ‘Belizean-ized’ book for Belizean children

I sat in the confines of work’s washroom, as I usually would do sometimes during lunch, and decided to browse through this new book that is drawing attention to an animal that we learned so much about in school, when I was somewhere between 5 and 10 years old. Like many adults, I still enjoy reading children’s stories; and I especially love to look at pictures (It’s the kid in me). So, as soon as I was given a copy of the book, I retreated to my four-walled comfort, at least for a while. The anticipation of what would happen next kept me reading on and on. And, before I knew it, it was over! In just 5 minutes, I had read cover to cover. I was disappointed – not in the book – but in how quickly I was able to finish it. Then I realized I was being selfish. After all, the book is for children, not adults. And, as any trained educator will tell you, a child’s attention span is very short, so we must keep them interested and motivated for them to stay focused and learn. 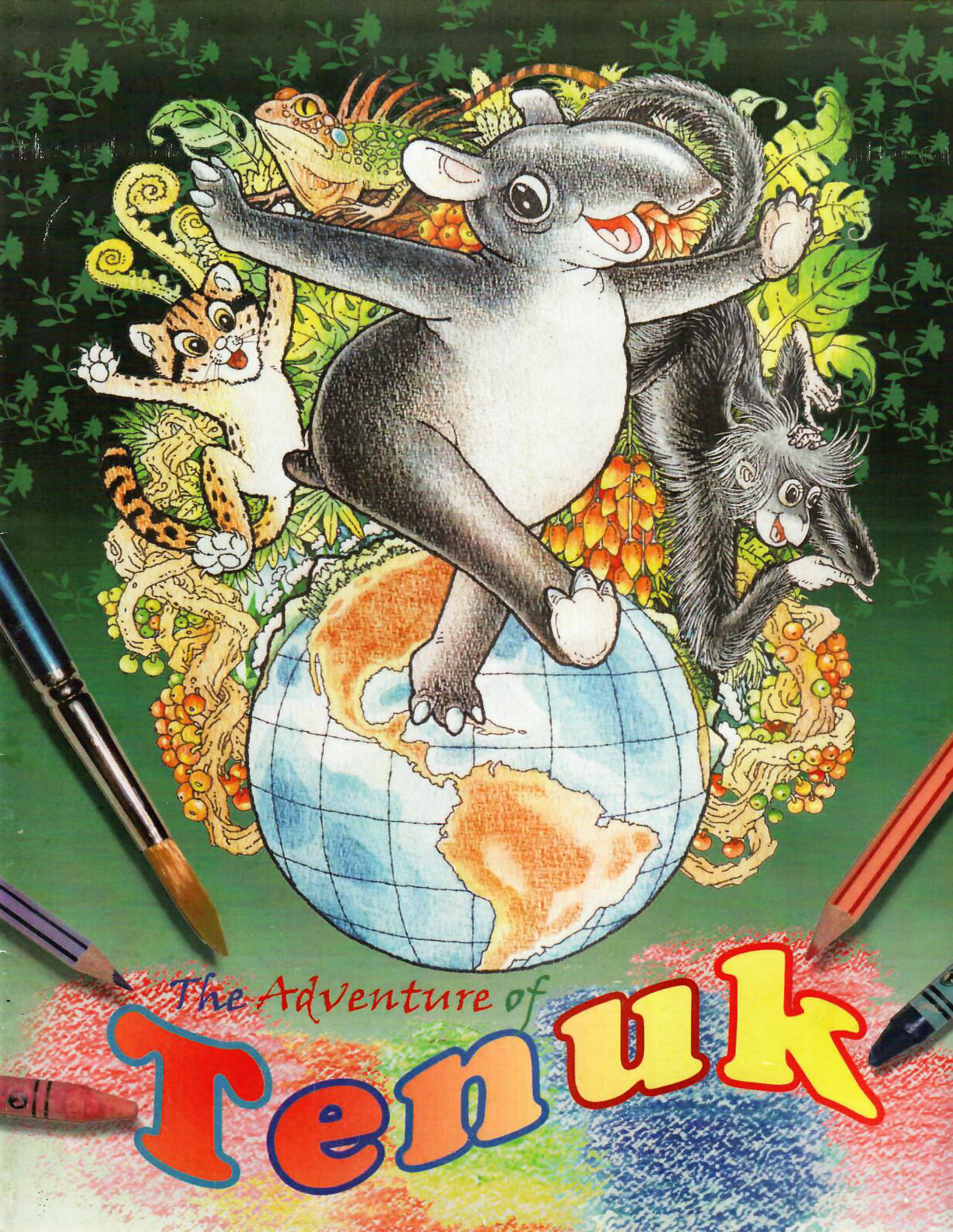 The story book The Adventure of Tenuk duplicates as a colouring book. It has an attractive bright-coloured cover with brilliant, accurate, and compelling illustrations, while the inside pages are black and white. This combination is sure to grab and keep the attention of any child between the ages of 6 and 9 years, whether they are avid readers, or whether they prefer the story being read to them by their teacher, parent, aunt or older sibling. Even adults will relish, as I did, in the narrative. And, especially for those children who live in rural areas, the characters in the book are relatable. 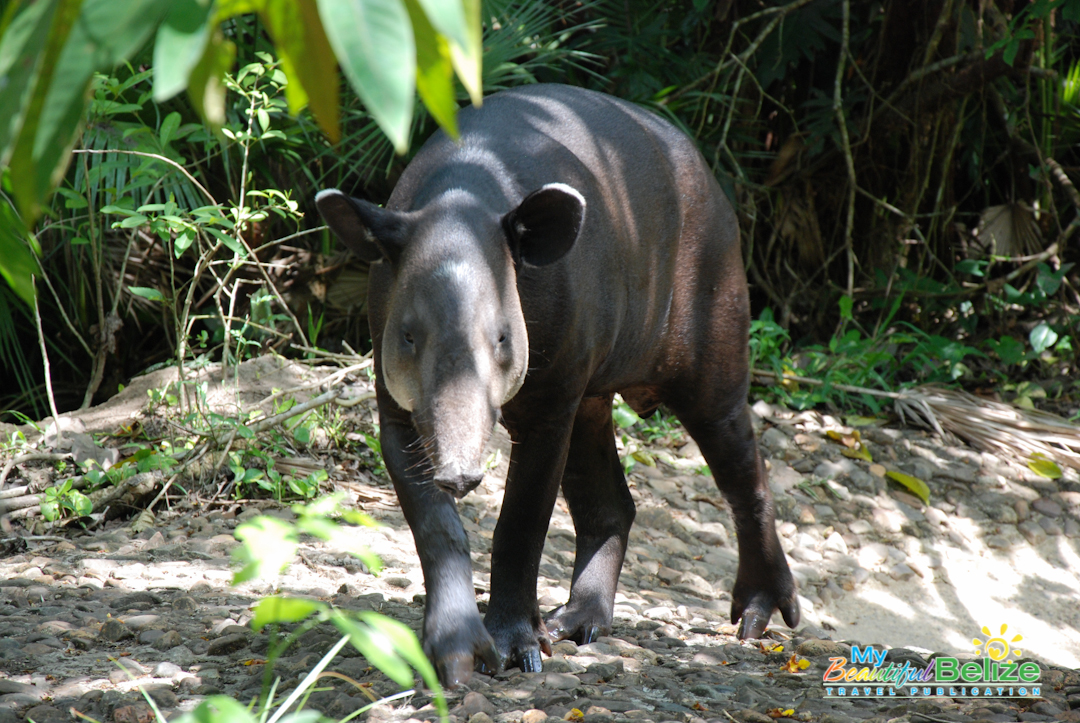 Tenuk is a Malaysian word that means Tapir. They are large mammals that resemble an anteater and a wild boar. And while they are usually scorned, they can be remarkable animals. There are about five different types of tapirs; and Belize is home to the Baird’s species. They eat leaves, shoots, fruits and aquatic plants; and despite its large size, it sometimes can fall prey to wild cats like jaguars and reptiles such as crocodiles. However, human beings are the tapir’s biggest threat. Scientists estimate that there are only about 5,000 Baird’s Tapir left in Central America, which makes them endangered, according to the official classification of the International Union for Conservation of Nature (IUCN). This means that the animal is facing a very high risk of extinction in the wild in the near future. For the most part, a species becomes endangered because of habitat loss or destruction of their homes, many times due to human activities. 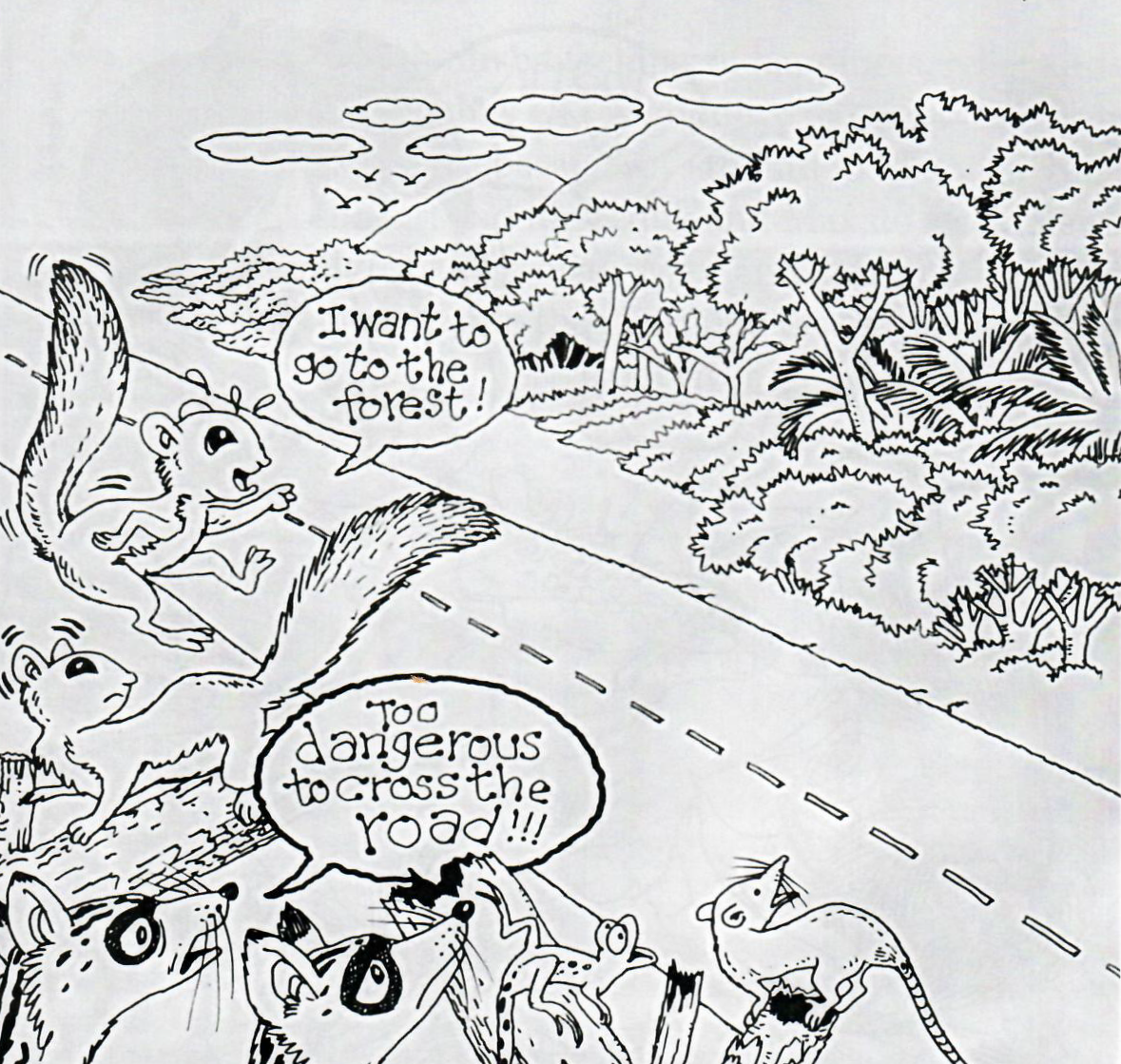 The book’s author is Lee McLoughlin, who has been working in wildlife conservation in Belize for the last eight years. Originally from the United Kingdom, McLoughlin now calls Belize his home. He recalls that from the tender age of four he was always fascinated about watching wildlife documentaries on television. “Before I could even communicate really well, I was looking at the lions, tigers and giraffes on TV, and I was fascinated by that,” he declared.

He explained that the idea to write about Belize’s national animal came to him about three years ago, while he worked at the Ya’axche Conservation Trust, YCT. During this time, he says tapirs were being hunted and killed, which was threatening their population. Surveys, conducted in southern rural villages revealed that tapirs were being shot because they were raiding farmers’ crops. “And I thought to myself, how can we deal with this; how can we stop this from happening? And we thought about what kind of techniques farmers can use to protect their crops. It was just to build up the tapir as a symbol of national pride,” McLoughlin emphasized. Because, truthfully, there are ways in which human beings can live alongside wildlife. “We just have to think about the ways in which we can do that,” he continued.

The initial idea was to have a book that children on two sides of the world could use – in English here in Belize; and in the Bahasa language in Indonesia and Malaysia. You might not know that Malaysia and Belize are home to different species of the tapir. 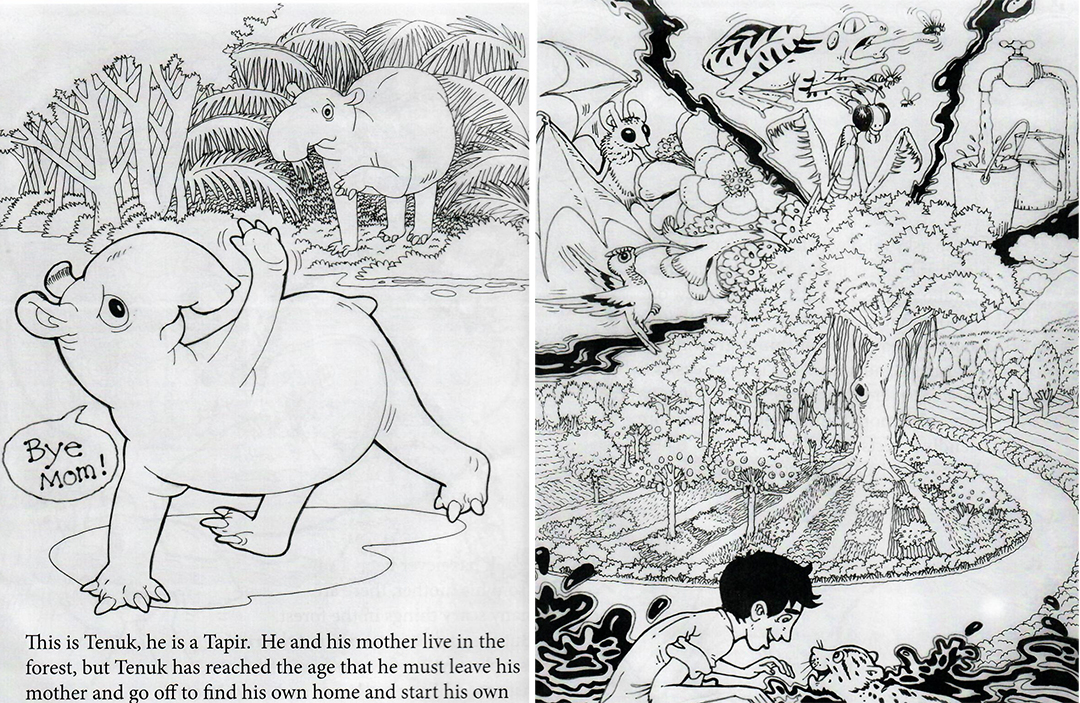 While the main character of this book is the tapir, there are also other animal characters.
McLoughlin, who describes himself as a conservationist, acknowledges that the paperback was “created as something that could be used by teachers so they could build a conversation or interest in kids to ask questions” about these species. Additionally, McLoughlin believes that teachers could also develop an activity or ask the kids what they know about the animals, particularly since many of them may have negative influences and perceptions. On its own, conservation can be boring or too technical for both adults and children; one of the main reasons McLoughlin says he wanted to “simplify complicated stories and theories to a level which could be understood by everyone” Also, the idea was for “us to be able to add to the story in whatever language we wanted.” 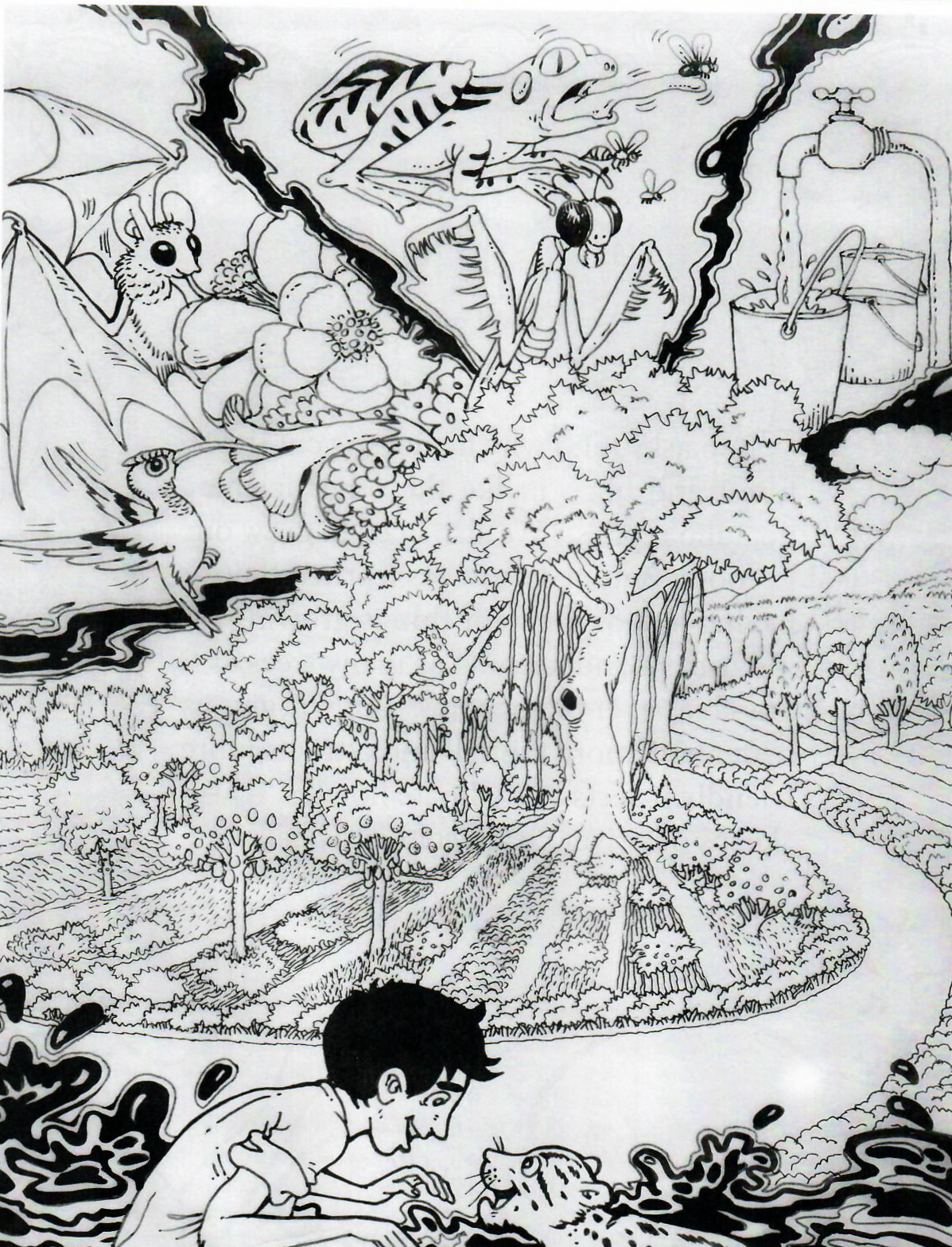 The main theme conveyed in the colouring-story book is co-existence between animal and humans. But another important theme is connected forests. When there is a large gap between two patches of forest, it can be frightening for an animal to cross between. McLoughlin hopes that “The Adventure of Tenuk” will allow readers to be able to perceive life through the eyes of the animal characters, thus recognize some of the threats they are confronting and reflect on what we can do to reduce those dangers.
According to the last census conducted in Belize, there are approximately 45,000 children between the ages of 5 and 9 years old, which is the largest demographic. McLoughlin is trying to secure funding to reach 10% of these – 4500 books! However, to do this he needs the assistance of the public. Thus, he has started a Kickstarter crowdfunding campaign to raise funds to pay for reprints that will be distributed for free to children especially in rural areas first, “where getting printed materials can sometimes be more difficult,” he explained.

Anyone interested in purchasing a copy or copies of “The Adventure of Tenuk” may contact Lee McLoughlin at the Wildlife Conservation Society at 1755 Coney Drive, Second Floor; call 501-601-4229; or email [email protected]

About the Wildlife Conservation Society
The WCS’ goal in Belize is to support wildlife and wild places through the maintenance of forest cover, the promotion of legal protection, and the sustainable use of forest resources, while recognizing the need for economic development in local communities. We focus on forest cover assessments and key threatened species – the jaguar, white-lipped peccary, scarlet macaw, and howler monkey – that act as indicators of forest health. Highlighting key species also increase public awareness and interest, which builds political support for protection. WCS recognizes that well-managed forests are essential to the survival of wildlife, the maintenance of water supply, and the quality and health of the Belize Barrier Reef, a recognized World Heritage Site.
Visit us online at:
Website: https://belize.wcs.org;
Facebook: https://www.facebook.com/WCSBelize/
Twitter: https://twitter.com/WCSBelize/followers;
and Instagram: https://www.instagram.com/wcsbelize