One of the first things I was told when planning my trip to Toledo was “Be sure to go to the waterfalls!”
Of course, Toledo District is much more than just waterfalls, but that is one of their many attractions. Besides its people and picturesque villages, archaeological sites and mountainous region, Toledo has caves, waterfalls and tons more to explore.
Naturally, like an obedient girl, I ensured my trip included a dip or two in the cool clear waters of some falls! 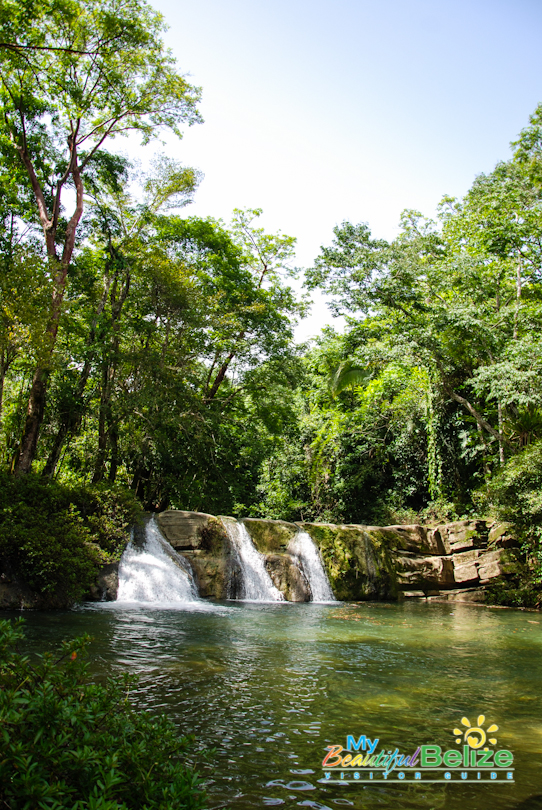 A short drive outside of San Antonio Village, my companions and I pulled up to the roadside where we could see a track/trail leading to some shrubbery below. We could hear splashing and a dull rushing sound, which could only mean one thing: waterfalls! 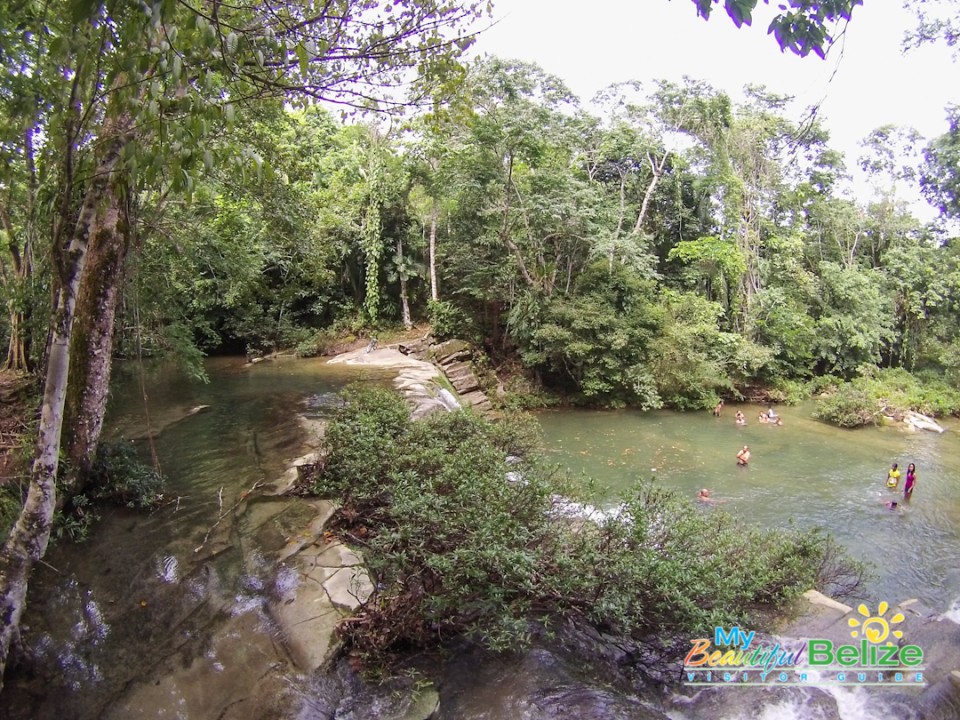 Sure enough, we carefully walked down and through the clearing, could see the spray of cold river water spilling over rocks to blue pools below. The water was oh-so-cold! No 85°F salt water there – it was the real deal icy cold water of the rivers that run through forests. 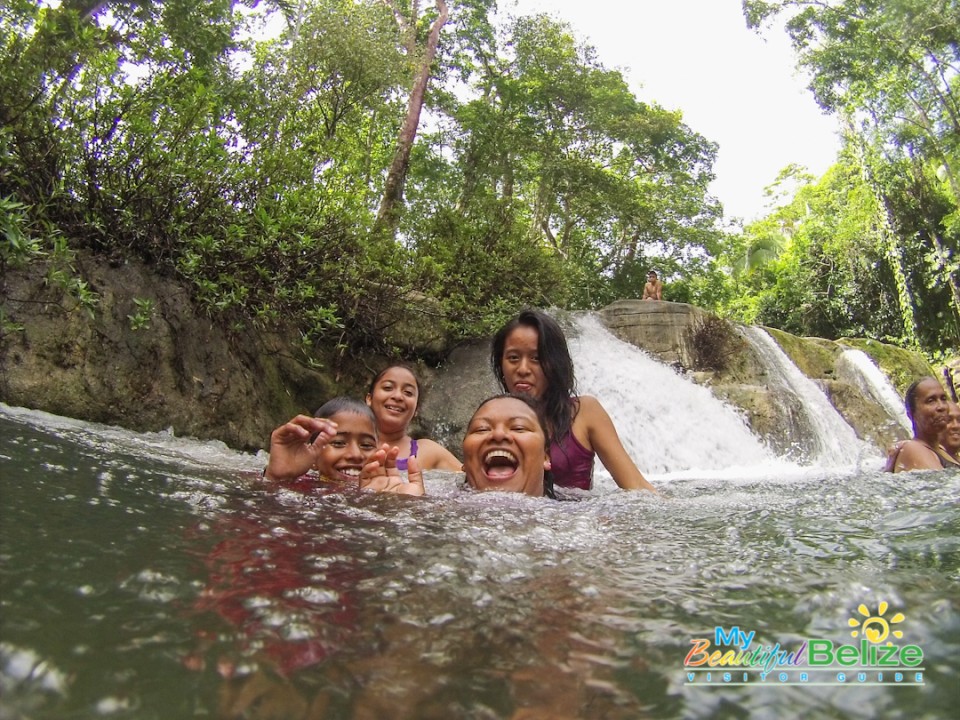 We had an 11 year old daredevil with us who had no fear of clambering up the falls – gripping onto rocks and dirt with hands and bare feet – then jumping off! (I stayed in the pools below, teeth chattering as my body adjusted to the temperature).

When more people started arriving, we head out to the ‘bigger’ one. 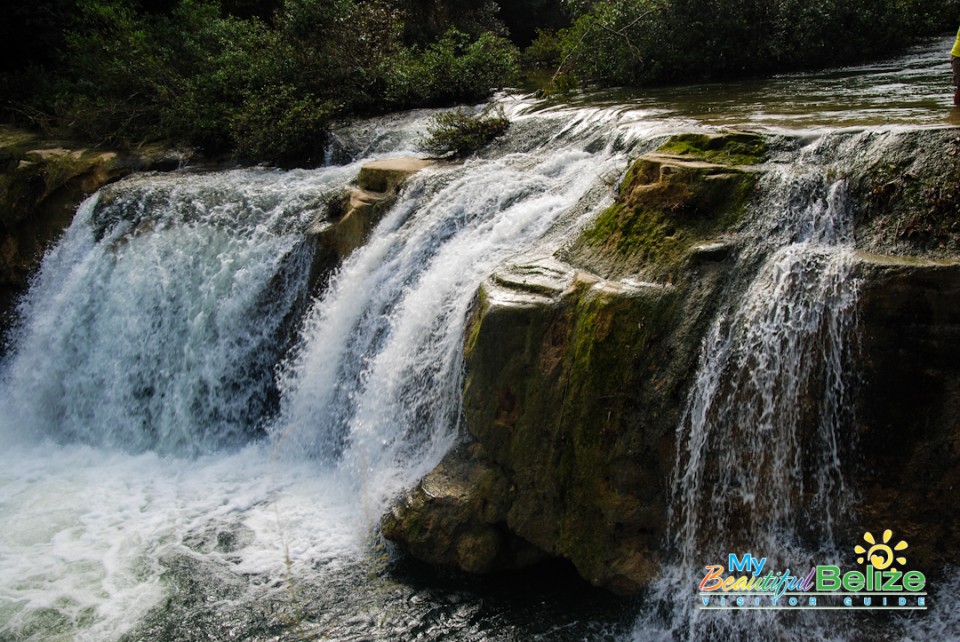 As Belizeans, we paid $2 each to access the falls, then headed out to the trail. Trees grew tall on either side, still not muffling the roar that grew louder as we drew closer to the falls. Yep, this one would be bigger!

A few hundred yards into the mountainside and down some man-made steps, and we were facing the big one indeed! Heck, the water was roaring down so hard to the pools below that it sent back mist. 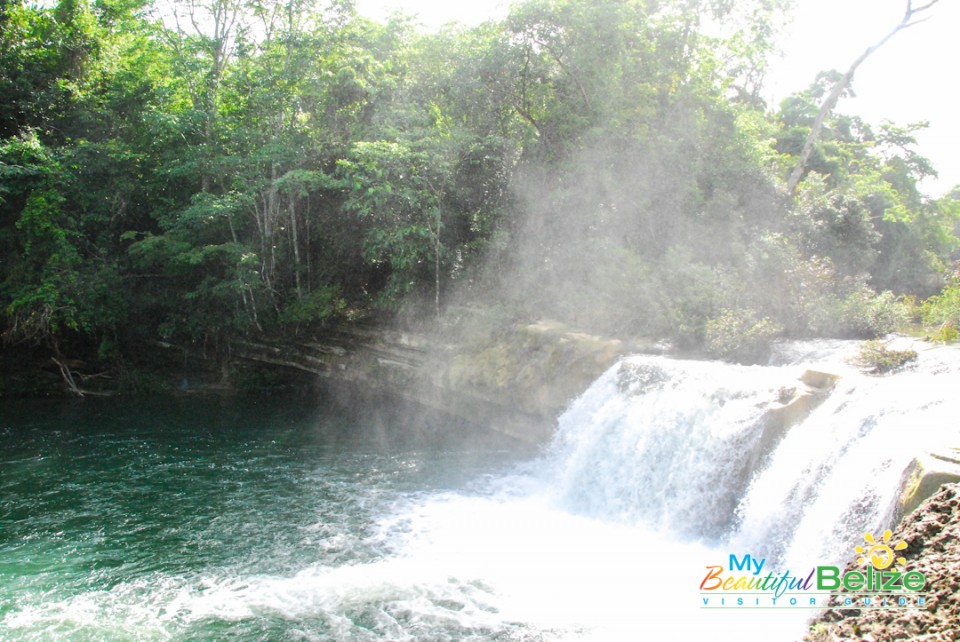 Water ran down from smaller rocks, forming pools for swimming above the falls themselves, and below, the blue-green deep waters beckoned as well. 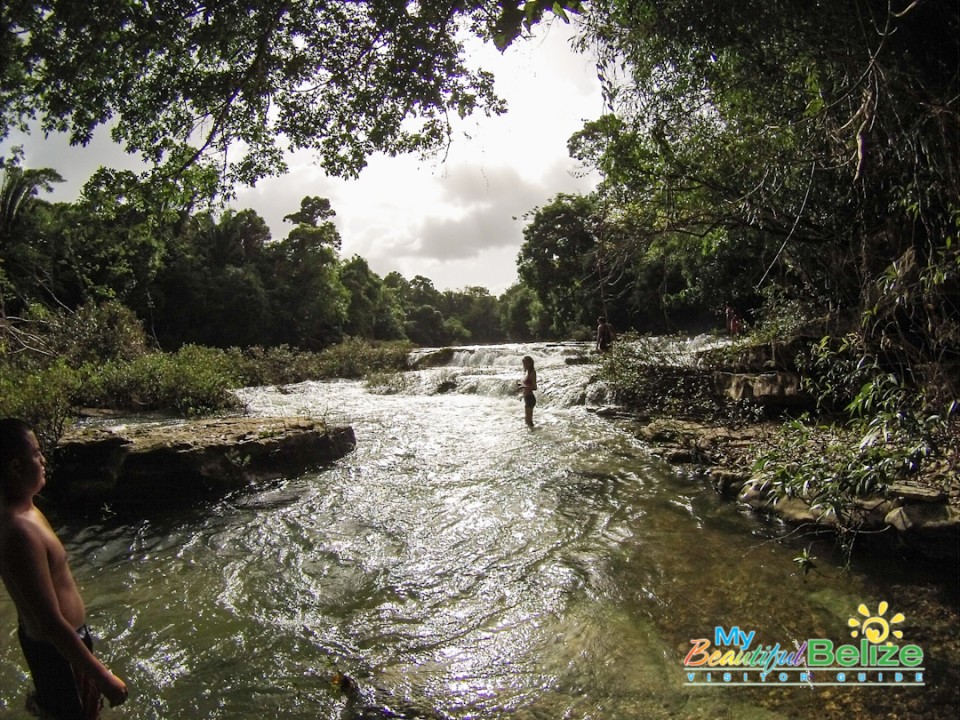 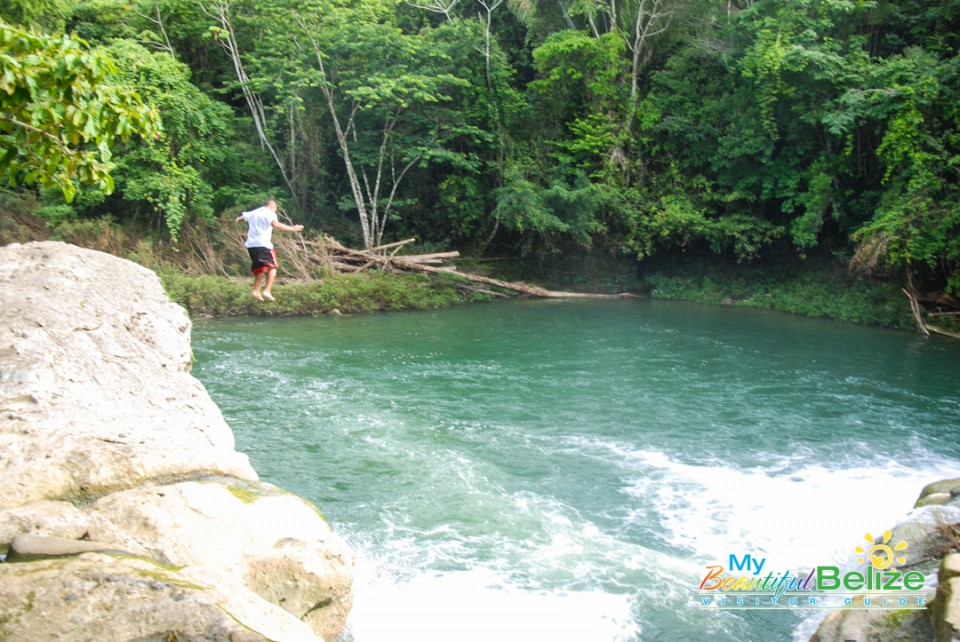 My daring driver decided to take the plunge! (I was too chicken to follow) 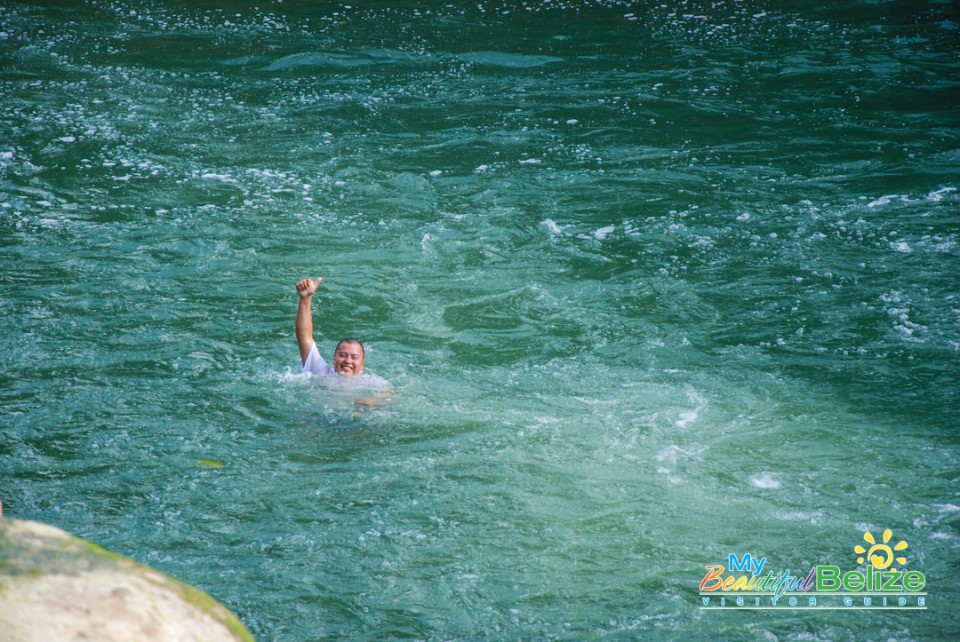 We spent the rest of our afternoon frolicking happily while the sun beat down on us. 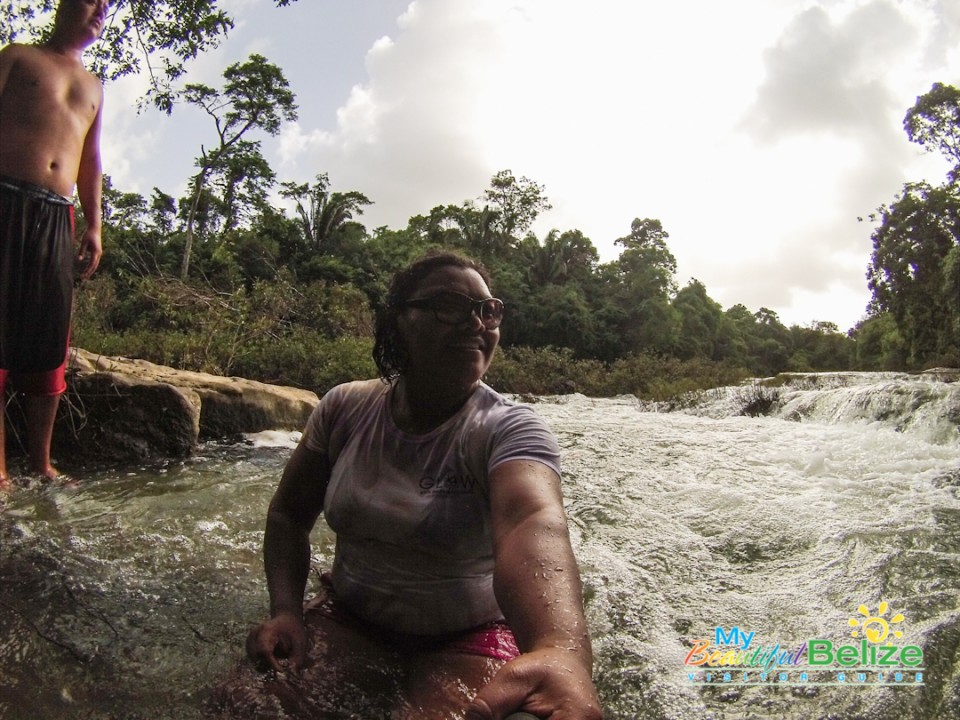 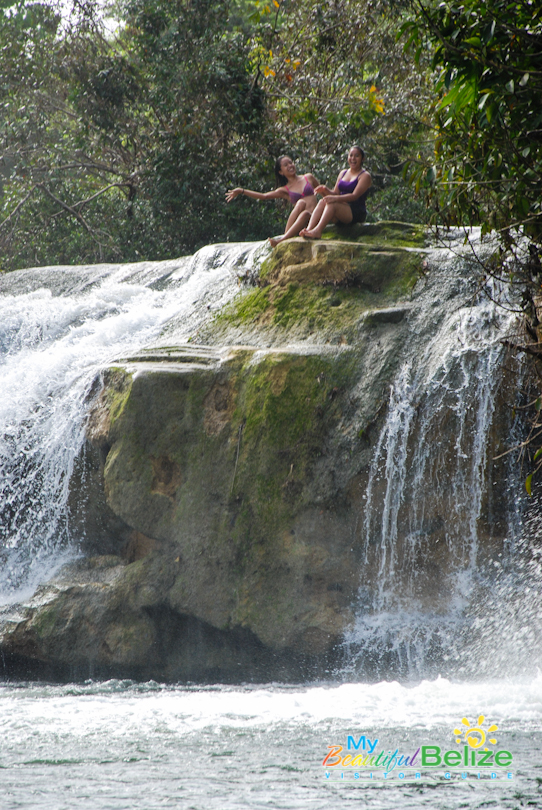 There are countless other waterfalls to explore throughout the district, and we’ll get there eventually. But for now, we’re happy to have seen two magnificent ones!