“…sometimes you can hear it, like someone is hauling a long, long chain along the streets.”

In Belizean villages such as San Jose Succotz, the Cadejo is described as a hairy, goat-like animal or a large, shaggy dog, hence its name, which translates from the Spanish as “tangled hair”. The Cadejo is said to have the hooves of a goat, the horns of a bull, and the tail of a puma or lion, and its flaming eyes and foaming mouth give it an aura of evil. Stories of the Cadejo are told among the Maya in Belizean villages, and also in Guatemala. 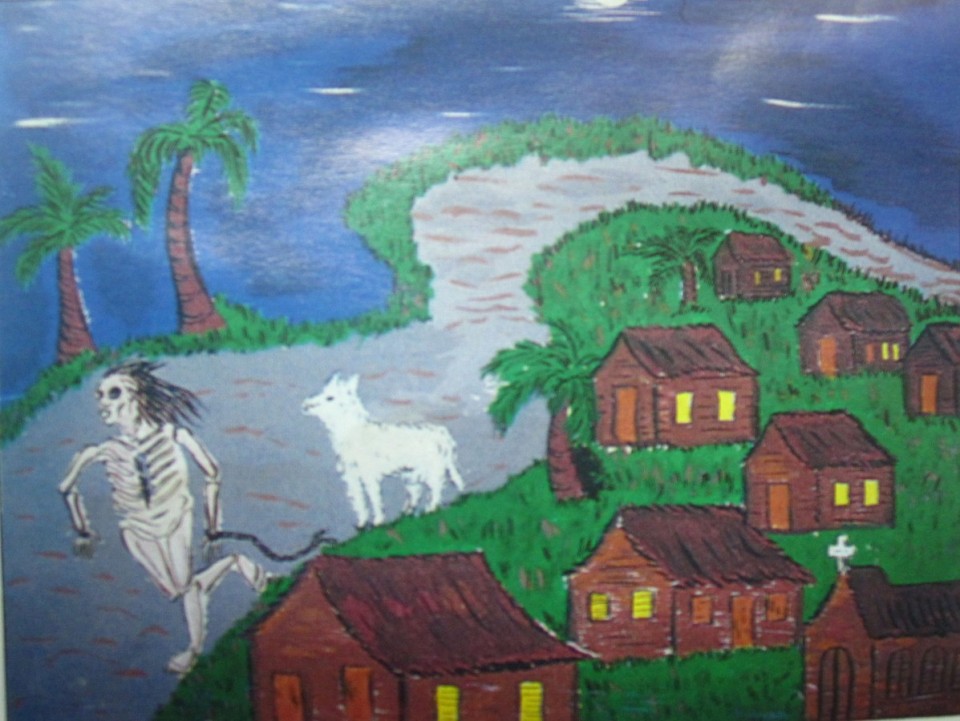 The Cadejo may appear as a white animal, protecting drunken men who have lost their way in the jungle. Most often, however, it appears as a black animal, seeking out habitual drunkards who have fallen in the streets. The Cadejo hungrily licks their mouths and follows them for nine days until there is no longer a chance that they will get well.

Some residents of San Jose Succotz tell that the Cadejo appears as a human skeleton pulling a chain. It passes through villages at night and the haunting clatter as it approaches instills terror in all people. Legend has it that when the rattling sounds nearby, the Cadejo is, in fact, far away so you need not worry; the time for concern is when the rattling seems distant, for then the Cadejo may be close enough to reach out and touch you. Those that see the spirit become so horrified that they are paralyzed with fear and become stricken with a high fever, which can be cured only by a curandero or bush doctor.

Some workers on a farm recall an incident involving one of the farm’s new managers, who, on arriving at the farm, had asked to be given the room that overlooked the large pasture. He was told that this was the room in which one of the past owners of the farm had died and that anyone who slept there since had seen the Cadejo at night. The workers then proceeded to describe the goat-like animal to the manager, who had never heard of the Cadejo. The young manager disregarded the workers’ talk as superstition and insisted on staying in the room.

That first night, the manager was sitting in bed reading when he heard the sound of something heavy being dragged across the floor. He tried to ignore it, but the noise grew louder and he decided to investigate. He reached under the pillow to get his gun, and, when he turned around, a savage animal was standing in the doorway, its eyes glowing and its mouth frothing. Unable to control himself, the manager screamed in terror. The farm’s workers then came running to his room, and he told them of seeing the Cadejo, although he could not remember what happened after he screamed. When the manager had finished his story, one of the workers, who had been looking out the window, pointed to a white mass moving stealthily across the pasture.

The Cadejo is said to have an aversion for crosses, and making the sign of the cross with the left hand or carrying a dagger in the shape of a cross can drive the animal away. It is said, however, that once you have seen the Cadejo, it plagues you forever, becoming as attached to your being as your own thoughts are.