Coconuts – the heart of Caribbean cuisine and culture

How can you conjure up an image of a tropical paradise without including the quintessential coconut tree? Graciously lining white sandy beaches, the swaying sentinels stand tall, armed with clusters of green or yellow coconuts while casting fronds of shade below them. Although the coconut palm is a gorgeous testimony to tropical adaptation, with its leaves designed to endure brutal winds and its long, thin trunk pliable enough to bend with the breeze, it is its fruit that is truly remarkable.

The coconut is considered a tropical drift seed, designed to survive for months, even years at sea.They are very buoyant and their thick, protective shells are impervious to salt water. During their long voyages they can cross entire oceans, perhaps colonizing the shores of a coral atoll or isolated volcanic island. Sea dispersal is a hit-or-miss method; after a long, perilous journey, other dangers await the vulnerable seedlings. They may perish in the parched sand without adequate moisture or be quickly devoured by ravenous land crabs. But when they are successful in finding a place to plant their roots, the results are beaches lined with custodial coconut trees that help sand from eroding while providing habitat for many shore critters. 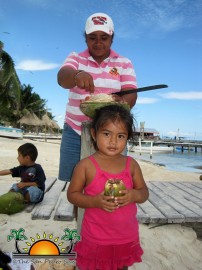 Found throughout the tropics and sub-tropic areas, the coconut is known for its great versatility, and has been cultivated and harvested for centuries. Coconuts are different from other fruits because they contain a large quantity of “water” which is not only nutritious but delicious, and when immature the tender pudding-like insides are devoured like candy.When mature they still contain some water and can be used as seednuts or processed to give oil from the kernel, charcoal from the hard shell and the fibrous husk can be used for making products such as floor mats, brushes and mattress. The oil and milk derived from it are commonly used in cooking and frying and coconut oil is also widely used in soaps and cosmetics.

Like other Caribbean countries, the coconut culture lies deep within our culinary customs. From rice or Johnnycakes subtly laced with coconut milk to super sweet cocobrut candy, Belizean, Creole/Kriol and Garifuna cuisine often incorporates this tropical mainstay. Beginning with coconut water, we were drinking this lightly sweet nectar long before anyone knew of its vast health benefits. Now the latest health craze, coconut water is considered Mother Nature’s ultimate sport drink.Low in calories, naturally free of fat and cholesterol, with more potassium than four bananas and super hydrating – these are just a few of the many health benefits coconut water possesses. Coconut water also has less sugar than many sports drinks and much less sugar than sodas and some fruit juices. 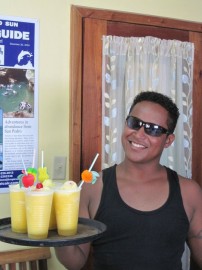 A long, cool drink of coconut water is amazingly refreshing, and when you add some of your favorite liquor and some mint, well you have the notorious Coco Loco! The epitome of a tropical cocktail, this drink is often served with the green coconut simply sliced open on top with a splash of rum and ground mint added to the tasty water. Add a long straw and a paper umbrella and you are living the high life like Thurston and Lovey Howell from Gilligan’s Island! Coconut rum is another island favorite; served with pineapple juice. This cocktail is a simply an unpretentious piña colada, better known as a “panty rippa” here on La Isla!

There are endless ways to enjoy this sweet, nutty fruit and some of the best are in our baked goods.Muffin sized coconut tarts, empanada style ‘crusts’ stuffed with shredded coconut and creamy pies are just a few ways to enjoy this tropical fruit. On a savory note, coconut is often married with curry and dishes such a coconut curry, served with lobster, fish or chicken are spicy and sweet. As a crunchy, sweet and salty breading, it is delicious on shrimp! Garifuna recipes incorporate coconut into their traditional hudut which is a fish and coconut milk stew with mashed plantains and their coconut fish sere is a rich and flavorful fish soup.

Although considered a nut, the coco ‘nut’ is really a fruit. Regardless of what it’s called people either seem to love it….or not. If you love it you are in for a tasty treat while visiting La Isla and the varieties to choose from are endless. Some of my personal favorites? Coconut curry snapper at Caliente Restaurant, the crispy coconut shrimp appetizer at Blue Water Grill, coconut tarts available at most bakeries and some street vendors, coconut cream mojitos at El Secreto and of course a yummy Panty Rippa, shaken, not stirred! 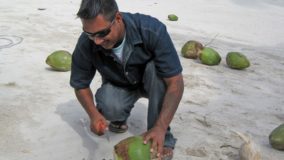 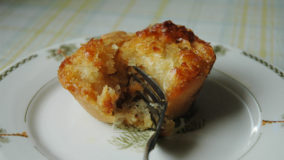 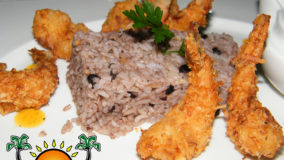 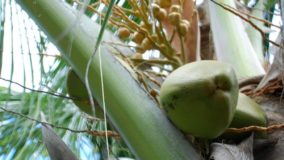