Belizean Culture, The Maya of Belize, Tours and Activities

Getting out of bed early is not something I willingly do, but when our friends at Amigo’s Jungle Tours offered to take me on their inaugural trip to Caracol Archaeological Site, all I could say was“hell yes!” Who could say no to an all-day adventurous trip from the tropical Caribbean Sea to Belize’s lush rainforest? Let’s not forget, Caracol has been on my bucket-list of travels and when opportunity comes knocking, I answer! 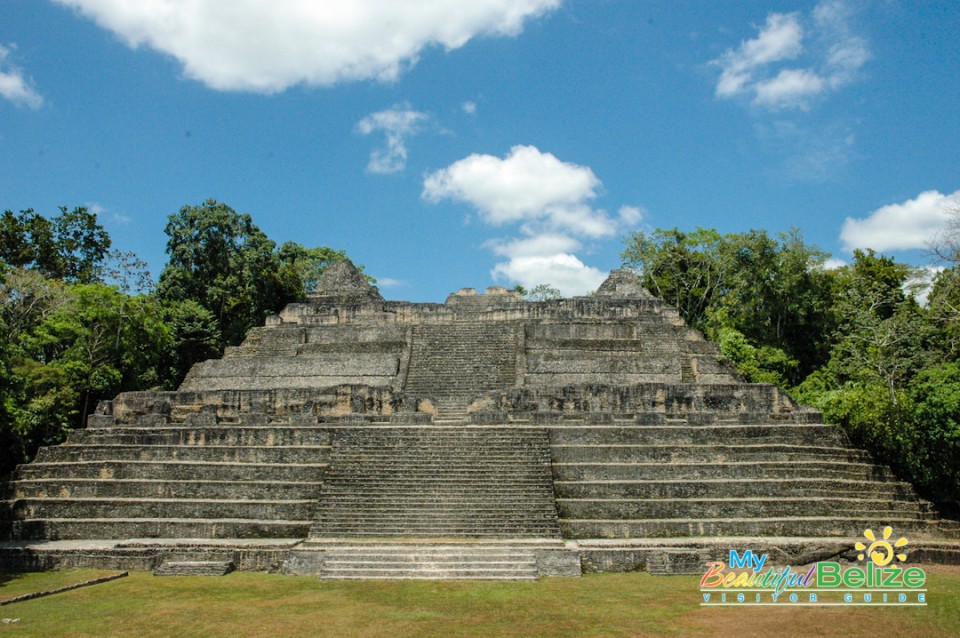 The boat ride from Ambergris Caye to Belize City early in the morning brings its own charm and beauty. Even the sleepiest of eyes can appreciate a colorful sunrise as the sun breaks across the reef.With beautiful sights and a smooth ride, an hour passed without us even realizing, and soon the old capital Belize City, lay ahead. We stepped off the boat and into the comfortable van tasked to carry us deep into the jungle. Fully equipped with AC, sound system, ample space and seating, comfort was no issue on this trip. The van was turned westward, headed to the lush green district of Cayo where a beautiful rainforest and stunning archeological sites awaited us eager explorers. 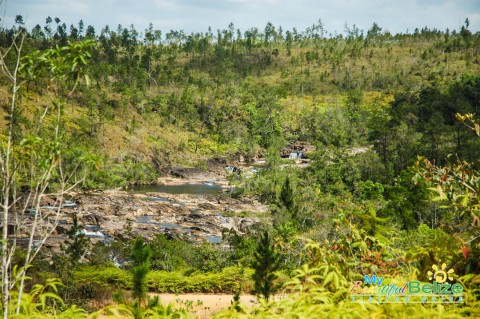 An hour and half drive later, we entered the junction at Santa Elena Town via the George Price Highway, taking us through several Maya communities along the dirt road that leads to Mountain Pine Ridge. Naturally created rivers, mountains and even natural waterfalls and pools along the way added to the excitement, as our driver made occasional stops to point out the scenic views to us.
Time passed quickly, and we were soon deep within Belize’s rainforest in the Maya Mountains, nestled within the Chiquibul National Park. Rising high into skies, in the middle of the thick vegetation of the Maya Mountains is Caracol–the largest archeological site in Belize. She is quite the beauty!
Deigo Cruz, our guide for the day, walked us through the rich history of what once was a powerful Maya City. Caracol’s ancient Mayan name was once Uxwitza which means “Three Water Hill but in the Early Classic period, it was renamed to UxWitzAjaw, or “Three Hills Lord.” Later, after modern day archaeologists began uncovering the remains of city in the late 1930’s, they gave the site the name Caracol. Spanish for snail, Caracol was chosen because of the winding road leading to the site, and the discovery of two workstations at one of the structures, El Barrio (The Neighborhood), that were used to crush snail shells. Most of the crushed shells were mixed with clay to make pottery – a unique discovery to Caracol during the excavation process. 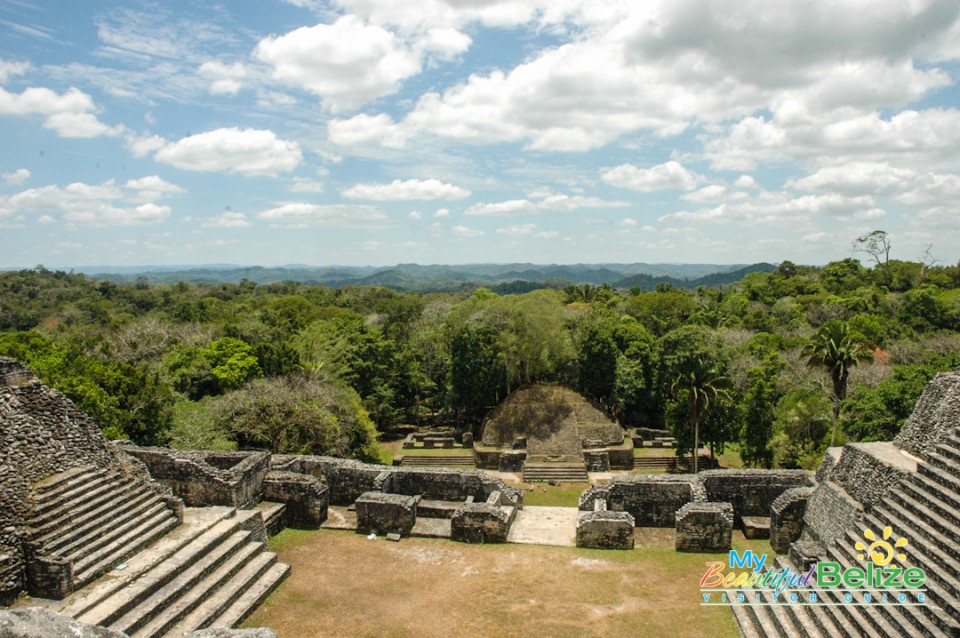 Distinctive and elaborate carvings at the 16 altars and 11 stelae that are on display make Caracol different from many other ruins in the Mundo Maya region. In fact, our tour guide pointed to evidence that suggests that at one point, part of the architecture on one structure suggest the influence of the Yucatec Maya, after a queen married one of the rulers at Caracol. That explains why part of a structure at Caracol has a slightly different, steep layer, similar to those found on ruins in southern Mexico.
As we walked through the thick canopy from one structure to another, Diego pointed out several species of trees throughout the paths including two huge Cieba trees growing next to each other. A short walk from El Barrio brings us to the main pyramid called Caana (sky palace). Caana is a massive pyramid that stands high into the skies, housing four palaces and three temples, and is the tallest building in modern Belize. 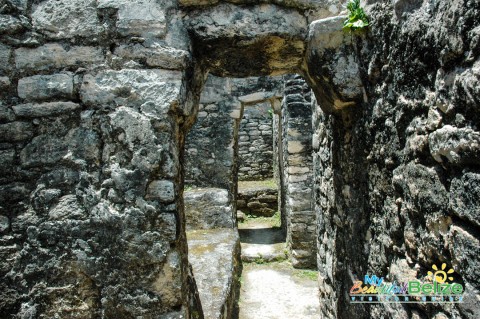 At its base, it is hard to appreciate its full majesty, so it was a no-brainer that we should climb and discover for ourselves the 141-feet high structure. We invaded the privacy of past Maya rulers as we wandered into their living quarters, some even daring to sit on their concrete beds. At the foot of the top western temple at Caana, are two empty tombs opened for visitors to tour. Our guide explained that they once held the remains of two important rulers that reigned over Caracol. It was a sobering experience walking through those hallowed tombs indeed. We eventually made it to the very top of Caana where the 360 degree panoramic view of the lower structures and the dense forest and mountains in the background stole our breaths away (as if we weren’t already gasping from the climb). The stunning view is testament to the impressive power of the rulers that once dominated a city of about 180,000 at its peak (around 650AD).
Surprisingly, the impressive structures that have been excavated are just a small part of Caracol. This small portion entails the central core that includes three plaza groups, the central acropolis, two ball courts, Caana, several smaller structures and a visitors’ center. Deigo explained that apart from Caana, there are a total of 24 stelae, 24 altars, reservoirs used as water supply for the city, causeways, five plazas, an astronomic observatory, several ball courts and over 35,000 known buildings and more than 100 tombs mostly still covered by vegetation. That news is certainly awe-inspiring and our remaining tour is filled with a sense of wonder at the Maya.
Our two-hour tour of Caracol ends with a walkthrough of several thatch huts with stick beds, a replica of a traditional Maya dwelling. Under the last thatch are several stelae that were unearthed and found to have historical information that helps us understand a bit about the Maya that occupied Caracol during 1200 BC to 1050 AD.
While we absorb this information, the chirps and calls of birds overhead join the chorus of howls from the troops of howler monkeys in the surrounding trees. A quick peek shows us curious faces peeping at us from the tall trees; the monkeys were probably wondering what shenanigans we were up to. 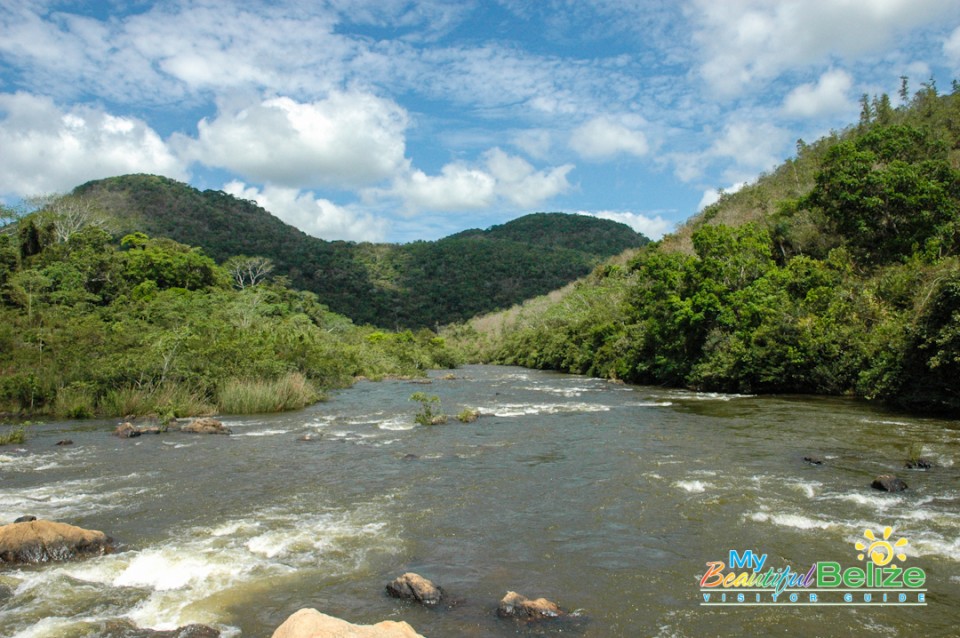 We are sad to leave Caracol, but we board the van to begin our exit from the Chiquibul National Park. A lunch stop at the Rio On pools last, for about two hours and is a bonus to our trip. Not only do we enjoy our typical Belizean Rice and Beans for lunch, but swimming in the naturally, cool and refreshing pools is a must-do of activity for the day! The dip into the pools reenergizes our body for the remaining journey back home, and in about four hours, we go from the mountains to the island. 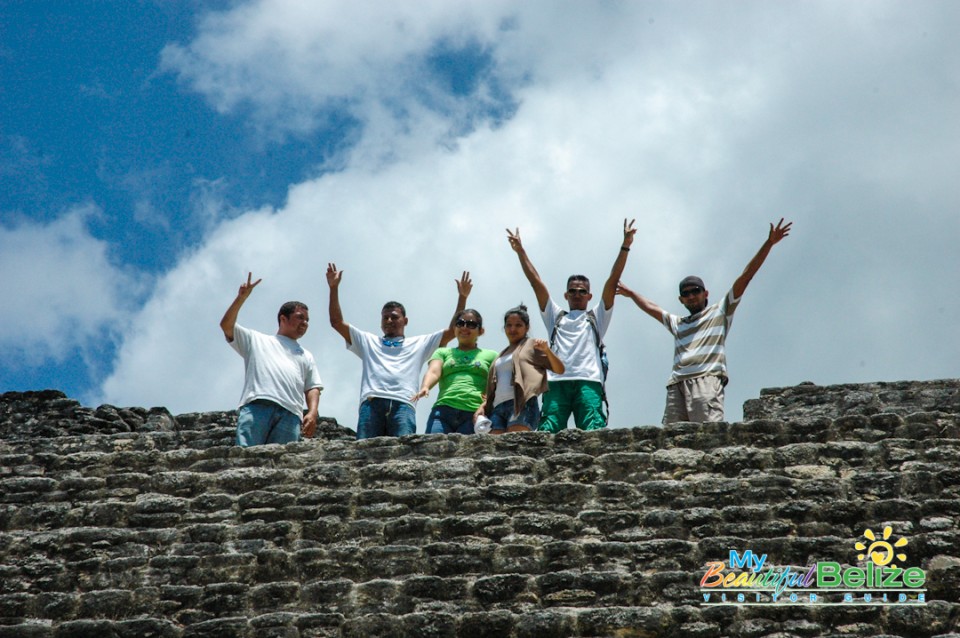 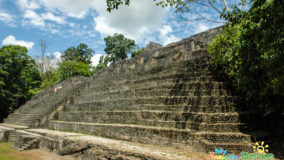 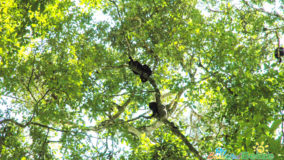 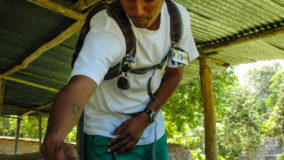 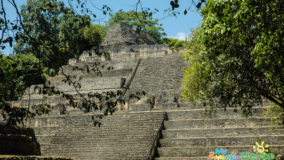 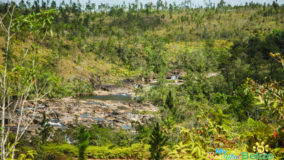 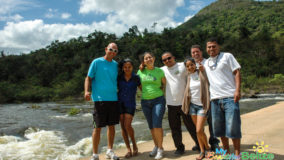 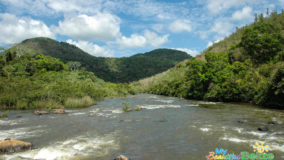 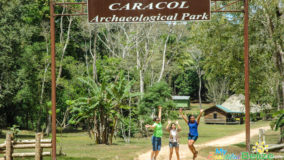 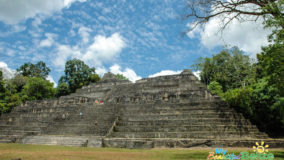 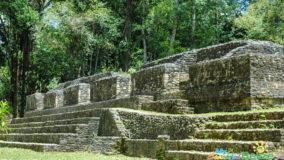 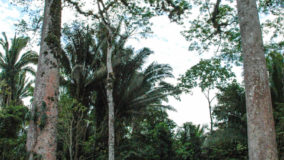 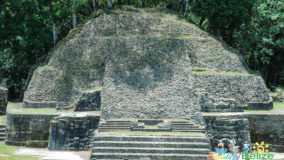 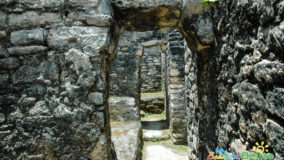 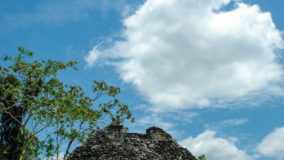 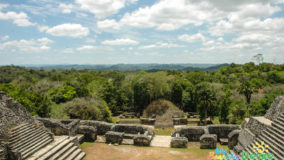 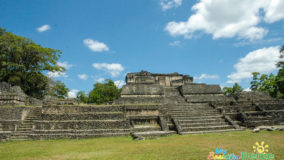 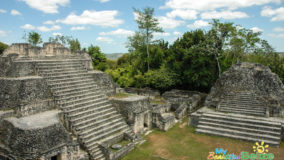 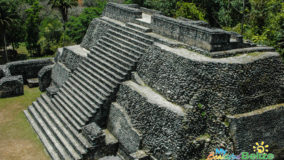