The Belize International Jazz Festival has gone from strength to strength with each year’s edition, and this year’s edition has set a new bar, with a total of 575 artists performing over eight days of concerts. 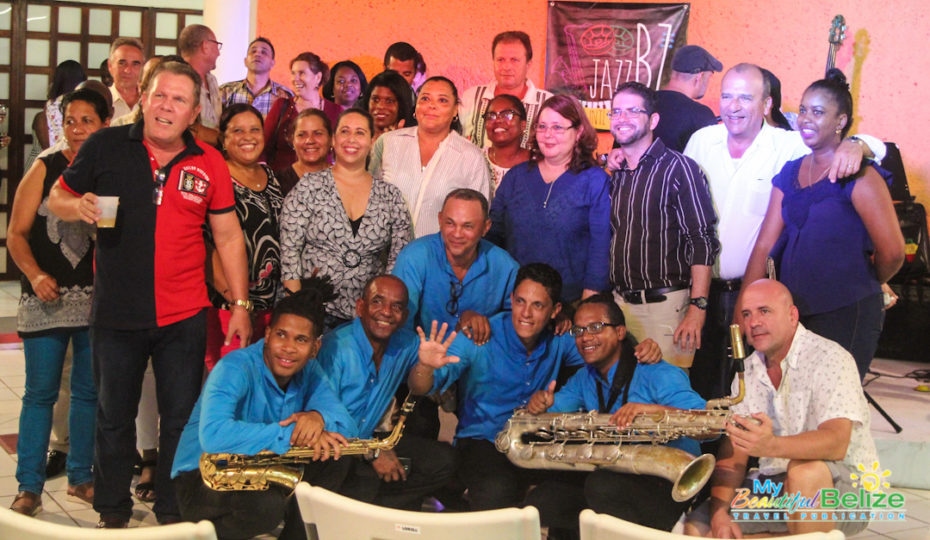 From Guantanamo, Cuba came the sax quintet Canatus, which opened the festival with a brunch concert on Father’s Day at the Radisson. Of course they included their interpretation of the popular classic: “Guantanamera”! They featured Randi Dayan Amador Verdecia on the baritone saxophone, group director Rene Alvarez Fonseca and Abel Espinosa Santiesteban on tenor sax, Maikol Armando Maza Brooks on alto sax, and Adonis Fernández Mulen on soprano and Alto sax. 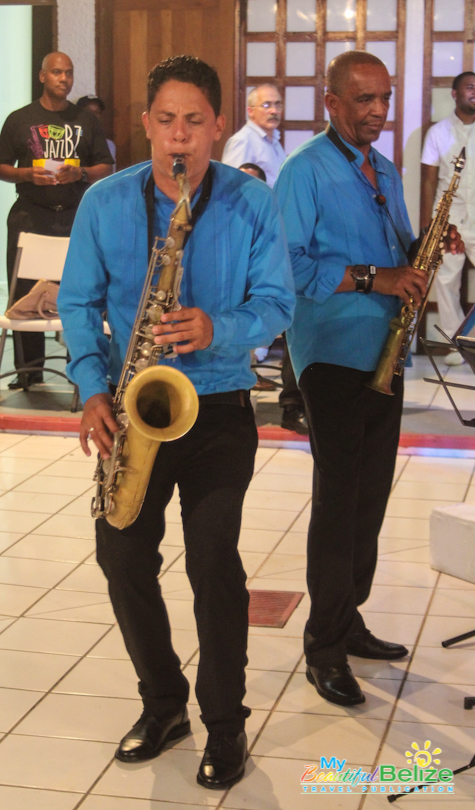 Canatus were joined by the Mexican trio los Tres Tristes Tangos in a welcome concert at the Institute of Mexico in Belize City on Monday evening, June 18. The Mexican trio featured Daniel Paz on clarinet, Silvestre Villarruel on accordion and keyboards and Jorge Gonzalez on the double bass. 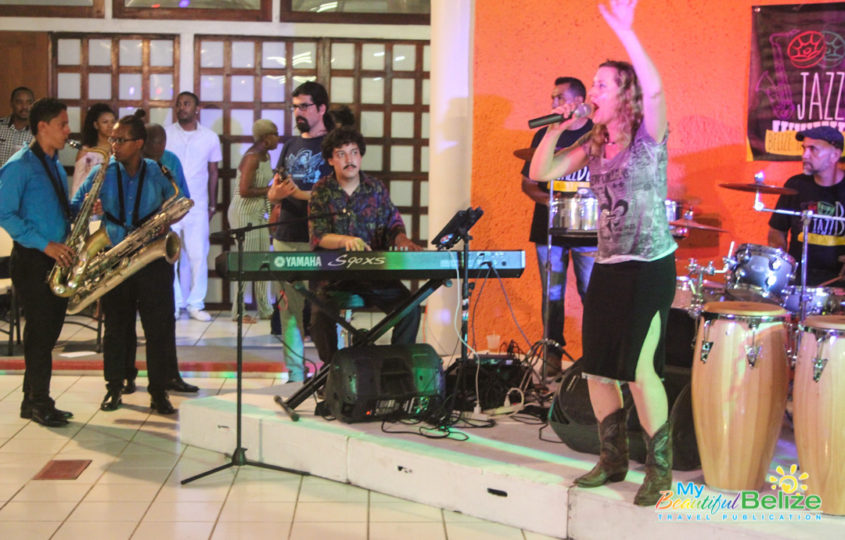 Dawn Drake, also from New York, had arrived ahead of her band Zapote, but lent her vocals to a creditable rendition of Sergio Mendes’ samba classic: “Mais Que Nada”.

Canatus returned to the Radisson’s Baymen’s Tavern for another jazz concert Tuesday night, and joined the Carlos Perrote and the Omolewa Osain Project at Spoonaz riverside café on Wednesday night. They also performed at the opening of at the opening of an art exhibition at the Image Factory on Thursday night. 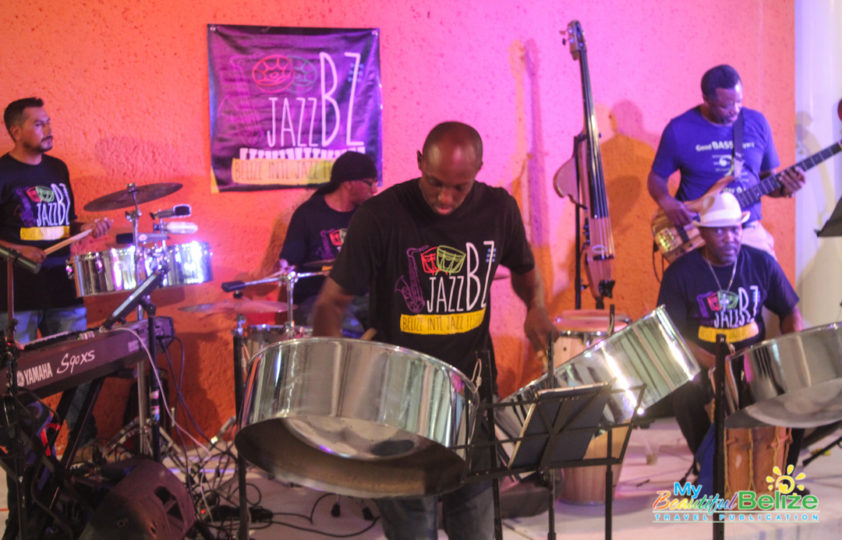 Thursday was also Ladies Night at the Radisson, where Dawn Drake and her Zapote all-girl band performed along with other artists Talia Rubinstein, Lathoosha Brown – both of the USA, and Belizean artist Giselle O’Brian.

The 4th Element from India performed in concert with Canatus and Talia at the Sit & Sip bar Friday afternoon June 22, while the Garifuna collective performed in a tribute concert to Andy Palacio at the Bliss Institute on Friday night, along with Guayo Cedeño and Coco Bar from Hungary, and the Omolewa Osain Project.

The Matamoros percussion ensemble from Mexico joined Pandemonium Steel Band, the Fourth Element and young upcoming Belizean singer Justin Castillo in a pan and jazz jam session at the Radisson on Saturday evening. 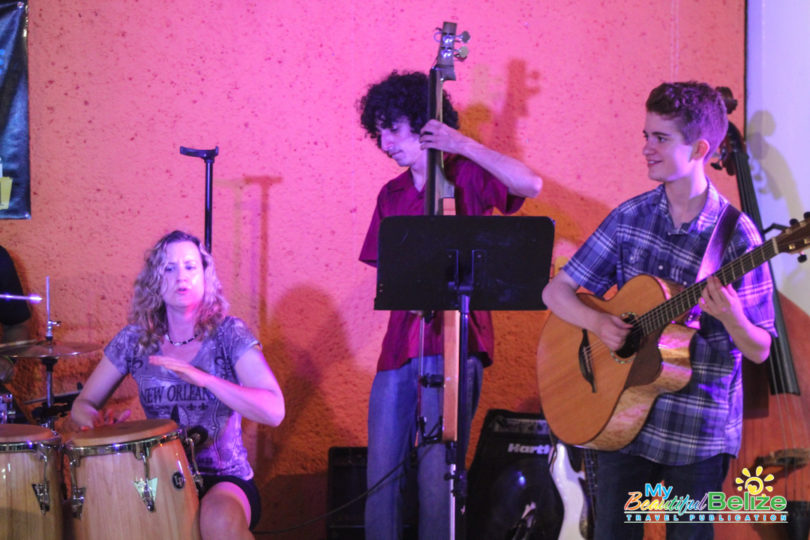 All bands join together for the closing concert at the Memorial Park on Sunday June 24th from 4:00 o’clock and into the night! These include the Pannerifix Juniors and Senior steel bands from Belmopan, the Pandemonium junior and senior steel bands of Belize City, the Holy Redeemer Steel Band and marching band, the Grace Primary Steel Band, the Caye Caulker Music Group, the St. Luke’s Methodist choir, the Belize Elementary School choir, Corosalza from Corozal, World Culture Band, the Marimba Academy from Benque Viejo, who join all the other aforementioned bands onstage.

During the days, the visiting artists conducted music workshops for young Belizean music students; Talia instructed a guitar workshop at the Pallotti Music School on Tuesday, Carlos Perrote and the Canatus’ musicians instructed a brass workshop at Wesley College on Wednesday, and the Mexican group from Matamoros joined Perrote in conducting a percussion workshop at the St. John’s Junior College on Friday.